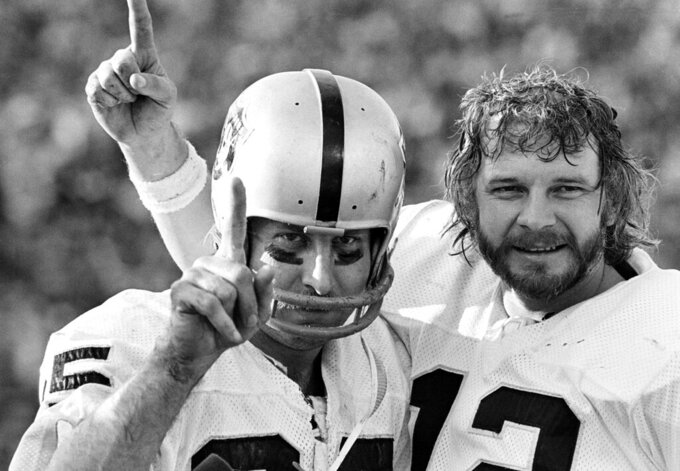 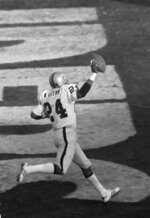 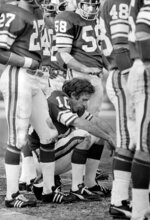 The victory in Super Bowl 11 was Oakland's first National Football League championship in two tries. For the frustrated Vikings, it was the fourth loss in as many appearances.

A record Super Bowl crowd of 100,421 jammed the Rose Bowl Stadium to watch the Raiders pick the Vikings apart with slashing runs by Davis and pinpoint passing by Stabler that left the Minnesota defense helpless.

The Raiders produced 429 yards of total offense, smashing the Super Bowl record of 358 set by Vince Lombardi's Green Bay Packers in the very first Super Bowl a decade ago.

Oakland, champion of the American Football Conference, moved through Vikings defenders almost at will, with Davis chewing up huge chunks of yardage and Stabler throwing only when he had to and completing almost all of the vital ones.

Stabler passed for one touchdown, Pete Banaszak ran for two others and Fred Biletnikoff caught two key passes of 17 and 48 yards that set up touchdowns.

Oakland bunched 16 points in the second quarter and, when the Vikings threatened a late comeback, the Raiders wrapped up the game with a pair of fourth-quarter TDs. The first one was set up by a 48-yard pass from Stabler to Biletnikoff; the final score came on a 75-yard interception return by cornerback Willie Brown.

Brown's return was a Super Bowl record and it was an appropriate conclusion to the wipeout of the Vikings. The Oakland defense did almost as much to build this victory as the Raiders offense.

The announced turnstile of the crowd of 100,421 was somewhat puzzling in light of the perfect Southern California weather — clear skies and temperature in the 60s. Super Bowl officials said all 103,424 tickets had been sold so that meant there actually were 3,003 no-shows for America's most popular sports event.

Part of the problem could have been reduced parking space around the Rose Bowl. Week-long rains have made the ground soggy and a golf course that usually takes on 7,000 automobiles for the Rose Bowl game could not be used for the Super Bowl.

The destruction of the Vikings actually started late in the first period after Minnesota had stunned the Raiders by blocking a Ray Guy punt.

Fred McNeil, bursting in from the left side, got to Guy, who never had a punt blocked before in four NFL seasons. The ball bounced crazily toward the end zone and looked like a Minnesota touchdown until it took one last hop backward and McNeill covered it at the 2-yard line.

It was the 16th blocked kick for the Vikings special teams this season, and put Minnesota in business with pay dirt waiting. But the Vikings never got there. Chuck Foreman tried right tackle for 1 yard and, on second down, linebacker Phil Villapiano jolted Brent McClanahan and the ball squirted loose. Willie Hall fell on it, and the Vikings' threat came up empty.

Starting from his 2, Stabler brought the Raiders back. On third down from the 5, Davis swept the left side and was sprung loose by Gene Upshaw's block. Davis streamed upfield for 35 yards and now Stabler had room to maneuver. He hit Carl Garrett for 11 yards and Dave Casper for 25 as the Raiders finished the first quarter on the move.

The drive reached the Vikings 7 when it stalled and Oakland settled for Errol Mann's 24-yard field goal, producing the game's first points.

Minnesota went nowhere on its next possession and, in a matter of moments, the Raiders were at it again.

This time, Stabler set up shop on the 36 and picked apart Minnesota's secondary. He completed five straight passes in a 10-play drive, hitting Cliff Branch for 8 yards and 2 yards, Dave Casper for 19, Biletnikoff for 5 and finally Casper for the score from the 1. Casper caught the ball in the middle of the end zone, 5 yards away from the closest Minnesota defender.

Fran Tarkenton couldn't get the Vikings moving again, and Neal Colzie's 25-yard punt return gave Stabler the ball on the Vikings 35. The way the Raiders' offense was moving, it was too close to stop them, and predictably, the Vikings didn't.

Davis, who gained 86 yards rushing in the first half, and Mark van Eeghen, who had 45, took turns running the ball to the 18. Then Biletnikoff made a diving catch at the 1 and Banaszak took it in on the next play.

Mann missed the extra point and the Raiders took a 16-0 lead into the dressing room at halftime.

The intermission extravaganza was a spectacular card show performance created by Walt Disney Productions in which the record crowd participated. The way the football game was going, the NFL might have had a better show by letting the halftime spectacle continue instead of bringing the Vikings back for more punishment from the Oakland offense.

Midway through the third period, the Raiders got on the scoreboard again, this time on a 40-yard field goal by Mann. The 3-pointer was set up by another slashing run by Davis, this one for 18 yards, and a 10-yard pass from Stabler to Branch.

That made it 19-0 and now the Vikings were in desperate mode for some points. Tarkenton threw three straight incomplete passes and it looked like Minnesota would have to surrender the ball on the punt. But Ted Hendricks crashed into punter Neil Clabo and the Vikes retained the ball on the penalty.

Given the second chance, Minnesota converted. Tarkenton hit Stu Voigt and Ahmad Rashad with clutch passes and found Foreman on a fourth-down pass for 10 yards that allowed the Vikings to keep the ball. Then Sammy White caught an 8-yard pass for Minnesota's first touchdown — the first TD pass for a frustrated Tarkenton who has been in three of these classics, hasn't won yet and had guaranteed a victory in this one.

When Oakland surrendered the ball on downs in the fourth period, Minnesota started moving again. Twice Tarkenton hit White — 14 and 18 yards — but each time the Minnesota rookie paid dearly for those catches as his helmet was jolted off his head on each tackle.

The Vikings reached the Oakland 39, but then Hall picked off a Tarkenton pass, halting the drive. A moment later, the Raiders were back on the scoreboard.

Stabler hit Biletnikoff for 48 yards on a play that just missed going all the way. Banaszak added the final 2 yards for the TD.

Then, with the frustrated Tarkenton throwing bombs, Brown picked off another and zoomed 75 yards for the final Oakland touchdown.

By then the issue was settled, and backup quarterbacks Mike Rae and Bob Lee of Minnesota ran out the final minutes of the game. Lee hit Voigt on a 13-yard touchdown pass with 25 seconds left, capping an 86-yard drive and giving the Vikings their final score.

The victory shattered the losers image for the Raiders, who had won nine division championships in 10 years but made it to the Super Bowl only once before, in 1968. That year, the Packers beat them 33-14, almost identical to the score by which they whipped the Vikings on Sunday.

After that, the Raiders were repeatedly bounced out of the playoffs in preliminary or championship games, continuing a frustrating string of failures.

Now the frustration is over. But for Minnesota, it continues.

Davis and Stabler accounted for 317 of the Raiders' record-setting 429 Super Bowl yards gained. Stabler connected on 12 of 19 passes for 180 yards and one touchdown. His longest toss was for 48 yards and he was sacked only once and never intercepted.

Davis carried the ball 16 times for a career-high 137 yards, his longest gain 35 yards, as the Raiders averaged 5.1 yards per carry on the ground.

The Raiders won 13 games in a row, finishing with a 16-1 record that included a victory two weeks ago in the AFC title game over two-time defending Super Bowl champion Pittsburgh. In retrospect, that was a harder victory than Sunday's.