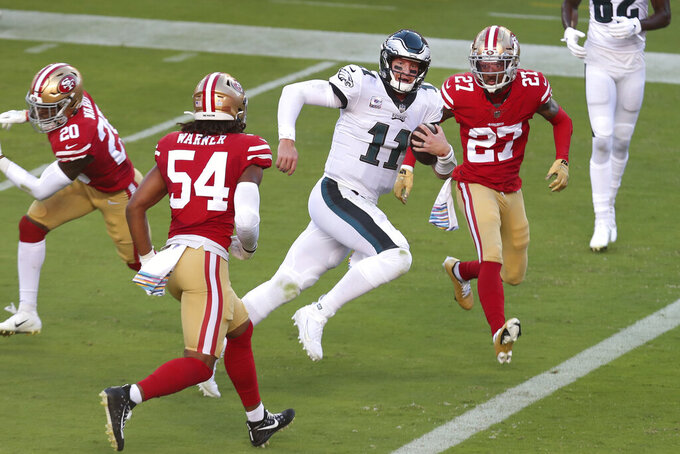 Philadelphia Eagles quarterback Carson Wentz (11) runs for a touchdown against the San Francisco 49ers during the first half of an NFL football game in Santa Clara, Calif., Sunday, Oct. 4, 2020. (AP Photo/Jed Jacobsohn) 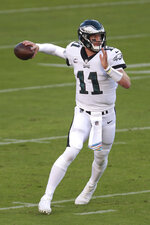 PITTSBURGH (AP) — Ben Roethlisberger didn't spend his unexpected weekend off just hanging around. It's impossible when you're the father of three young children.

So the Pittsburgh Steelers quarterback headed outside to play catch with his son Benjamin after the NFL postponed last week's scheduled trip to Tennessee because of a COVID-19 outbreak among the Titans. The 38-year-old Roethlisberger focused on keeping his surgically repaired right elbow loose and trying not to let the outside forces that have disrupted the familiar rhythms of the regular season get to him.

“It’s tough, especially for someone like myself who was just starting to kind of get back in the flow of things,” Roethlisberger said. “It’s not easy, but you have to adjust. You have to adapt and do the best you can.”

For the unbeaten Steelers (3-0) that means trying to hit reset in time for Sunday's visit from cross-state rival Philadelphia (1-2-1). The erratic Eagles appear to be rounding into form following a sluggish start thanks in large part to a defense that's nearly Pittsburgh's equal when it comes to getting after the quarterback.

The Steelers lead the NFL in sacks per game (5.0). Philadelphia is second (4.2). Whichever offensive line does a better job keeping Roethlisberger or Eagles counterpart Carson Wentz upright will likely have the upper hand. Wentz has taken to taking off behind a makeshift offensive line, adding an element Pittsburgh's front seven hasn't faced yet this season.

“I love being on the move and extending plays, making things happen,” Wentz said. “I think it puts a lot of stress on the defense. Obviously, I have to be smart and know when to take my chances and know when to throw the ball away. Especially with a team that plays a lot of zone coverage, when plays break down, they’re out of position or guys are coming open down the field. When that happens there’s a lot of big plays to be had when you do escape and move the pocket.”

If Wentz does it effectively, the Eagles could put their ugly start firmly in the rearview mirror. A victory for the Steelers would push them to 4-0 for the first time in 41 years.

Considering the uncertain nature of trying to play a season in the middle of a pandemic, winning becomes an even more valuable commodity because — as Pittsburgh learned last week — you never know what's around the corner. It could be another opponent. It could be a game of catch with your kid.

The Steelers will allow 5,550 fans into 68,400-seat Heinz Field for the first time this season after Pennsylvania officials eased the restrictions on the size of outdoor gatherings. While that's less than 10% of capacity, it's also a marked departure from Pittsburgh's first two games played in front of a sea of empty yellow seats.

“To go into all this and say, ‘No fans, man that is so weird,’ now saying 'There's going to be fans in the stands, man, that is so weird,'” Steelers tight end Vance McDonald said. “It's probably not going to be that significant but at the same time, it's a little bit back to normal.”

The Eagles dominated the Steelers 34-3 in their previous meeting in 2016 to improve to 3-0 in their first season under Wentz and then-first-year head coach Doug Pederson. Philadelphia sacked Roethlisberger four times and forced him to commit two turnovers. The faces of Pittsburgh's offense have largely changed over the past four years, though the Eagles remain wary of the wide variety of playmakers at Roethlisberger's disposal.

Ten different Steelers have at least four touches through three games. Running back James Conner has topped 100 yards rushing in consecutive games for the first time since the first half of 2018 and wide receivers JuJu Smith-Shuster and Diontae Johnson are part of a young and diverse pass-catching group.

“There’s a lot of things, but it’s one of those teams that I think if you devote too many resources to take any one player or one aspect of their offense away, they certainly have the capability to make you pay in other ways," Eagles defensive coordinator Jim Schwartz said. "So it’s going to take a good, solid team outing to play well on Sunday.”

The Steelers have recorded a sack in 60 straight games, the longest active streak in the NFL and the fourth-longest all time. Outside linebackers T.J. Watt and Bud Dupree are hardly doing it alone. Eight different Steelers have at least half a sack. It's much the same for the Eagles, who have 17 sacks spread among 13 players, including defensive tackle Javon Hargrave, who signed with Philadelphia in the offseason after spending his first four years in Pittsburgh.

“They’re penetrators, they’re disrupters,” Steelers coach Mike Tomlin said of the Eagles' front seven. “They pick off pullers. They create unblocked linebackers at the point of attack. We have to do a good job of neutralizing that group, covering them up and working to minimize their impact on the game.”