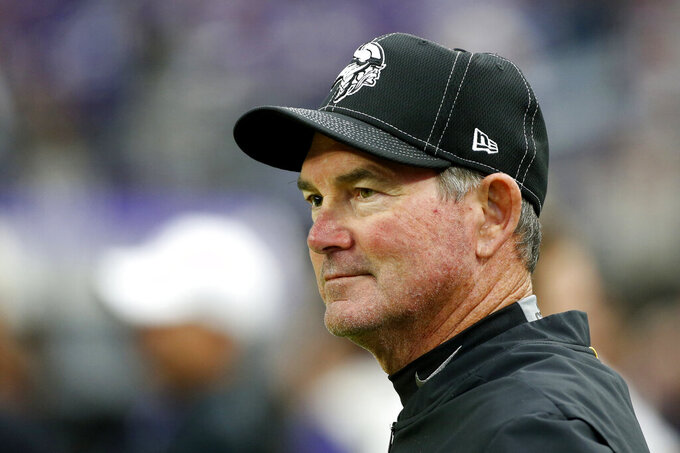 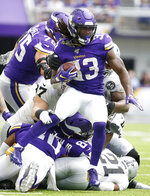 If the Vikings return the favor on Sunday, the climb toward a second straight division title would be a steep one.

"This is a division game, right?" Bears coach Matt Nagy said. "At home against a pretty good defense and an offense right now that's like tops in the league in running the football. ... You better come ready to buckle-your-chinstrap type deal. So the game is big. It's a division, it's at home. All these division games, we're 0-1 right now at home versus a division opponent."

The Bears (2-1) opened the NFL's 100th season with a 10-3 loss at Soldier Field to Aaron Rodgers and the Green Bay Packers. And they'll try to avoid an 0-2 start at home with another loss to a division rival when they host the Vikings (2-1).

Chicago has won two in a row on the road since dropping the opener, beating Denver on a last-second field goal by Eddy Pineiro and dominating Washington 31-15 on Monday night. But after getting a breather against the Redskins, the Bears figure to face a more difficult challenge.

The Vikings have NFL rushing leader Dalvin Cook and a defense that can give quarterbacks more than a few headaches. Then again, Minnesota will have to contend with Khalil Mack and Co.

They had no luck last year, getting swept by Chicago for the first time since 2011.

The Bears took a big step toward securing their first division championship since 2010 with a 25-20 victory at home last season, and they kept the Vikings out of the playoffs by beating them on the road to wrap up the regular season.

Kirk Cousins had two of his three lowest passer ratings against Chicago and got sacked six times.

Bears quarterback Mitchell Trubisky delivered his best performance of the season after a sluggish start against winless Washington on Monday night — but not before he got reamed by his coach.

ESPN caught Nagy yelling at Trubisky on the sideline during a timeout on third down at the Washington 22 with 8:23 left in the second quarter. Three plays later, Trubisky and Taylor Gabriel connected for the first of three touchdowns in a span of just over six minutes.

"I have a little bit of a heated side to me at times, and I think there's nothing wrong with that, but Mitch does, too," Nagy said. "That's just today's world."

A coach yelling at a player generally wouldn't attract much attention. But Nagy has rarely — if ever — criticized his quarterback, at least in public.

Either way, Trubisky came through after struggling against Green Bay and Denver. The No. 2 overall draft pick in 2017, he was 25 of 31 passes for 231 yards and threw his first three touchdowns of the season. And he had no problem with Nagy getting on him.

"There's nothing wrong with showing a little emotion, it's part of the game," Trubisky said.

One way to keep Cousins protected will be to help Cook get going on the ground again. Cook has been so productive that Minnesota has only attempted an average of 21 passes per game, by far the lowest average of any team in the league.

Vikings fans will often wince thinking about watching their team play in Illinois, with a 3-15 record on the road against the Bears since 2000, but as coach Mike Zimmer was quick to remind reporters this week, two of those wins have come in the past four visits (2015 and 2017).

So is Soldier Field a daunting place to play?

"I don't know. That's what everybody told me when I got here. Then we won some games. I guess if you turn the ball over and you create penalties and you do dumb things, it's a pretty hard place to play," Zimmer said, before noting the Bears have lost their past two home games, to Philadelphia in the playoffs last season and to Green Bay in the opener this year.