Bengals draft strategy is to keep building around Burrow 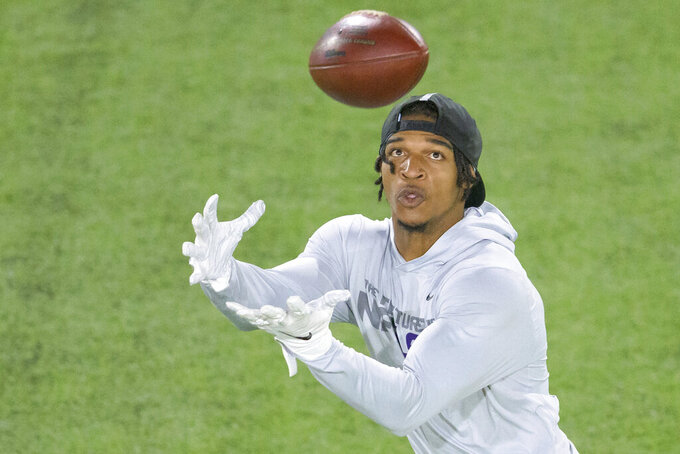 File-This March 31, 2021, file photo shows LSU wide receiver Ja'Marr Chase catching during a drill at an NFL Pro Day at LSU in Baton Rouge, La. Caleb Farley of Virginia Tech was the first top prospect to make the decision that has added a whole new layer of uncertainty to the annual crapshoot that is the NFL draft. Farley had plenty of players follow his lead, including several others set to be high draft picks next week like LSU receiver Chase, Oregon tackle Penei Sewell, Northwestern tackle Rashawn Slater and Penn State linebacker Micah Parsons. (AP Photo/Matthew Hinton, File)

CINCINNATI (AP) — One of the offseason priorities for the Cincinnati Bengals was upgrading the offensive line so second-year quarterback Joe Burrow can stay upright when he returns after knee surgery.

But with the fifth overall pick in the NFL draft, the Bengals might not be able to pass up an elite receiver who could be a huge playmaker for Burrow right off the bat.

The Bengals need a lot of help after finishing 4-11-1 last season. Fortunately for them, their biggest needs — offensive line, receiver and edge rusher — are considered the strongest position groups in this year's draft.

“Anybody we take with that fifth pick, the expectation is he’s going to come in and help us win immediately and play a big role,” said Duke Tobin, Cincinnati's director of player personnel. “We’ll have a vision for that guy. It won’t be a long development process for the guy we take there. His expectation will be to come in, be a starter and be a producer for us.”

Which way the Bengals go may depend on the availability of Penei Sewell, the 6-foot-6, 325-pound Oregon tackle, when they go on the clock. Sewell opted out of the 2020 season after winning the Outland Trophy in 2019 as college football's best offensive lineman.

Cincinnati could also take one of the terrific receivers available — Ja’Marr Chase, Burrow's old teammate at LSU, or Florida tight end Kyle Pitts — and still find a plug-and-play offensive lineman in the second round.

“You can’t look at it in a vacuum and say, if they don’t take a lineman at five, they don’t help Joe Burrow stay protected," NFL Network draft analyst Daniel Jeremiah said. “You can still do that at (No.) 38. There's going to be some good offensive linemen there as well.”

Cincinnati ranked 24th in rushing yards last season and gave up the third-most sacks in the NFL. Burrow was regularly battered by pass rushers and suffered a season-ending knee injury when the pocket collapsed on him in a Week 11 loss to Washington.

It's clear Tobin likes Sewell after attending his pro day at Oregon.

“Physically, exactly what you’re looking for. He’s strong, he’s big, he’s thick,” Tobin said. “He has balance, he’s got good movement for his position. He’s got versatility and again it appeared he took the time to get himself ready to go in the season that he had off.”

“In his second year in college football he won the Outland Trophy at 19. Think about that,” Cristobal said on the Bengals Booth podcast. “I don’t think it’s understood how incredibly advanced this guy is. But the more (NFL teams) watch film, they realize what his age is, you’re just not going to find a better prospect — I don’t think at any position.”

THRILL OF THE CHASE

Chase, who opted out of the 2020 season, was Burrow’s favorite target when LSU won the national championship in 2019. As a sophomore that year, Chase led the FBS in receiving yards and receiving touchdowns and won the Fred Biletnikoff Award as the country’s best receiver, with Burrow winning the Heisman Trophy and becoming the top overall pick by the Bengals in 2020. Tobin said there has been no lobbying on Chase's behalf by Burrow.

The Bengals dealt with another weakness via free agency with the signings of defensive linemen Trey Hendrickson and Larry Ogunjobi. They already have in place defensive end Sam Hubbard and interior lineman D.J. Reader, a big-money 2020 free agent signee who was injured most of last season. But with a league-low 17 sacks in 2020, the Bengals may be looking to add another edge rusher in the later rounds.