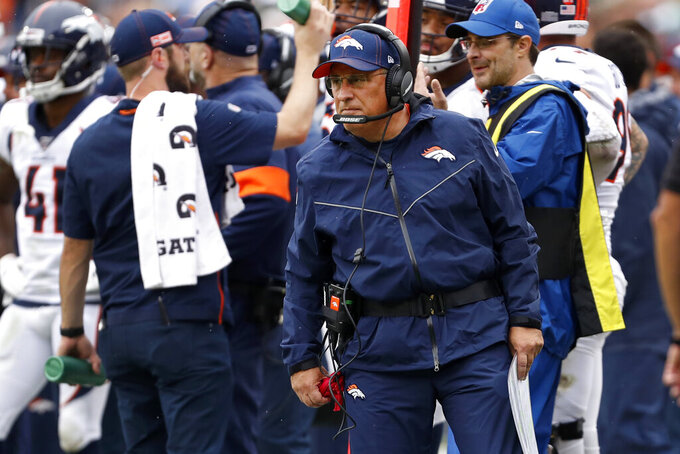 Denver Broncos head coach Vic Fangio watches from the sidelines during the first half of an NFL football game against the Green Bay Packers, Sunday, Sept. 22, 2019, in Green Bay, Wis. (AP Photo/Matt Ludtke)

Dating to the final two weeks of last season, Miller has tied his career-long sackless streak at five games.

Miller's curt news conference on Thursday caught the Broncos' off guard and led to speculation he might be unhappy having to play more coverage or containment rather than just getting after quarterback and adding to his 98 career sacks, which are the most in the NFL since his arrival in 2011 as the No. 2 overall draft pick.

Fangio said he wasn't aware Miller was planning to give a statement, wave and walk off the podium.

"He might be tired of answering the same questions over and over again," Fangio said. "But I don't see it as a big deal."

Although Miller has been melancholy at times in front of the media this season, he was in a jovial mood in the locker room Friday, joking around with teammates.

Fangio said his team's mood has been good at practice this week, too.

"I don't want to paint the picture that they're OK with it, but work this week has been really, really good," Fangio said.

Fangio is holding out hope that DB Kareem Jackson and ILB Josey Jewell, both of whom pulled hamstrings last week at Green Bay, will be available Sunday.

Jewell returned to practice Friday but Jackson hasn't practiced all week and will have to run full speed over the weekend to be active against Jacksonville.

If he can't go, Duke Dawson Jr. will make his debut at nickel back.

Fangio said he was stumped but not surprised by the eyebrow-raising pass interference ruling in the Eagles-Packers game Thursday night.

Green Bay challenged a non-call, believing Marquez Valdes-Scantling was interfered with on a deep pass. Eagles DB Avante Maddox had his left hand jammed into the receiver's facemask as the ball was arriving, but the league ruled "there was no clear and obvious evidence" that Maddox "significantly hindered" Valdes-Scantling.

After seeing that non-call stand, Fangio told reporters: "You guys will be extra light on me if you thought I should or shouldn't challenge something. You guys have seen it. What would you do? Yeah, there's obviously some disconnection there. I'm not surprised about it because the whole meeting at the league meetings when all this was started was dysfunctional, so it doesn't surprise me. ... It just wasn't in my opinion well thought-out, well-prepared and a little haphazard."

His boss, John Elway, sits on the NFL's competition committee, and Fangio said, "John's as frustrated with it as anybody else."