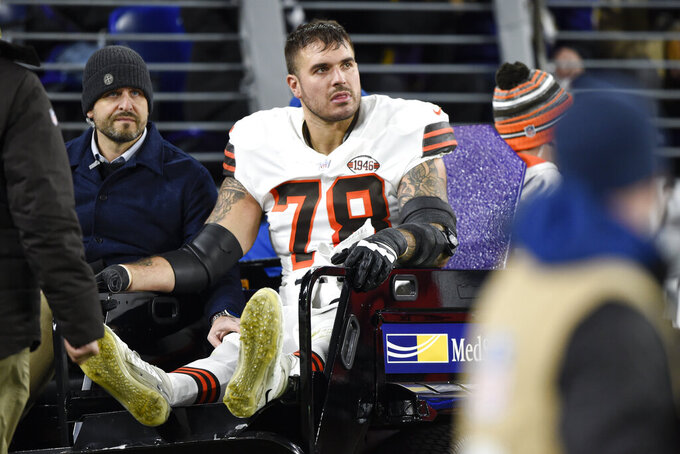 FILE - Cleveland Browns offensive tackle Jack Conklin leaves the field on a cart during the first half of an NFL football game against the Baltimore Ravens, Sunday, Nov. 28, 2021, in Baltimore. The Browns placed Conklin on the active/PUP list on Tuesday, July 26, 2022, at the start of their training camp. (AP Photo/Gail Burton, File)

BEREA, Ohio (AP) — Cleveland Browns starting offensive tackle Jack Conklin was activated from the physically unable to perform list on Monday, another major step in his return from a season-ending knee injury.

A two-time All-Pro, Conklin played in just seven games last season before tearing his patellar tendon on Nov. 28 at Baltimore and undergoing surgery. The 27-year-old has been dedicated to his recovery and is on track to be ready for the start of the season.

Conklin, who is in his final season under contract, is expected to be limited in practice before returning to the first-team offense.

Versatile veteran Chris Hubbard has been filling in for Conklin. He missed last season after tearing his triceps in the opener.

The Browns also waived undrafted rookie receiver Isaiah Weston with an injury designation. He was carted off the field Saturday after injuring his knee.

Cleveland is thin at receiver with Anthony Schwartz (knee) and rookie David Bell (foot) out with injuries. The team signed receiver Derrick Dillon.