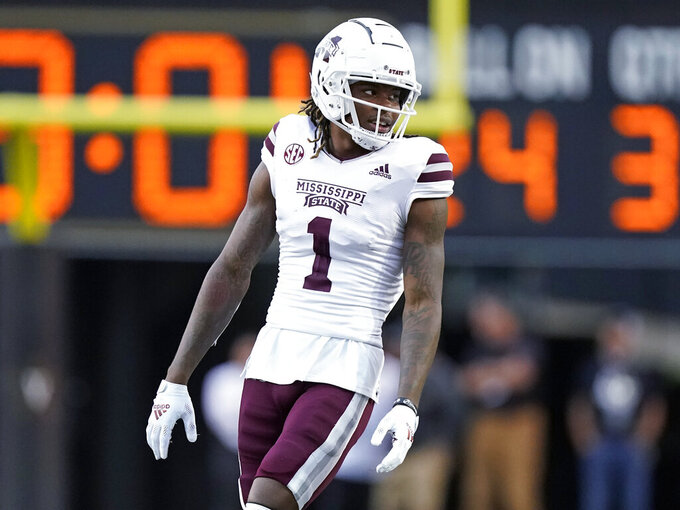 FILE - Mississippi State cornerback Martin Emerson plays against Vanderbilt during an NCAA college football game Oct. 23, 2021, in Nashville, Tenn. Emerson was selected by the Cleveland Browns during the third round of the NFL draft Friday, April 29. (AP Photo/Mark Humphrey, File)

BEREA, Ohio (AP) — The Browns finally joined the fun and made a trade in this chaotic, changing-by-the-minute NFL draft.

Just not the deal everyone's awaiting.

Cleveland made another offseason swap with Houston — this one much less significant than last month's blockbuster for Deshaun Watson — and dropped to the third round to take Mississippi State cornerback Martin Emerson with the No. 68 pick on Friday night.

The Browns' other objective this weekend is to trade Mayfield, who four years ago was the first player picked.

That move hasn’t happened yet, and one of Cleveland’s potential trade partners may be out of the mix.

The No. 1 overall pick in 2018, Mayfield became expendable when the Browns acquired Watson, a three-time Pro Bowl QB who is still facing civil lawsuits in Texas from 22 massage therapists alleging sexual misconduct.

Carolina and Seattle seemed to be the most likely trade destinations for Mayfield, who went 29-30 in four sometimes turbulent seasons as a starter and led Cleveland to the playoffs, but didn’t develop into the franchise QB the Browns had hoped.

However, the Panthers now seem out of play after trading up into the third round to take Mississippi QB Matt Corral, who will compete with Sam Darnold for the starting job.

Carolina didn’t initially have a pick in the second or third rounds, and there have been numerous reports the Panthers have been in steady communication with the Browns the past two days about Mayfield, who is due to make $18.8 million next season.

“That’s a fluid situation and we’ll deal with it day to day,” Berry said. "My focus has really been on the guys that we acquired, the guys who are going to be rookie players next fall.”

Mayfield's fully guaranteed contract appears to be the main reason the Browns haven't been able to unload him. Cleveland may have to absorb some of the money in order to get rid of the 27-year-old.

Berry dismissed the idea that failing to trade Mayfield this weekend would be a failure.

“We’ll feel fine,” he said. “The focus is really on the players that we can add to the team and we’ll deal with that situation as it progresses.”

The Browns didn't have a first-round pick Thursday night — and won't have one the next two years — following the Watson trade, but that didn't stop Berry from trading his highest pick, No. 44 (a second-rounder) for No. 68 to take Emerson.

The 6-foot-2, 200-pound Emerson gives Cleveland some depth at cornerback behind Pro Bowler Denzel Ward and Greg Newsome II, selected by the Browns with the No. 26 overall pick last year.

The team also has nickel back Troy Hill and Greedy Williams, a second-round pick in 2019.

“Great players and just going in and learning from them,” Emerson said on a call from Atlanta. "It's going to be great. I’m going to compete and bring everything I got. Excited to be a part of the team, be a part of that defensive back group.”

Before the deal, there were several quality options, including Michigan defensive end David Ojabo, Western Michigan wide receiver Skyy Moore and some other top cornerbacks, available at 44 for the Browns.

But Berry did more business with Houston, swapping 44 for 68 and getting picks Nos. 108 and 124, giving the Browns nine this weekend.

“It’s really just how the board fell at some of the different spots that we were targeting,” Berry said. "We felt good about the value and adding to volume of picks that we would have this weekend.”

Browns vice president of player personnel Glenn Cook believes the 6-foot-7, 270-pound Wright can play on the edge or inside. It also sounds as if he's something of a project.

“We don't expect him to come in and be perfect right away,” Cook said. “What we do love about him is he's big, he's long, he's physical. He'll definitely come in and contribute in the run game right away and then we can kick him inside and that will help us out on third down.”

Wright is excited about the chance to line up opposite All-Pro end Myles Garrett.

“We thought he had some of the best hands in this draft class,” Berry said. “He's also very savvy as a route runner, just very nuanced and polished and has the ability to separate. He can play outside and inside, but think he can really make a living with his size, his savvy and his hands in the slot.”