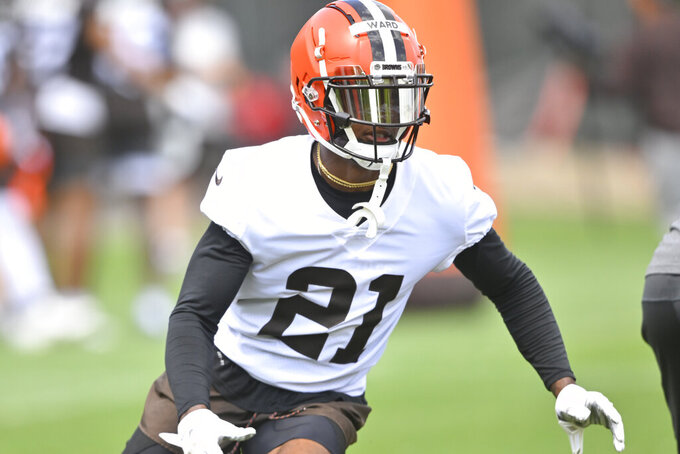 FILE - Cleveland Browns cornerback Denzel Ward participates in a drill during NFL football practice at the team's training facility on June 8, 2022, in Berea, Ohio. Ward will start training camp on the sideline after being placed on the active/physically unable to perform list Tuesday, July 26, 2022, as the Browns await the NFL's ruling on quarterback Deshaun Watson. (AP Photo/David Richard, File)

CLEVELAND (AP) — Pro Bowl cornerback Denzel Ward and starting right tackle Jack Conklin will begin Cleveland's training camp on the sideline after being placed on the active/PUP list Tuesday as the Browns await the NFL's ruling on quarterback Deshaun Watson.

Ward injured his left foot on the final day of minicamp last month. While tests showed no structural damage, the 25-year-old isn't ready to practice at full speed.

The fourth overall pick in 2018, Ward signed a five-year, $100.5 million contract extension in May.

Conklin is still rehabbing his right knee and isn't able to practice. A two-time All-Pro, the 27-year-old Conklin had surgery in December after rupturing his right patellar tendon against Baltimore and missing the final five games last season.

Coach Kevin Stefanski has expressed optimism Conklin will be ready for the Sept. 11 season opener against Carolina.

Also, linebacker Anthony Walker Jr. (groin) and defensive tackle Sheldon Day (back) were placed on the non-football injury list, a designation reserved for injuries sustained away from team activities.

Last week, rookie receiver David Bell was placed on the PUP list with a foot injury that's not believed to be serious. Bell was selected in the third round this year and is expected to have a major role in Cleveland's offense.

The injured players can be activated once they've passed a physical.

Browns veterans reported Tuesday with the team scheduled to have its first full-squad practice of training camp Wednesday with Watson's situation still unresolved.

The Browns had hoped to know by the start of camp if Watson will be suspended by the league for violating its personal conduct policy. He has been accused of sexual misconduct by two dozen massage therapists in Texas.

Sue L. Robinson, a former federal judge jointly appointed to handle league discipline, has been weighing Watson's case for weeks. The league has pushed for a long suspension while Watson's attorneys argued he shouldn't be punished because he wasn't criminally charged.