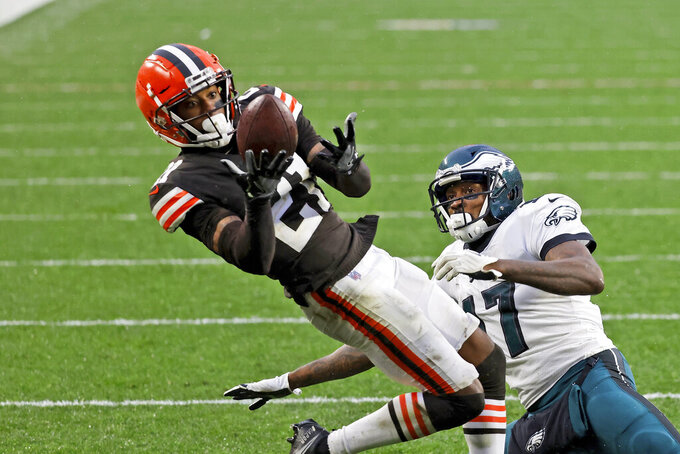 FILE - In this Sunday, Nov. 22, 2020, file photo, Cleveland Browns cornerback Denzel Ward (21) intercepts a pass intended for Philadelphia Eagles wide receiver Alshon Jeffery (17) during an NFL football game in Cleveland. Ward is expected to miss at least a few games with a calf injury sustained in Sunday's win over Philadelphia. Ward, who had an interception and several pass breakups, underwent an MRI on Monday, Nov. 23, 2020. (AP Photo/Kirk Irwin, File)

CLEVELAND (AP) — The Browns are down another defensive star.

Starting cornerback Denzel Ward, who leads the NFL in passes defensed and is coming off his best game this season, will miss time with a strained calf he sustained in Sunday's win over Philadelphia.

Ward's injury is just the latest to a big-name player for the Browns (7-3), who are already missing dynamic end Myles Garrett. He'll miss his second straight game this week at Jacksonville as he recovers from COVID-19.

Garrett, who has 9 1/2 sacks and made several game-swinging plays, tested positive for the virus last Friday. It’s not known when he’ll return.

Cleveland has managed to stay in the playoff picture despite not having running back Nick Chubb for four weeks, starting guard Wyatt Teller for three and wide receiver Odell Beckham Jr., who is out for the season with a knee injury.

To this point, the Browns have been able to overcome the injuries — and COVID issues — and are in position to make the playoffs for the first time since 2002.

On their day off, the team also placed defensive end Joe Jackson on the COVID-19 reserve list. He joins Garrett, fullback Andy Janovich and offensive lineman Chris Hubbard. Janovich and Hubbard have both also tested positive for the virus.

Jackson did not play in Sunday's game and hasn't played since Week 4 at Dallas. The Browns claimed him off waivers from the Cowboys in early September.

Ward intercepted Eagles quarterback Carson Wentz and had several pass breakups in the 22-17 win. He underwent an MRI on Monday. The Browns may place him on injured reserve, which would keep him out for at least three weeks.

Ward has been having a Pro Bowl-caliber season. He leads the league with 15 passes defenses and he's anchored a secondary decimated by injuries. Other than Garrett, he's easily been Cleveland's best defensive player.

Early in Sunday's game, Ward blitzed and hit Wentz just as he was delivering a pass, which was intercepted by linebacker Sione Takitaki and returned 50 yards for a touchdown.

Ward made the Pro Bowl in 2018 after the Ohio State standout was selected by the Browns with the No. 4 overall pick.

He was supposed to pair this season with cornerback Greedy Williams, but he suffered a nerve injury in his shoulder and hasn't played in 2020.

With Ward sidelined, the Browns could slide nickel back Kevin Johnson into his spot and use Tavierre Thomas in the slot.