Buccaneers look to get offense back on track against Chiefs 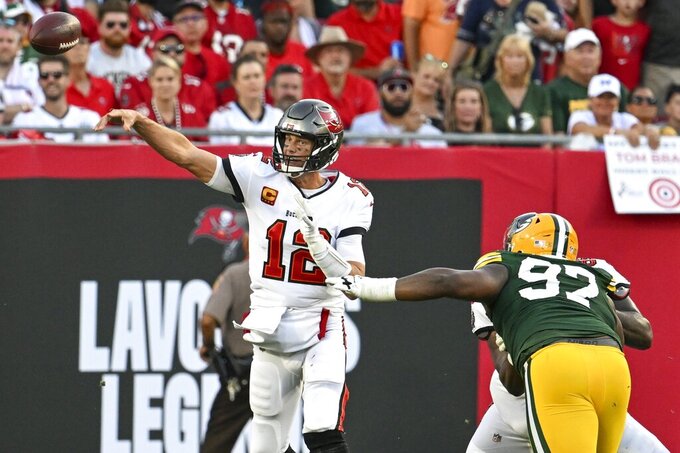 BETTING LINE: Chiefs by 1½, according to FanDuel SportsBook.

TURNOVER DIFFERENTIAL: Chiefs minus-1; Buccaneers plus-4.

CHIEFS PLAYER TO WATCH: Whoever is doing the kicking. Harrison Butker has been out since the opener at Arizona, when he sprained his plant ankle on the shoddy field. Fill-in kicker Matt Ammendola was solid in his debut, but missed a short field goal and an extra point last week in Indianapolis, part of a catastrophic meltdown by the Kansas City special teams. He was let go early in the week and the Chiefs signed former Jacksonville kicker Matthew Wright as insurance for Sunday.

BUCCANEERS PLAYER TO WATCH: WR Mike Evans returns from a one-game suspension for his role in an on-field melee at New Orleans two weeks ago. His absence last week against Green Bay left Tom Brady without his top three receivers. With Chris Godwin (hamstring) and Julio Jones (knee) also sitting out, Brady went head to head against Aaron Rodgers with a receiving group of Russell Gage, Breshad Perriman, Scotty Miller, Jaelon Darden and newly signed Cole Beasley, who made his Tampa Bay debut after just three practices. Brady threw for 271 yards, but only one touchdown.

KEY MATCHUP: Chiefs QB Pat Mahomes against a defense he lit up for 462 yards passing and three TDs in 2020, only to struggle later that season in a 22-point loss to Tampa Bay in the Super Bowl. Bucs LB Devin White had 12 tackles — two for losses — and an interception in the title game. LB Shaquil Barrett is looking for a sack in his third straight game vs. Mahomes.

KEY INJURIES: Butker (ankle) could miss his third straight game for Kansas City. DE Mike Danna (calf), RB Ronald Jones II (illness) and WR Mecole Hardman (bruised heel) missed practice this week. The Bucs likely will wait until late in the week to determine if Godwin, Jones and LT Donovan Smith (elbow) will play after sitting out the previous two games against the Saints and Packers.

SERIES NOTES: The Bucs have won six of the past seven meetings between the teams, including 31-9 in the Super Bowl two seasons ago. The teams also met during the regular season in 2020, with the Chiefs winning 27-24. Kansas City led 27-10 entering the fourth quarter before Brady tossed a pair of TD passes to Evans.

STATS AND STUFF: The Buccaneers relocated football operations to South Florida to avoid Hurricane Ian, practicing during the week at the Miami Dolphins training facility. ... The Chiefs are 45-2 since 2018 when holding their opponent to 27 points or fewer. ... Kansas City has hit a field goal in 16 straight games, tying the second-longest streak in franchise history. ... Chiefs QB Patrick Mahomes needs 152 yards passing to reach 20,000 for his career, becoming the fastest player in NFL history to accomplish the feat. ... Mahomes threw his first interception of the season last week in Indianapolis, ending a streak of 233 throws without one. It was the third-longest streak in franchise history. ... Chiefs TE Travis Kelce could move within one game of Tony Gonzalez’s franchise record by catching a pass in his 131st straight game. ... The Chiefs have had at least one sack in six straight games. ... Chiefs DE Carlos Dunlap needs two sacks to become the eighth active NFL player with 100. ... LB Nick Bolton had the first two sacks of his Chiefs career last week in Indianapolis. ... Chiefs CB L’Jarius Sneed had seven tackles, a sack, a quarterback pressure, a forced fumble and a fumble recovery against Indianapolis. ... In 17 regular-season home starts since joining the Bucs in 2020, QB Tom Brady has thrown for 45 TDs vs. 14 interceptions. ... Brady (10,622) and Mahomes (10,436) rank first and second in the league in passing yards since 2000. They are second and third in TD passes with 86 and 83, respectively, behind Aaron Rodgers (89).

FANTASY TIP: The Bucs have scored three offensive touchdowns — none on the ground — through three games. With Mike Evans returning from a one-game suspension, look for Brady to try to get the eight-time, 1,000-yard receiver more involved, especially in the red zone.