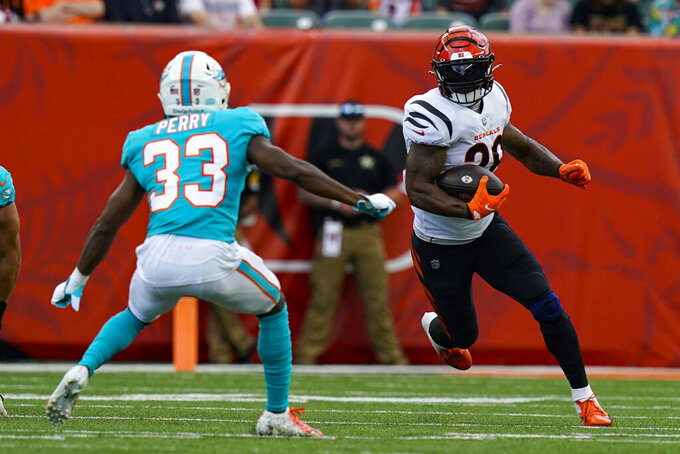 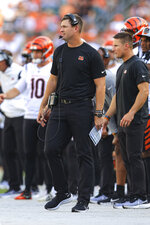 CINCINNATI (AP) — Plagued by injuries to key players — including franchise quarterback Joe Burrow — on top of all the pandemic-related disruption, last season was a special kind of mess for the Cincinnati Bengals.

There is plenty of reason to believe this season will be better than that 4-11-1 result for the moribund Bengals. But with preseason games behind them, questions linger.

Burrow, who had reconstructive knee surgery, is healed but had a bumpy training camp early as Cincinnati's offense struggled for rhythm. He was held out of the first two preseason games, and played just one series in the final one. He hasn't been hit hard yet.

“There was a lot of unknown there last November (when Burrow was hurt),” Taylor said. "I think to see him back in the huddle and get things back to normal is great for all of us.”

No. 1 running back Joe Mixon is healthy again, too, after missing the last 10 games with a foot injury. But he also saw little playing time in the preseason.

The Bengals have high hopes for receiver Ja'Marr Chase, the fifth overall draft pick in the spring who was a teammate of Burrow’s on the 2019 LSU national championship team. But Chase, who sat out the 2020 season, keeps dropping passes. He dropped three in a row in a preseason loss to Washington and then couldn't keep the handle on Burrow's only pass in Sunday's game, a loss to the Dolphins.

“I know what kind of guy Ja’Marr is and what kind of player he is. He will be ready to go Week 1,” Burrow promised.

Chase is expected to start alongside veteran receiver Tyler Boyd and Tee Higgins, who had a great rookie year in 2020 despite the team's struggles.

WHAT ABOUT THAT O-LINE?

The offensive line, a conspicuous weakness for Cincinnati in recent years, should be better than last season's spare parts crew. Center Trey Hopkins and left tackle Jonah Williams are healthy again, and free-agent pickup Riley Reiff is expected to solidify the right tackle spot. Draft picks Jackson Carman and D’Ante Smith are battling some veterans for playing time at guard.

After finishing near the bottom of the league in pass defense last season, Cincinnati wanted to make some changes at cornerback. Mike Hilton was brought in from Pittsburgh, Chidobe Awuzie from Dallas, and Eli Apple, whose last significant action was in New Orleans in 2019. Jalen Davis, who was added last year, turned some heads during the preseason.

The 38-year-old Taylor is 6-25-1 in two seasons as the Bengals head coach. Ownership was quick to express support for him after last season, but Taylor needs to win more in 2021. This year's team is considered his, with few players are left from the Marvin Lewis era.

“He’s got this opportunity. It’s critical to him and us both,” Brown said. “I really feel good about our chances. But I’m fully aware that you have to go out on the field and prove it. You can’t just talk about it.”

The Bengals drafted Texas DE Joseph Ossai, but he hurt his knee in practice and likely is out for the season. ... After signing a big free-agent contract in 2020, cornerback Trae Waynes tore a pectoral and missed the entire season. He played in the first two preseason games this time but injured a hamstring. He's day to day. ... Higgins was held out of last Sunday's game as a precaution because of some tightness in his back.