Carli Lloyd talks about those field goals, and her career 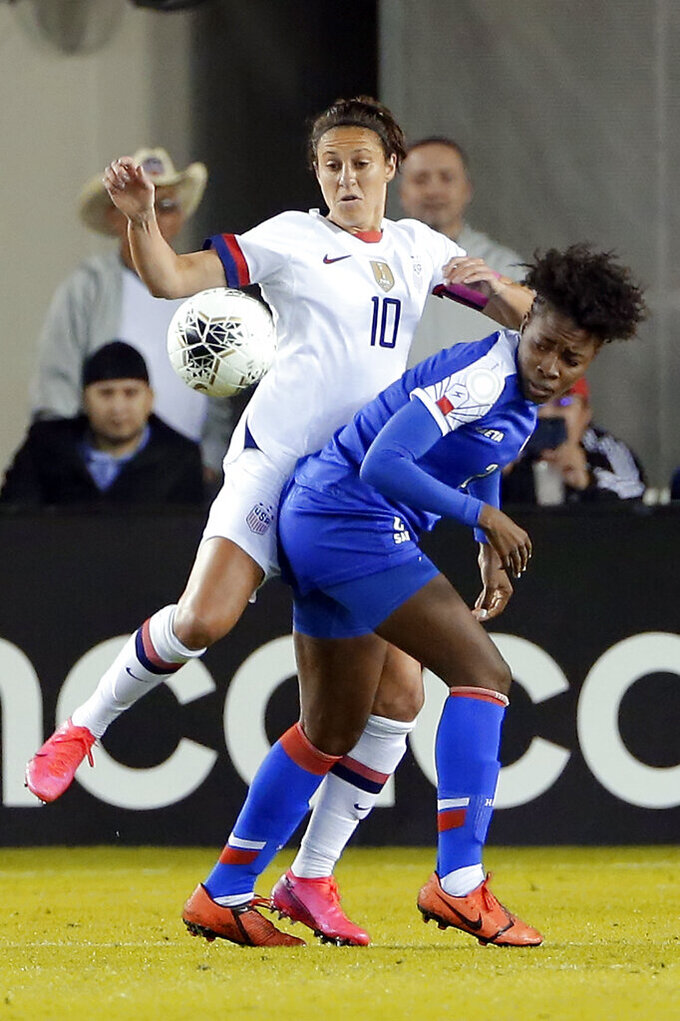 United States forward Carli Lloyd (10) and Haiti defender Soveline Beaubrun, right, collide as they go for the ball during the first half of a women's Olympic qualifying soccer match Tuesday, Jan. 28, 2020, in Houston. (AP Photo/Michael Wyke)

The sheer attention Carli Lloyd got for her field goals while dropping by an NFL training camp shows how far women's soccer has come.

Lloyd see it as something bigger.

The World Cup winner has been kicking — and making — field goals for several years now.

But she was honestly surprised by the reaction when she nailed a 55-yarder at the Philadelphia Eagles training camp last summer. The video went viral and a couple of NFL teams even reached out.

“I think that the conversation has been changing,” she said. “There's been so much talk about so many successful women, whether it's politics, companies, or athletes. I just think there's been a great buzz around that, and that's why it blew up. There's all this conversation about breaking barriers and being able to have the opportunity — the same opportunities that men have -- and it is great. I had a lot of messages of young girls saying, `I want to play in the NFL now,' which was really cool.”

Secret deodorant seized on the moment for a Super Bowl commercial starring Lloyd and fellow U.S. teammate Crystal Dunn. The ad shows a kicker making a game-winning field goal, then Lloyd removing her helmet in the big reveal. Dunn serves as her holder.

“I know that after I kicked my field goal at the Eagles' practice, the amount of female kickers, whether in high school or college, sending videos or tweeting at me, it was incredible. You know, I had no idea that there were that many female kickers out there," she said.

The commercial comes with a campaign, #KickInequality.

Probably best known for her hat trick in the U.S. victory over Japan to win the 2015 World Cup in Canada, Lloyd is now 37 and in the final phase of her career.

She had a more limited role last summer when the United States won the World Cup in France. But almost in spite of that, and her age, Lloyd had one of her best years and led the team with 16 goals. She's scored in three straight games, and in seven of her last eight.

She said she's adjusted with a more cerebral approach.

“The doubt, and the people saying I'm too old, and my situation with not playing much the previous couple of years, yeah, that lit a fire under me. That motivated me. But you've got to have internal motivation as well. And that's what I've always had,” she said. "I know that I've got a lot left to write in this last chapter. And as of now, I'm feeling the best that I've ever felt. I feel like everything in my career is in sync because the game has slowed down a little bit for me, because I've become a smarter player and a more efficient player."

The United States is currently in Houston for group play in the CONCACAF Women's Olympic Qualifying tournament. Lloyd started in the team's opener, scoring a goal in stoppage time that gave the Americans a 4-0 victory over Haiti on Tuesday.

The United States plays Panama on Friday. Eight teams in two groups are vying to reach the semifinals and finals in Carson, California. The top two finishers in the tournament earn the region's spots in the Tokyo Games.

The U.S. team has made the field for every Olympics since women's soccer was added as a sport in 1996.

If Lloyd makes the squad for Tokyo, it will be her fourth Olympics. At the Beijing Games, she scored in overtime for a 1-0 victory against Brazil in the final. Four years later, she scored both goals in the gold-medal match against Japan at Wembley Stadium, becoming the only player to score winning goals in consecutive Olympic finals.

Lloyd is not thinking retirement — just yet. She's waiting to see if the United States makes the field, and then if she makes the roster.

And after Tokyo? Don't count Lloyd out of an NFL kicking career.

“I've always been someone who never backed down from a challenge, I've always wanted to be in those pressure situations. But I've always been prepared,” Lloyd said. "The thing I've said publicly is, yes, I'm considering the opportunity if and when that ever happens. But first and foremost, I'm focusing solely on soccer right now. I don't know how much longer I'm going to play. I'm going to take it up until after the Olympics and then reassess.

"But there is the potential. I would want to make sure that I'm prepared and that I've kicked a thousand field goals and know what I'm getting myself into before I put myself into a situation where I don't have any opportunity to succeed," she said. "So that's that's sort of where I am that I'm leaving doors open and we'll see what the future holds."