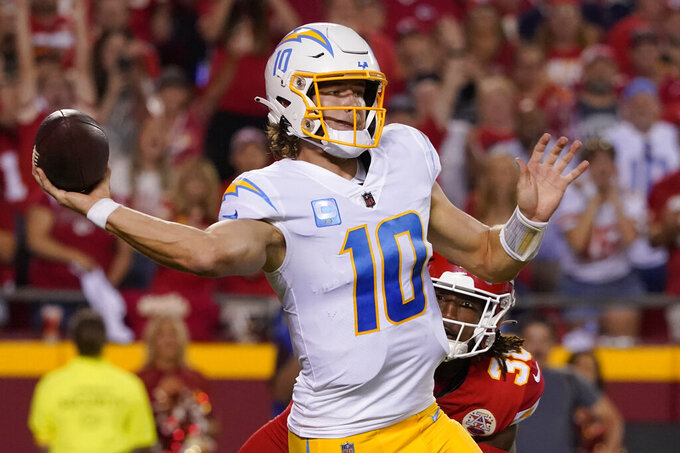 COSTA MESA, Calif. (AP) — Justin Herbert stood at the podium Friday answering questions about his rib injury and his recovery. Whether the Los Angeles Chargers quarterback will be able to perform in the pocket on Sunday remains to be seen.

Herbert was listed as questionable on the injury report after not participating in practice. Herbert sustain fractured rib cartilage after taking a hard hit from Kansas City defensive lineman Michael Danna during the fourth quarter of last Thursday night's game against the Chiefs.

Herbert was limited on Wednesday and went through most of his usual workload on Thursday as the Bolts prepare to host the Jacksonville Jaguars in a matchup of 1-1 squads. Herbert said he felt good going through Thursday’s practice, and that the plan is for plenty of rest before he goes through warmups before Sunday’s game.

“They feel good. Thank you," Herbert said when asked how his ribs felt. “There have definitely been improvements. ... Thankfully, we have a couple days left before we play. We don’t play today, and so that’s up to us, our team, to make the best decision so that we are ready to go on Sunday.”

Herbert will wear a rib protector but could also receive an injection to deal with the pain. He has made 34 consecutive regular-season starts, seventh among active quarterbacks.

Coach Brandon Staley said Chase Daniel would start if Herbert could not go. The 13-year veteran has six career starts, most recently in 2019 for the Chicago Bears.

This is Herbert's first significant injury since being the sixth overall pick in the 2020 NFL draft. He broke his femur as a junior in high school in 2014 and then had a broken collarbone three years later at Oregon.

Staley said Herbert looked good during Thursday's practice, where he did all the throws on routes he would normally do during a game.

“He’s tough. He doesn’t feel great, by any means, but he was able to go out there and throw the football,” Staley said. "I think a lot of it was seeing his response to each throw — then, obviously, after practice, and then this morning. We’re just going to keep knowing more as we go.”

The determining factor on if Herbert will play will likely come down to his comfort level.

“Looking back at it, I probably could have ran for the three or four yards to get the first down. I think that’s something that during the game, I felt like that was the best decision to make," Herbert said about that sequence. "In hindsight, I probably could have changed that, but to have those guys out there, and especially to have Dre (Carter) on the next play go out and make a play like that — I just had to put it out there and he went and ran across the field and caught it. I’m thankful that one worked out.”

Herbert's performance on that drive drew praise from everyone, including outside linebacker Joey Bosa, who has played with his share of injuries in his seven years.

“He’s just a great competitor and he’s a great leader. He’s trying to be more of that leader. He just leads by example, obviously," Bosa said. "Being out there and can’t even hold his arm up, but he’s out there, makes a bad throw and then the next throw, makes one of the most ridiculous passes on fourth down. That was unbelievable."