Chargers show no fear against Chiefs in AFC West showdown 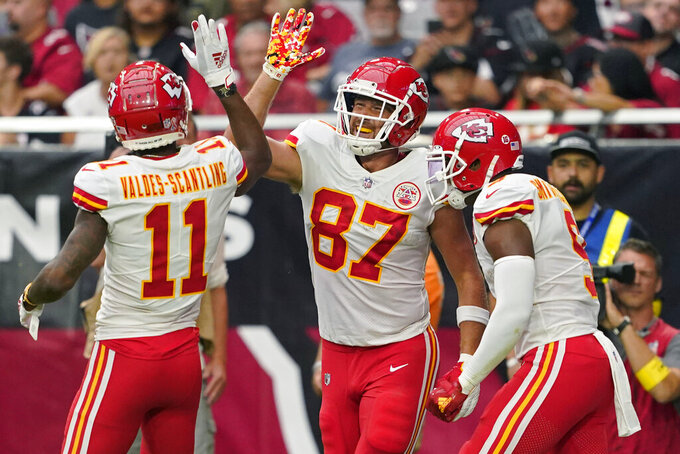 Kansas City Chiefs tight end Travis Kelce (87) celebrates with teammates after scoring a touchdown against the Arizona Cardinals during the first half of an NFL football game, Sunday, Sept. 11, 2022, in Glendale, Ariz. (AP Photo/Matt York) 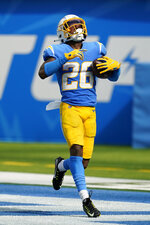 KANSAS CITY, Mo. (AP) — The Kansas City Chiefs have taken on an almost unbeatable air in the AFC West over the past six years, not only winning the division each time but losing just six games total against some of their longest-standing rivals.

Except when it comes to the Los Angeles Chargers.

They've showed no fear in splitting their past four meetings with Kansas City, including a win in Arrowhead Stadium last season. And after making a series of offseason moves — like signing Khalil Mack, who had three of their five sacks in their opener against the Raiders — designed to deal with Patrick Mahomes and rest of the Chiefs' dynamic offense, the Chargers have every reason to be confident about facing the Chiefs again on Thursday night.

“They came in last year and beat us,” Mahomes said. “They're going to be ready to go. They've won here. They're not going to be scared to come in and play. We have to have a better mindset that we have to play well from the start.”

The Chiefs did that in their opener in Arizona, when they marched for touchdowns on their first three offensive series and were never seriously threatened in a 44-21 romp. Mahomes ended up with 360 yards passing and five TDs, dismissing any notion that the Kansas City offense would languish without wide receiver Tyreek Hill.

The defense also played well, holding Kyler Murray and the Cardinals to seven points into the fourth quarter.

“I think the optics of Tyreek leaving — they were a really good football team. They had a lot of good players when he was there, too,” Chargers coach Brandon Staley said. “It's just when you have a player that's as special as Tyreek, maybe the other players don't get the same amount of attention. They've really onboarded a lot of players that allow them to truly spread the field and spread distribution, run and pass, and make them really tough to defend.”

For their part, the Chargers defended the Raiders quite well in a 24-19 victory that was well in hand most of the way.

Mack made the biggest dent, but Joey Bosa added 1 1/2 sacks and the Chargers finished with six as a team. They also picked off Derek Carr three times while forcing three fumbles, though the Raiders hopped on all of them.

This will be the first game shown exclusively on Amazon Prime as part of a $13 billion, 11-year pact to stream 15 regular-season Thursday night games along with one preseason game. Amazon first streamed Thursday night games during the 2017 season with CBS and NBC, then began doing the same with FOX the following year.

The Chiefs could be without kicker Harrison Butker, who sprained his ankle on a kickoff in Arizona, forcing safety Eric Reid to handle most of the kicking duties the rest of the way. They signed former Jets kicker Matt Ammendola to their practice squad and could elevate him for the game, but he would have little practice time with the rest of the kicking unit.

Kansas City emerged as one of the NFL's best offensive lines last season, allowing the third-fewest sacks in the NFL, and promptly held Arizona without a sack. The Chargers likewise did not allow a sack against the Raiders.

"I’m not surprised one bit to see how well they played because I’ve been seeing that all camp long," Chargers quarterback Justin Herbert said of his line. "They go up against two of the best pass rushers the NFL has seen in Joey and Khalil. To go up against those guys week in and week out, they’re going to get better. I’m thankful to be playing behind them.”

Chargers wide receiver Keenan Allen is expected to miss the game with a strained hamstring, leaving Joshua Palmer to start in his place. Herbert also will be counting on DeAndre Carter and Mike Williams, who has five career TD catches in Arrowhead Stadium, to help pick up the slack.

Arrowhead Stadium has long been among the toughest venues for visiting quarterbacks in the NFL; it holds the Guinness record for loudest outdoor stadium. Yet Herbert has a chance to join Craig Morton and Ken Anderson as the only QBs to win their first three starts there on Thursday night.

“Every year he seems to get better,” Chiefs coach Andy Reid said. "He's very smart. He understands where to go with the ball, so you know he’s got a real good grasp of the offense. And he’s accurate. He does a nice job and that’s not getting any worse as he goes, he’ll just keep polishing that moving ahead. The experience is everything now.”