Chargers' Staley understands scrutiny of call on fourth down 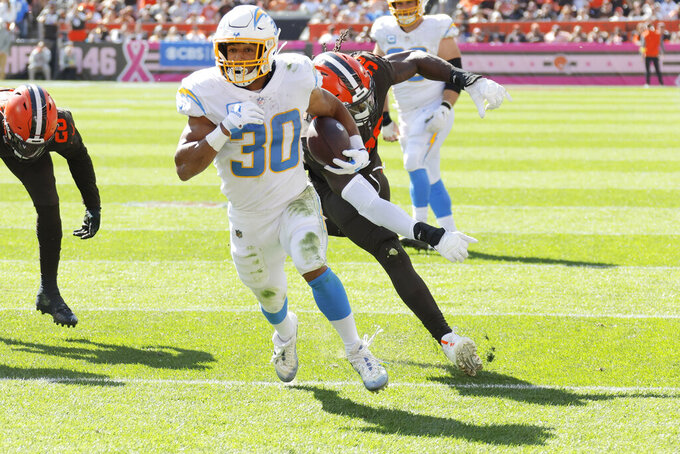 Los Angeles Chargers running back Austin Ekeler (30) stays ahead of Cleveland Browns defensive end Jadeveon Clowney (90) as he runs the ball in for a touchdown during the first half of an NFL football game, Sunday, Oct. 9, 2022, in Cleveland. (AP Photo/Ron Schwane)

Brandon Staley has deserved plenty of second-guessing for some of his decisions during his first two seasons as Los Angeles Chargers coach.

The one thing he can't be faulted for though is being consistent in his strategy, especially when it concerns going for it on fourth down.

The Chargers escaped Cleveland with a 30-28 victory over the Browns, but Staley's decision to go for it on fourth down late in their own territory and with the lead instead of punting was still one of the main topics on Monday.

The Chargers had fourth-and-1 at the LA 46-yard line with 1:14 remaining, up by two and with the Browns having used all of their timeouts.

The Browns drove to the 35, where Cade York was wide right on a 54-yard field-goal attempt.

Staley's call got a colorful response on Twitter from wide receiver Keenan Allen, who did not make the trip because of his hamstring injury.

Staley said he talked to Allen about the deleted tweet Monday morning and understood where he was coming from.

“Anyone that’s been a part of competition knows that when you’re not a part of it, you can feel some type of way. I’m understanding where he was at in that moment, because he’s not with his team. They’re in the fire. That’s the money down and he’s used to being out there,” Staley said.

Staley said at the beginning of training camp that the fourth down decisions would be a mixture of mindset and math, but it is clear that math won out in this situation. Win probability models from The Athletic and ESPN said to go for it while Next Gen Stats gave a slight edge to punting it. Even with not converting on fourth down, the win probability was above 50% in all three models.

When fourth down decisions backfired late last season against Kansas City and Las Vegas, Staley was adamant about the play calls. On this occasion it went right and improved the Chargers' record to 3-2.

“I think there’s 31 other coaches who are going through the exact same press conference I am right now. There’s gonna be some decision that some majority are gonna disagree with. You just have to have conviction in what you believe in and also transparent with your process, not feel defensive or insecure about it,” he said. “It doesn’t affect me from a decision-making standpoint. I understand there should be scrutiny on all the decisions that we make. It’s pro sports. And that’s what’s cool about sports.”

Austin Ekeler and the running game were able to break out. Ekeler had a career-high 173 yards on 16 carries, including a 71-yard run in the first quarter. The Chargers ran it 34 times for 238 yards and averaged 7.0 yards per carry.

Nick Chubb's 41-yard touchdown on the game's opening drive marked the fourth straight week the Chargers have allowed a run of at least 40 yards.

Per Sportradar, the only other times that has happened since 1974 was with the 1999 Pittsburgh Steelers and 2009 Oakland Raiders.

Taylor Bertolet connected on all three field-goal attempts and added three extra points in his NFL debut. Bertolet was signed to the practice squad earlier in the week after Dustin Hopkins suffered a right quadriceps injury and then was promoted the active roster on Saturday. Bertolet is the 11th kicker the Chargers have used since 2017.

Offensive left tackle Jamaree Salyer had a rough day in his second NFL start, but even veteran linemen have a tough time when having to go up against Cleveland pass rusher Myles Garrett.

WR Keenan Allen missed his fourth straight game because of a hamstring injury and remains day to day. RT Trey Pipkins and WR Joshua Palmer are dealing with knee issues.

5: Consecutive road games Mike Williams has had 100 yards receiving. That is tied with Cincinnati's Chad Johnson (2002-03) for the longest run by an AFC player. Detroit's Calvin Johnson was the most recent player to do it in six straight road games.

The Chargers have two straight home games before their bye week. They host Denver next Monday night. They have lost to the Broncos in four of the past six meetings. Los Angeles then has a short week before facing Seattle on Oct. 23.