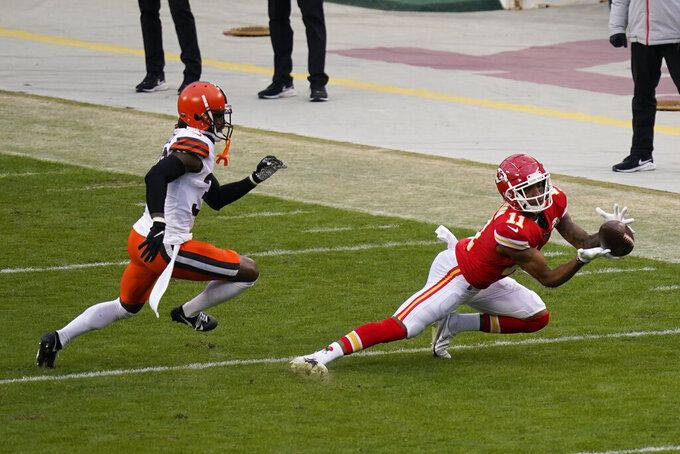 Chiefs coach Andy said he was told of the situation Sunday but could provide no other information.

Neither of the players actually tested positive for COVID-19, which means Robinson — a regular contributor — and Kilgore could still play in the Super Bowl. Both would need to return negative tests throughout the week to get off the list.

“The NFL has done a great job with it, presenting different safety things for the players to stay as safe as possible,” Reid said. “We've been hammering this point home forever. The problem is you're fighting the invisible man. It just gets you when least expected, and we're seeing that in everything. It's an unfortunate thing.”

The Chiefs have been largely clear of COVID-19 outbreaks this season, though several players have missed games after testing positive. They also are not changing the way they conduct business within their facility leading up to the game.

The big difference: Rather than heading to the site of the Super Bowl a week in advance, like they did last season, the Chiefs will fly to Tampa, Florida, the day before the game in an attempt to minimize contacts among players and the public.

“These guys were being as safe as they could be,” Reid said, “and we'll just see how it goes. But the league has built-in rules and regulations, so we follow those, and it'll all work out. It'll all work out for them when it's all said and done.”

Robinson appeared in every game this season, setting career highs with 45 receptions for 466 yards to go with three touchdown catches. He also can return kicks and punts and helps out with other special teams units.

“Obviously D-Rob is a big part of our offense and hopefully he's out there with us," Chiefs quarterback Patrick Mahomes said. "If not, we have guys that can step up. We'll just prepare to be the best team we can be.”

Kilgore started four games earlier this season when center Austin Reiter missed three games to an injury, and when the Chiefs rested their starters in Week 17 with the AFC’s top seed already secured. He also played some special teams snaps against the Buffalo Bills in the conference championship game.

“I hope that, one, it wasn’t a positive test for either one of them, and I hope that they stay COVID-free and go through the protocol,” Chiefs tight end Travis Kelce said. "I could only imagine, and I don’t even want to imagine, what it would be to have to miss the Super Bowl because of COVID. Hopefully, our guys, my brothers, can get back into the locker room and on the field and get out there because it wouldn’t feel right going into a Super Bowl without those guys.”

In other injury news, Reid said cornerback L'Jarius Sneed is out of the league's concussion protocol and will be available for the Super Bowl, and wide receiver Sammy Watkins should play for the first time since hurting his calf in Week 16.

Watkins has practiced for several weeks but did not play against Buffalo in the AFC title game.

The Chiefs also designated tight end Deon Yelder, who's been out with a groin injury, to return from injured reserve. He would provide depth behind Kelce and Nick Keizer while allowing Kansas City to use three-tight end sets.

By Dan Scifo 2 minutes ago
By Brian Dulik 2 hrs ago
By Tom Canavan an hour ago
By Teresa M. Walker 2 hrs ago
By Dennis Waszak Jr. 18 hrs ago