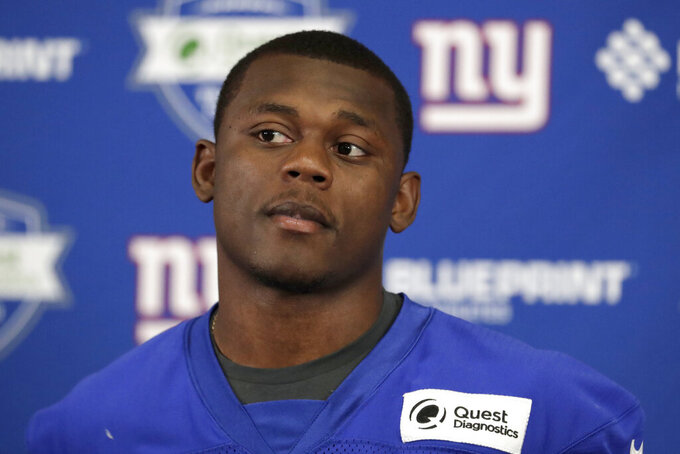 KANSAS CITY, Mo. (AP) — The Kansas City Chiefs are signing safety DeAndre Baker, taking a chance on the 2019 first-round draft pick after he was let go by the New York Giants amid legal problems, but subsequently had all charges against him dropped this week.

The Chiefs are signing Baker to the practice squad, though that may be a short-lived stop before he is elevated to the 53-man roster. Baker must first pass a physical and go through COVID-19 testing before he is allowed in the locker room.

Baker had been charged with four counts of armed robbery and four counts of aggravated assault with a firearm after he was accused of taking jewelry and cash at gunpoint during an incident in May. The Giants told Baker to stay away from their team while the legal process played out, and he ultimately was prosecuted for four counts of robbery with a firearm.

The alleged victims later recanted their stories and those charges were dropped after a South Florida attorney was arrested Monday for attempting to extort Baker — the 30th overall pick in 2019 — on behalf of three of the alleged victims.

Reid deferred most of the questions surrounding Baker to Chiefs general manager Brett Veach, who typically is not made available to reporters during the season. But the ultra-aggressive Veach has been known to take a chance on players with character questions, and more often than not they have worked out in the Chiefs' favor.

“I know when he gets here he'll see the environment we have,” Reid said, “and you know, he's going to be asked to work hard and keep his nose clean. That's what you do. We're very honest with that, and open, and when Brett deals with that he keeps it real with these guys, whoever we're bringing in. Anything else is unacceptable. That's how we go.”

The signing comes amid significant roster questions for Kansas City ahead of Sunday's game in Las Vegas.

Wide receiver Mecole Hardman remains on the COVID-19 list and was out of practice Wednesday. So were offensive linemen Eric Fisher, Martinas Rankin and Mitchell Schwartz, all of whom were added to the list on Monday.

Rookie cornerback BoPete Keyes was ill with a stomach virus and also wasn't at practice.

The Chiefs did get a bit of positive injury news: Defensive end Alex Okafor was back on the practice field after dealing with a hamstring injury, and wide receiver Sammy Watkins also could be available this week after a hamstring injury of his own.

His return would be especially welcome if Hardman remains on the COVID-19 list into the weekend.

“I mean, he's someone who is a threat in every way, the way he's able to catch the ball in traffic,” Chiefs quarterback Patrick Mahomes said of Watkins. “Hopefully he'll be back out there and we can incorporate him in the good stuff we've been doing lately.”