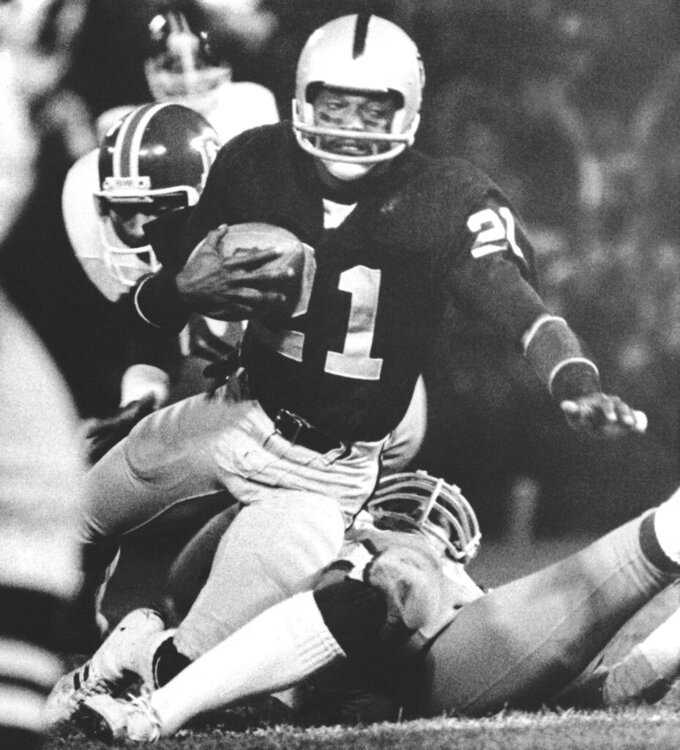 FILE - Oakland Raiders' Cliff Branch is brought down by Denver Broncos' Bob after picking up nine yards on a pass from quarterback Ken Stabler during the first period of an NFL football game on Dec. 3, 1978, at the Oakland Coliseum in Oakland, Calif. Branch was one of the best deep threats of his era to earn a spot in the Pro Football Hall of Fame. (AP Photo/Paul Sakuma, File)

Cliff Branch was the epitome of what Al Davis coveted in a receiver during his decades running the Raiders.

Branch arrived in Oakland with the game-breaking speed needed to fuel the Raiders' vertical offense and as soon as he learned to harness that speed and develop reliable hands, there was no stopping Branch.

Branch became one of the best deep threats of his era with some of his biggest performances coming on the game’s biggest stages to earn a spot in the Pro Football Hall of Fame on Saturday.

“He was a game-changer,” said Hall of Fame coach Tom Flores, who was a receivers coach for the Raiders when Branch arrived and was his head coach for seven seasons.

“He had one-of-a-kind speed and several gears with his speed. I had to coach him on how to slow down. That sounds ridiculous, but he was trying to run the routes I was teaching in mock speed and couldn’t do it. He was tripping and clumsy, so I taught him to glide. He could glide faster than most people could run. Then when you have the need, turn it on.”

Branch arrived in Oakland as a fourth-round pick in 1972 after catching just 36 passes his final two years in college at Colorado. But Branch also was a star sprinter who set the NCAA championship meet record in the 100 meters shortly before joining the Raiders.

That speed is what Davis wanted to team with future Hall of Famers Fred Biletnikoff and Dave Casper as the pass catchers for Ken Stabler. But it took until his third season for Branch to break out.

Flores said he was immediately impressed by Branch’s toughness over the middle and ability to learn the offense, but the only issue that kept him off the field early on was his hands as the frequent drops led to boos from the home fans.

“His first year he was impressive and when he was open he was wide open because he was so fast but then he would drop the ball,” Flores said. “But then in his third year, that’s when he really started to shine. That was the whole thing with Al, speed and fear and big-play guys. And he was a big-play guy.”

Branch made the first of his three straight All-Pro teams in his first season as a starter in 1974 and never looked back. He scored 67 touchdowns through the air, leading the NFL in TD receptions in 1974 with 13 and in 1976 with 12. Branch also had a league-high 1,092 yards receiving in 1974.

He was a force in the postseason, with 1,289 yards receiving. The Raiders won Super Bowls after the 1976, 1980 and 1983 seasons — the last one in Los Angeles, where the franchise moved in 1982 after protracted court fights before returning to the Bay Area in 1995. Branch was one of six players to play in all three of those victories, a list that includes fellow Hall of Famers Ray Guy and Ted Hendricks.

In 1983, Branch tied the NFL record with a 99-yard touchdown catch in a regular-season game. He stands third among Raiders pass catchers in yards receiving with 8,685, trailing Tim Brown and Biletnikoff — both Hall of Famers.

“I had him from his first day ever with the Raiders,” Flores said. “I watched him grow up. I’m so proud of what he became. He was a game-changer.”

The honor for Branch comes just over three years after he died at age 71 of natural causes, marking the second time in recent years that a Raiders great got inducted into the Hall of Fame posthumously. Stabler got inducted in 2016, a year after his death.

The long wait denied Branch the chance to enjoy the honor he had waited so long to receive after being a semifinalist in 2004 and 2010.