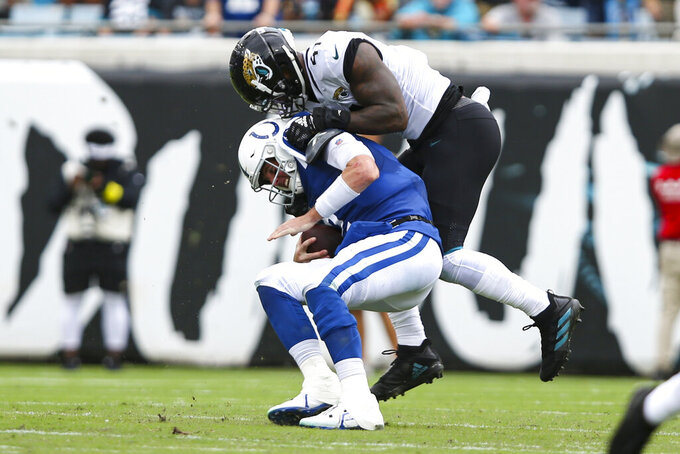 INDIANAPOLIS (AP) — The Indianapolis Colts thought Matt Ryan and Jonathan Taylor would be driving their offense.

Instead, the one-time league MVP and the NFL's defending rushing champ have become headliners on the the league's lowest-scoring teams.

Yes, two winless weeks into the season, Ryan, Taylor and coach Frank Reich find themselves stalling and scrambling for solutions.

“Collectively, we have not been good enough and go back to what Frank talked about Monday. We, individually, have to look at the things we can do better,” Ryan said Wednesday. “I know our group is doing that.”

At times, the Colts (0-1-1) have looked downright ugly. Through the first three quarters of their first two games, they've scored a total of three points.

They've already been blanked once and without a 17-point, fourth quarter rally at Houston, the numbers would be even bleaker.

The good news is Indy remains within striking distance of the AFC South lead thanks to four teams that have combined for one win.

But if the Colts can't find a solution, this season's goals could quickly become out of reach.

They host the high-octane Kansas City Chiefs (2-0) on Sunday and two-time defending AFC South champ Tennessee (0-2) in Week 4 before visiting Denver (1-1) on Thursday night in Week 5.

They'll likely need to score more than the 10 points they've averaged so far to win any of those three.

Reich has been here before.

He led the Buffalo Bills to the greatest playoff comeback in NFL history in January 1993 and the Maryland Terrapins to one of college football's greatest comebacks in November 1984.

He also steered Indy from a 1-5 start to the playoffs in 2018, nearly did it again last season when the Colts were 1-5 and helped the Philadelphia Eagles win a Super Bowl with a backup quarterback.

So Reich is not changing his philosophy.

“You can look at a really bad loss like this and you have to resist the temptation to overreact, to make overall changes,” he said. “It's not not about making things more complex, it’s not about making wholesale changes. You've got to do what you do. We just have to do it better."

Almost anything would be better than what Colts fans have watched through the first two weeks.

They acquired Ryan partly because they thought he would bring stability and leadership. They've had six straight season openers with a new quarterback.

Instead, Ryan has barely been able to get started. He's been sacked seven times and was under heavy duress on many more plays. The result: four interceptions and five fumbles. In Ryan's previous 14 seasons, he's only topped the six-fumble mark four times.

“I think there's frustration all around, but we're not going to let that get to us,” right tackle Braden Smith said. “It just takes one guy missing a block here or there or missed assignment. It's just getting everybody on the same track, working it together as one and we'll have some success.”

The problems also have shown up in the ground game even though Taylor has played well. He's averaging 5.38 yards per carry and ranks third in yards rushing (215).

Yet he only had nine carries as the Colts ran 48 offensive plays in last week's abysmal 24-0 loss at Jacksonville.

But the top concern is the offensive line.

Each has struggled at times, though, prompting calls from fans for lineup changes.

Reich, for now, is declining those requests and has focused his attention on something he considers more critical — just playing better overall football.