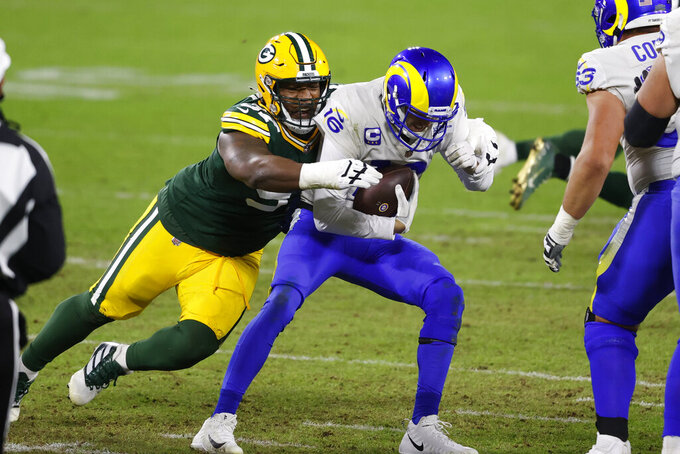 GREEN BAY, Wis. (AP) — The Green Bay Packers should get an immediate indication of whether their defense is as stingy as its preseason billing suggests.

“I think our defense, at least on paper, is as good as it’s ever been,” defensive lineman Dean Lowry said. “Paper doesn’t mean anything, though, and we’ve got to go out and prove it for 17 weeks and then go and do it in the playoffs.”

The chance to prove it starts Sunday at Minnesota.

The Packers romped 37-10 at home the last time these teams faced each other, but the Vikings played that game with Sean Mannion as their starting quarterback after placing Kirk Cousins on the reserve/COVID-19 list two days beforehand.

When Cousins has been available, the Vikings have moved the ball quite well against the Packers. The Vikings had scored at least 28 points in three straight matchups with the Packers before the Mannion game.

“They have given us some problems,” defensive tackle Kenny Clark said. “They have a lot of weapons. They have really good players over there. They present a lot of challenges for us.”

“We’ve kind of got a blueprint of what we think they’re going to come out and do,” outside linebacker Rashan Gary said. “But at the end of the day, once that ball is snapped, we’ve got to go play. It could be un-scouted looks. It could be looks we think we were going to get.”

Green Bay’s defense enters this season brimming with confidence after outperforming the Packers’ offense for much of training camp.

The Packers’ 2021 rankings don’t jump off the page — they tied for 13th in scoring defense and were ninth in total defense — but they closed the season by not allowing a single offensive touchdown in a 13-10 NFC divisional playoff loss to the San Francisco 49ers.

Green Bay then signed All-Pro linebacker De’Vondre Campbell and cornerback Rasul Douglas to new deals following their breakthrough seasons. They added two first-round picks by selecting linebacker Quay Walker and defensive lineman Devonte Wyatt, who both helped Georgia win a 2021 national title. They also get back star cornerback Jaire Alexander after he missed most of the 2021 season with a shoulder injury.

That has the Packers believing their defense could help give them a fourth straight NFC North title and the Super Bowl bid that has eluded this franchise since its 2010 championship season.

The mission starts in Minnesota as the Packers contend with a Vikings playmaking trio that has given Green Bay problems in the past.

Dalvin Cook was limited to 13 yards on nine carries in the 37-10 loss last season, but he led Minnesota to a 28-22 victory at Green Bay in 2020 by becoming the first Viking since Ahmad Rashad in 1979 to score four touchdowns in a game. Cook had 163 yards rushing and 63 yards receiving that day.

“Me personally, I think he’s probably the best back in the league,” Clark said. “He’s as talented as any running back I’ve ever played.”

Cousins threw for 341 yards and three touchdowns without an interception to lead the Vikings to a 34-31 triumph when the Packers visited Minnesota last year. Justin Jefferson had 10 catches for 169 yards and two touchdowns that day, though he’s failed to score in his other three career matchups with the Packers.

“When we give Dalvin the respect to stop the run, we’ve got to hold up in the back end,” defensive coordinator Joe Barry said. “That’s what makes an offense like this, when they have two elite weapons, so unique. Because very few times do you play an offense that has top-three players at a position that is a wideout and a back.

The Packers can’t wait to discover how well they meet this challenge.

“As far as a measuring stick, it’s definitely a big one for us, for this defense to go against those guys,” Clark said.