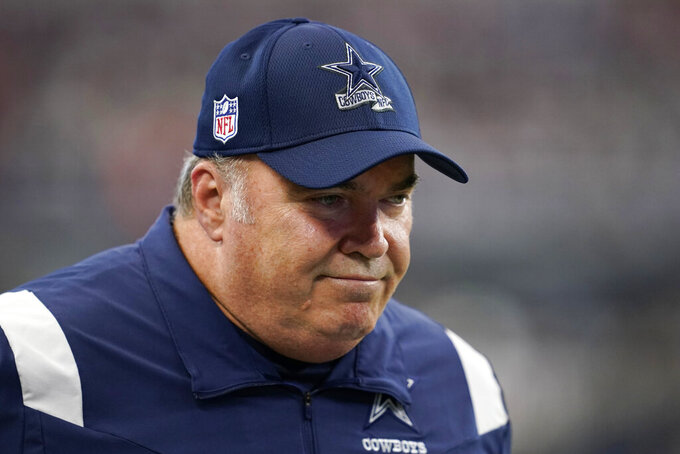 EAST RUTHERFORD, N.J. (AP) — The Dallas Cowboys and New York Giants are going to renew their NFC East rivalry on Monday night, —and this one might be an indication of whether the times are changing.

The Cowboys, the defending division champions, have owned the Giants the last five years. The teams have played 10 times and Dallas has won nine.

This season has gotten off to an interesting start, though. Dallas has split two games and saw quarterback Dak Prescott undergo thumb surgery after the season opener. How long the star quarterback will be sidelined is uncertain, but Cooper Rush will be running the offense against the surprising Giants.

New York, which won four games last year, is halfway to that total after knocking off Tennessee and Carolina in Brian Daboll's first two games as coach. Beating Dallas in a nationally televised game would be another step toward respectability after five straight losing seasons.

“This is a divisional opponent and the quickest way to get into the postseason is to win divisional games,” said receiver Sterling Shepard, the Giants' current longest tenured player. “They are always huge games no matter what start you have.”

McCarthy said he talked with his players about the last five years, but his focus was to remind them about the importance of winning in the division.

“This is an important game,” he said. “It’s a division game. It’s our first division game. It’s ‘Monday Night Football.’ They’re 2-0. You look at all of those things, at the end of the day, this is going to come down to us playing to our playstyle, play to our discipline and we feel like we’ll do what we need to do to win the game.”

Reigning NFL Defensive Rookie of the Year Micah Parsons leads the NFL with four sacks, two in each of the first two games.

Dallas' dynamic linebacker could join Kevin Greene (1998) and Mark Gastineau (1984) as the only players to start a season with three multi-sack games. He’s leading a Dallas defense that held the offenses of Tampa Bay's Tom Brady and Cincinnati's Joe Burrow to a touchdown apiece in the first two games. It’s the fewest TDs allowed by the Cowboys through two games since 1996.

“Micah wreaks havoc,” McCarthy said. “He’s definitely a focal point for every one of our opponents. You could see that last year.”

The combination of a healthy Saquon Barkley and an improved offensive line has been the constant in the Giants' offense. Barkley leads the league with 236 yards rushing and his 282 yards from scrimmage is fifth-best overall.

The one problem for the line has been pass protection. Daniel Jones has been sacked eight times, losing one fumble on one of those. However, he has done a good job of protecting the ball, throwing one interception while hitting 71% of his passes for three TDs.

Cowboys owner/general manager Jerry Jones and his son, executive vice president of personnel Stephen Jones, make frequent radio appearances during the week, and always get asked about the timeline for Prescott’s return.

Stephen Jones said definitely not this week. Both said maybe Week 4 at home against Washington.

The swelling after surgery wasn’t as bad as it could have been, which is why the Cowboys are talking a handful of weeks instead of as many as eight.

The bottom line is Rush will make multiple starts this year after filling in once last season when the star quarterback was out with a calf strain.

When Daboll hired Wink Martindale as his defensive coordinator, the word was the former Ravens' coordinator was going to bring a blitz-heavy package to the Giants.

McCarthy said Giants have not blitzed as much as one would have expected.

“His numbers aren’t real high right now, but his history, obviously, you have to always account into the history of the coordinator,” McCarthy said of Martindale.

Last week, Martindale threw a curve at the Panthers after top defensive lineman Leonard Williams hurt his knee in the third quarter. He went the rest of the game using mostly two linemen mixed with linebackers and defensive backs.

What he has for Dallas remains to be seen

Dallas receiver Michael Gallup could make his season debut coming off a torn ACL from January. McCarthy indicated Gallup might not be ready for a full load against the Giants, but situational roles is a possibility.

The Cowboys also are expecting a game-time decision for tight end Dalton Schultz, who sprained his right knee late against Cincinnati.