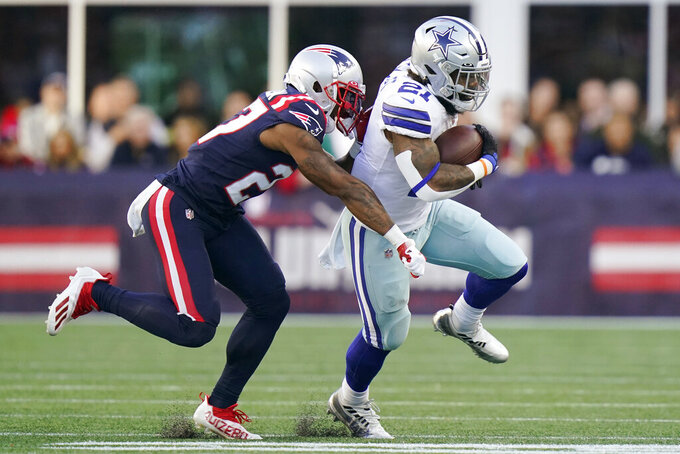 We’ve got quite a few games under our belts at this point, so touchdown dependencies are starting to level out, giving us a good idea of who can keep up their high-scoring ways. These are my best bets to score going into Week 8 of the NFL season.

Harris is starting to hit his stride in the New England offense, scoring four touchdowns over his past three games and going over 100 yards in his past two outings. He’ll face a Chargers team this week that stifles the pass but bends for the run, allowing the second-most rushing TDs in the league this season. With a 39.63% TD dependency, Harris is right in the sweet spot for being able to keep up his current scoring profile.

It’s a good thing the Jaguars had a bye last week, because James Robinson surely needed some rest from carrying the offense for four consecutive weeks. He’s gone over 70 yards a game and scored five TDs in that time, and perhaps only the bye would have kept him from doing it all over again in Week 7. There’s no such barrier in Week 8, as Robinson gets to go against a Seattle defense that has given up the second-most points to RBs this season and is our sixth-best matchup for RBs at Rosterwatch.com.

Elliott had scored one or more TDs in his past four games before getting somewhat stymied, in the scoring department at least, by the Patriots defense in Week 6. They allowed 119 yards but no score. Elliott has had a week off before he faces a Minnesota team that is tied for the fifth-most rushing TDs allowed (five) this season. He should keep his 36.51% TD dependency well intact.

Mixon has his best matchup of the season this week, as he’ll go against a Jets team that is the best matchup for opposing RBs in the NFL, having allowed 11 TDs to RBs this season. On a four-game TD tear, Mixon should have little trouble finding the end zone once again in Week 8.

Henderson isn’t your prototypical goal-line back, but he’s being used as one in Los Angeles nonetheless. In fact, he rarely leaves the field at all, as Henderson has the highest snap count rate (83.5%) of any RB in the league. So chances are good that Henderson gets all of the rushing opportunities to score against a Texans team that is our fifth-best matchup for opposing RBs.

Evans had a productive Week 7, three of his six catches were for touchdowns, with Antonio Brown and Rob Gronkowski both out. Gronk may return this week, no word yet on Brown, but Evans will remain a strong bet to score as the Saints haven’t allowed a TD to a tight end yet this season but have allowed five TDs to WRs.

Thielen got back on track in Week 6, going for 116 yards and a score, before the Week 7 bye. He’ll look to continue his recent upward trend against a Cowboys defense that doesn’t break, but still they’re our fourth-best WR matchup on the day. Cowboys CB Trevon Diggs will probably give Justin Jefferson most of his attention, so the 43.17% TD dependent Thielen should see a lot of action on the other side of the field.

Kansas City's offense struggled in Week 7 against the Titans as the Chiefs managed three points in the loss, so look for a return to form against the Giants this week, with Hill as a primary playmaker. There’s no Clyde Edwards-Helaire again this week, so Patrick Mahomes will lean on Hill along with TE Travis Kelce. Our sixth-best matchup for opposing WRs, the Giants could struggle keeping the 30.49% TD dependent (on a whopping 52 receptions) Hill, or any of the Chiefs playmakers, out of the end zone.

Lamb has ascended to the top of the Cowboys passing attack in his second year as a pro, racking up 149 yards and two TDs in his most recent outing against the Patriots. The premier WR in perhaps the NFL’s most dynamic offense, Lamb will face a middling Vikings defense in what is shaping up to be a high-flying matchup with plenty of scoring.

Jimmy Garoppolo is back under center for the 49ers and that’s a boon for the electrifying Samuel. Samuel has a double-digit target average when Jimmy G is playing. His opponent this week, the Bears, are middle of the road against WRs yardage-wise, but they’ve allowed the second-most (12) receiving TDs to WRs in the league this season.