Daniel Jones practices as Giants prepare for the Packers 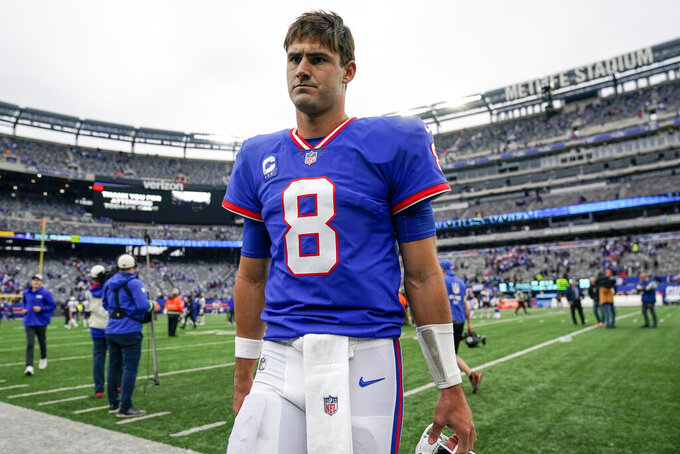 EAST RUTHERFORD, N.J. (AP) — Quarterback Daniel Jones' sprained left ankle has improved and he practiced on a limited basis Wednesday as the New York Giants started preparations for a game in London against the Green Bay Packers this weekend.

Coach Brian Daboll seemed encouraged his quarterback was responding to treatment. Jones said he felt good when he was on the field.

“Yeah, it felt good to get out there and then working with the trainers and, you know, I made a lot of progress last couple of days,” Jones said.

Daboll said Jones is a tough player who spent a lot of time working with the trainers. The team, which is leaving for London on Thursday night, will continue to evaluate his ankle on a daily basis. He would probably be a game-time decision.

“I'm confident in my ability to throw from a pocket, throw outside the pocket and make plays from both,” said Jones, whose legs play a big part in both his passing and running.

Backup quarterback Tyrod Taylor remained in the concussion protocol, Daboll said. Like Jones, Taylor was hurt in the second half of the Giants' 20-12 win over the Chicago Bears on Sunday.

Practice squad quarterback Davis Webb, who has never started an NFL game would be the Giants' third option. He has played in one game and taken a couple of handoffs and knees in a Buffalo Bills win.

The Giants did little with the quarterbacks in the portion of the practice that was open to reporters. Jones did take one snap and roll to his right. He moved very well, wearing a pair of high top red shoes inside the bubble.

“The dude’s a competitor,” Giants center Jon Feliciano said after the practice which was held in the team's practice building because of rain. “I don’t even see him limping. I made a crack at him when I saw him do a little drop-back and throw the ball: ‘Oh, you’re fine.'"

Jones said he wore the red shoes last year, adding they give his ankles a little more support.

Packers coach Matt LaFleur said he is getting his team ready to play the Giants (3-1), who have the best rushing offense in the league, averaging 192.5 yards.

“I’ve been in a similar situation on the other side of this where we didn’t know who our quarterback was going to be and sometimes it makes you get pretty creative, so I think it kind of leaves up everything in the open for what we could potentially be facing,” he said.

New York also placed cornerback Aaron Robinson on injured reserve with a knee issue. He started the first game, missed the next two because of appendicitis and then was hurt against the Bears in his return.

Receiver Sterling Shepard is waiting for the swelling to go down before he has surgery for a torn ACL. The 29-year-old said he plans to attempt a comeback next season, saying he wants to go out on his own terms.

Center Nick Gates, who broke his left leg early last season, was taken off the physically unable to perform list and returned to practice for the first time in more than a year.

Gates was hurt against Washington and had multiple surgeries. He was injured in his first start at left guard, a move made to help the team with Shane Lemieux out for the season.