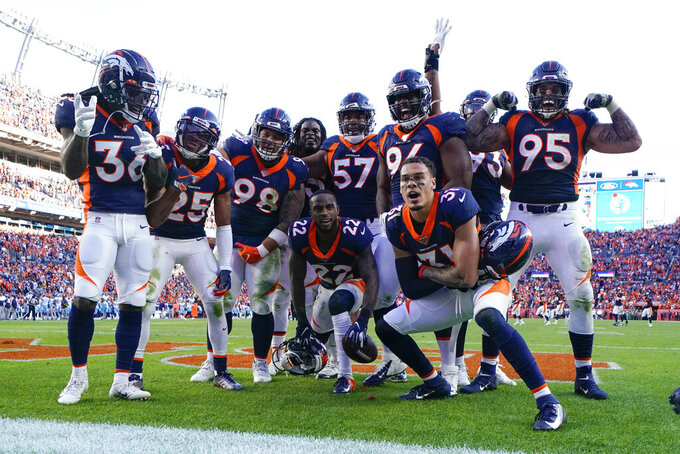 Denver Broncos defensive back Kareem Jackson (22) reacts with teammates after intercepting a pass during the second half of an NFL football game against the Tennessee Titans, Sunday, Oct. 13, 2019, in Denver. (AP Photo/Jack Dempsey)

DENVER (AP) — On a day the Denver Broncos honored their past, their current roster put on a good, old-fashioned defensive destruction of the Tennessee Titans.

The Broncos (2-4) blasted their way to seven sacks and three interceptions while sending Marcus Mariota to the bench and then stifling his backup, Ryan Tannehill, too, in a 16-0 win, their first shutout in two years.

They allowed just 204 yards on a day they honored recent Hall of Fame inductee Champ Bailey and other members of their all-time top 100 team including Rich "Tombstone" Jackson, Dennis Smith and Karl Mecklenburg.

"I had it in my mind to put on a show for those guys," said cornerback Chris Harris Jr., whose interception just before halftime snapped Mariota's streak of 206 passes without being picked off. "Especially Champ, I told him I'd give him my football from my 20th pick."

This marked the first time Denver had seven sacks and three interceptions in a game since Sept. 16, 1984. It also happened three times in the 1970s and twice in the 1960s.

Mariota was sacked three times and he was benched after Justin Simmons's interception early in the third quarter led to the game's only touchdown , a 2-yard run by Phillip Lindsay that made it 13-0.

"I was inaccurate today, didn't give our guys a chance to make plays," said Mariota, who was just 7-for-18 for 63 yards and a paltry passer rating of 9.5.

"We're just trying to find a way to move the football, score some points," Titans coach Mike Vrabel said. "Our defense was forcing them to kick field goals. We gave up the touchdown, but I felt like we were in the game and we needed to find a way to score."

Tannehill was sacked four times and picked off by Kareem Jackson on Tennessee's final drive, which reached the Denver 5-yard line before two offensive penalties and a sack pushed the Titans (2-4) back to the 30-yard line.

"We were very pumped ," Harris said of Jackson's interception with 1:30 remaining, which allowed Joe Flacco to kneel out the clock. "We wanted a shutout."

"It's a lot of fun when you dominate, especially when you start the way we did," Jackson said of Denver's slow September in which they went three games without a sack and four without a takeaway. "We felt like we were close. We felt like we had to make one or two more plays and things would start to swing in our direction."

Tannehill was 13 of 16 for 144 yards but much of that came with the Broncos protecting the end zone late.

The Broncos, who haven't allowed a touchdown in nine quarters, host Kansas City (4-2) on Thursday night with the chance to get back into the AFC West race after starting the Vic Fangio era with four frustrating losses.

The Broncos' winning streak coincides with the insertion of ILB Alexander Johnson into the starting lineup. Last week, he made his first start since Nov. 15, 2004, for Tennessee vs. Kentucky, and recorded nine tackles and an end zone interception against the Chargers. On Sunday, he had a team-leading nine tackles, two QB hits, 1½ sacks and a tackle for loss.

"He's been killing it since he stepped in, and I'm happy for him," said Von Miller, who got half a sack.

"It's great," Miller said. "We just kept chipping away. You hit the rock 100 times and on the 101st blow it cracks for us. It's good to have so many guys have so much success today. We had three picks. Turnovers have been evading us all season long."

Both Denver and Tennessee were 2 of 14 on third downs, leading to 17 punts.

The first half featured more flags (10) and punts (11) than points (six), which came on two field goals by Brandon McManus, whose 53-yarder ended a skid in which he'd missed seven straight from beyond 50 yards.

At halftime, Pro Football Hall of Fame president David Baker presented Hall of Fame rings to Bailey and the family of late owner Pat Bowlen. Also, Bailey was inducted as the 33rd member of the team's Ring of Fame.

Broncos wide receiver Emmanuel Sanders sat out the second half with a knee injury.