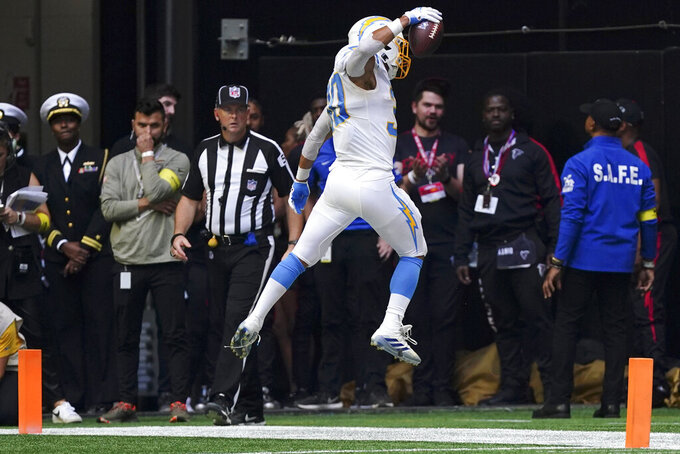 Los Angeles Chargers running back Austin Ekeler celebrates after catching a 1-yard touchdown pass during the first half of an NFL football game against the Atlanta Falcons, Sunday, Nov. 6, 2022, in Atlanta. (AP Photo/John Bazemore)

Cameron Dicker kicked a 37-yard game-ending field goal three days after being signed as a free agent, lifting the Chargers over the Atlanta Falcons 20-17 on Sunday.

Dicker also made a 31-yarder with 5:27 left, tying the game at 17. The rookie from Texas was signed to the practice squad Thursday and activated Sunday in place of injured Dustin Hopkins. This was only Dicker's second NFL game — he also made a late, go-ahead kick for the Philadelphia Eagles as an injury replacement in Week 5.

Taylor Bertolet played the hero's role with four field goals filling in for Hopkins in a 30-28 win at Cleveland on Oct. 9. Bertolet was placed on injured reserve with a quad injury Wednesday. Dicker won a job with an audition a day later.

Quarterback Justin Herbert said Dicker won the players' confidence by showing “how special a player he was. He was perfect in practice.”

When pressed on how he could have such confidence in a kicker who had been with the team for just a few days, Herbert said, “He showed that confidence and it rubbed off on us.”

Teammates lifted Dicker on their shoulders following the game-winner.

“My teammates tell me it’s OK, but I’m probably the hardest on myself, so I should’ve held onto the ball," Graham said. “Probably should’ve fell on it. Probably should’ve gotten out of bounds. All of the above, so now I have to move on from here.”

Herbert's 22-yard pass to Joshua Palmer set up Dicker's kick as time expired. Staley said he would have been confident in Dicker anywhere inside the 35-yard line.

The loss prevented the Falcons (4-5), who began the day in first place in the NFC South, from moving above .500 for the first time since 2017.

Dicker's 31-yarder came after an apparent go-ahead 37-yard touchdown reception by Ekeler was called back following a review. Officials on the field ruled Ekeler was not down when tackled by Isaiah Oliver but instead said he rolled over Oliver without touching the ground. The review showed Ekeler's left elbow touched the turf.

Atlanta's Cordarrelle Patterson ran over Chargers linebacker Drue Tranquill on a 3-yard touchdown run that gave Atlanta a 17-14 lead in the third quarter. Patterson had a 1-yard scoring run on the Falcons' opening drive.

With the Chargers leading 14-10, Atlanta was driving for a possible go-ahead touchdown on its first possession of the third quarter when Marcus Mariota completed a pass to rookie Drake London. Linebacker Khalil Mack took the ball from London at the Los Angeles 7 and returned the fumble 43 yards.

With Keenan Allen (hamstring) and Mike Williams (on IR with an ankle injury) missing the game, Palmer had eight catches for 106 yards.

“He’s just an explosive guy,” Allgeier said of Patterson. “It was good to have him back.”

The Falcons had four players, including Mariota, run for at least 250 yards over the first four games, setting an NFL record. The depth at running back allowed the Falcons to avoid overworking Patterson in his first game off IR.

Allgeier had a 44-yard run on the opening drive for Atlanta’s longest run of the season.

Atlanta led 10-0 in the first quarter, when the Chargers were held without a first down. It marked the fourth consecutive game Los Angeles trailed by at least 10 points. The Chargers are 3-1 in those games, also beating Cleveland and Denver and losing to Seattle.

Falcons: TE Feleipe Franks was ruled out with a calf injury at the start of the second half. ... RG Chris Lindstrom was accompanied to the locker room with a knee injury in the third quarter. Colby Gossett replaced Lindstrom.

Chargers: Play at San Francisco next Sunday in the first meeting between the teams since 2018, when the Chargers won 29-27 for their fifth straight win in the series.

Falcons: Face Carolina for the second time in three week when they visit the Panthers on Thursday night. Atlanta took a 37-34 overtime home win over Carolina on Oct. 30.