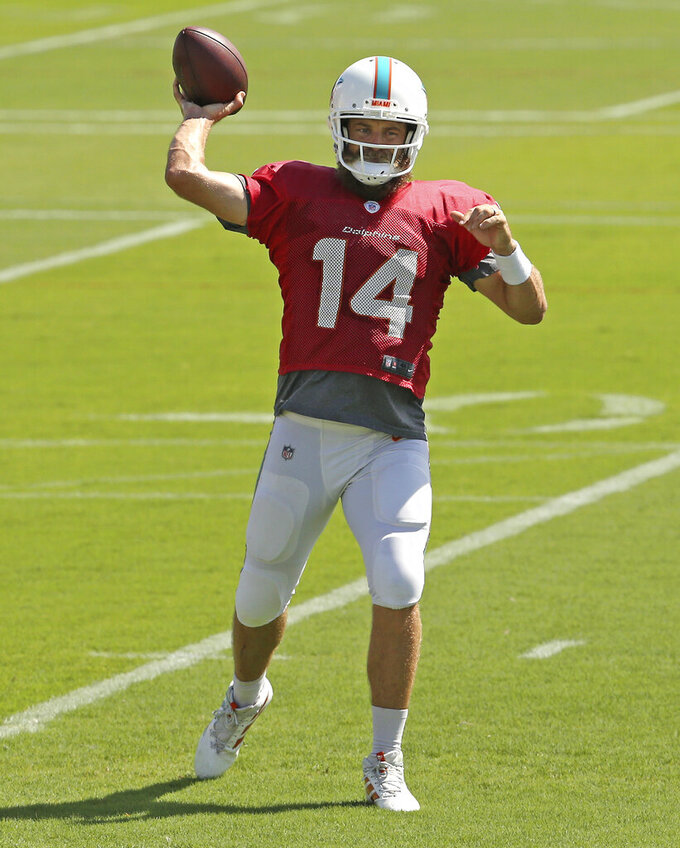 Miami Dolphins quarterback Ryan Fitzpatrick run drills during practice at the Baptist Health Training Facility at Nova Southeastern University on Wednesday, October 16, 2018, in Davie in preparation for their game against the Buffalo Bills on Sunday at New Era Field in New York.(David Santiago/Miami Herald via AP)

Forty-seven years since the Miami Dolphins had the only undefeated season in NFL history, the team is heading toward an ignominious record.

The 2008 Lions and 2017 Browns are the only teams to finish 0-16. The Dolphins have six games remaining against teams that are currently 2-4 or worse.

The offense is getting a boost, however, because veteran Ryan Fitzpatrick was named the starting quarterback on Wednesday. Fitzpatrick, who started the first two games, replaced Josh Rosen last week and nearly led the Dolphins to a win over Washington.

SACK MAN: Minnesota's Danielle Hunter has 46 sacks, the most ever for a player under age 25. Hunter plays two more games before his 25th birthday and is tied for fourth in the league this season with six sacks.

SACK MEN: Tampa's Shaquil Barrett and Cleveland's Myles Garrett each have nine sacks and are on target for 24. That would break Michael Strahan's single-season record of 22 ½, set in 2001.

COMPETITIVE GAMES: More games (51) have been decided by seven points or fewer through six weeks than any other year at that point. This season also is tied for the most one-point games through Week 6 with nine.

RUSS ON A ROLE: Seattle's Russell Wilson is the fourth quarterback to post a passer rating of at least 100 in his team's first six games. Aaron Rodgers did it in Green Bay's first 12 in 2011. Wilson has thrown at least two TD passes in 67 games through eight seasons. Peyton Manning did it 74 times and Dan Marino 72.