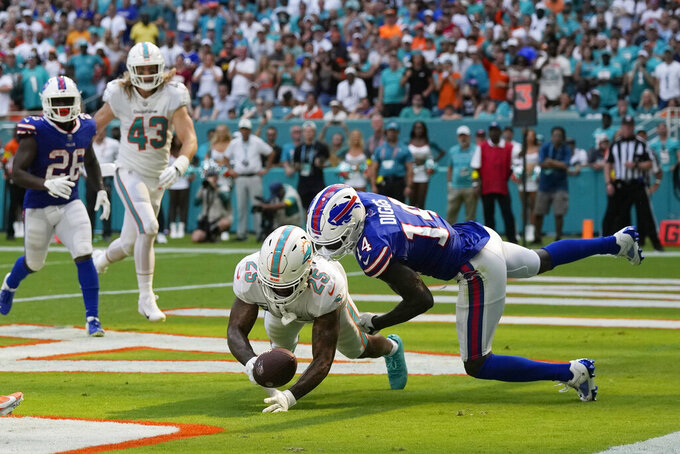 MIAMI GARDENS, Fla. (AP) — Tua Tagovailoa and the Miami Dolphins' offense were barely on the field Sunday. But Miami’s defense kept Josh Allen and the Buffalo Bills from putting together another explosive win.

Miami held the Bills to 19 points, their fewest since Week 13 last season, and got pivotal stops down the stretch to mount a comeback victory for the second straight week and remain undefeated.

A win over the Bills had eluded Miami for the previous seven matchups. But the Dolphins are now 3-0 for the first time since 2018 and are one of only three undefeated teams in the NFL.

“It took a lot of grit. That’s what those southern grandmothers make on Sundays: grits,” said Dolphins defensive tackle Christian Wilkins. “It was gritty. It took a lot. It showed the character of our team. But our goals are bigger than going 3-0 and beating the Bills. This is just a stepping stone to where we want to go.”

Dolphins coach Mike McDaniel said the team’s goals can change as circumstances change and as they continue to build success. They know they have a team they’re confident can take them far, but they don’t want to get too far ahead of themselves.

“If you are talking about goals that happen 15 weeks from now, you’re just going to get hit in the mouth because every single week in the National Football League everyone is giving you their best shot,” McDaniel said. “So I think now we can talk about not sneaking up on people, but realistically whether we’re 0-3 or 3-0, we’re playing the Cincinnati Bengals on Thursday night.”

The defense. Miami’s talent on defense was clear heading into the season, and they showed why Sunday. The Dolphins survived two late drives from Allen and the Bills’ offense and withstood Buffalo’s lengthy drives throughout the game. The Dolphins missed several chances to intercept Allen when he drove the Bills down the field with a chance at a go-ahead touchdown. But they made up for it with a fourth-and-goal stop, and a stop on Buffalo’s next drive to seal the win.

The pass defense. Although the Dolphins made two huge stops to close the game, they gave up several big plays early during Buffalo’s scoring drives. And it was the second straight week the defense gave up chunk plays and over 300 passing yards. Last week, Lamar Jackson threw for 318 yards and had a 75-yard touchdown pass. Allen threw for 400 yards and opened the game with a 28-yard pass to Stefon Diggs.

Melvin Ingram. The veteran linebacker who was signed in the offseason has played a key role through the first three games. Ingram had two sacks, a forced fumble and a fumble recovery against the Bills. On the last play of the game, Ingram missed out on a sack but tackled Buffalo receiver Isaiah McKenzie to keep him in bounds, leaving the Bills scrambling to spike the ball but with no time left.

Never mind what the Dolphins' special teams unit did for the first 58 minutes of the game. The prominent memory will be punter Thomas Morstead and “butt punt-gate.”

Luckily for Morstead, the safety that resulted from his blooper punt in which he kicked the ball right into Trent Sherfield’s rear end didn’t cost the Dolphins the game. But it was the second straight week the Dolphins' special teams unit had a head-scratching play after giving up a kickoff return touchdown against the Ravens in Week 2.

Tagovailoa left in the first half with what was originally reported as a head injury. He returned to start the third quarter and later said it was his back. ... T Greg Little injured his finger in the third quarter. ... McDaniel said there’s other players dealing with injuries from Sunday’s “hard fought game” but didn’t clarify who.

Apple’s Bengals, of course, defeated Hill and his former team, the Kansas City Chiefs, in the playoffs last year, ending their Super Bowl hopes. Hill’s chance for revenge will be soon, as the Dolphins face the Bengals (1-2) on Thursday night.