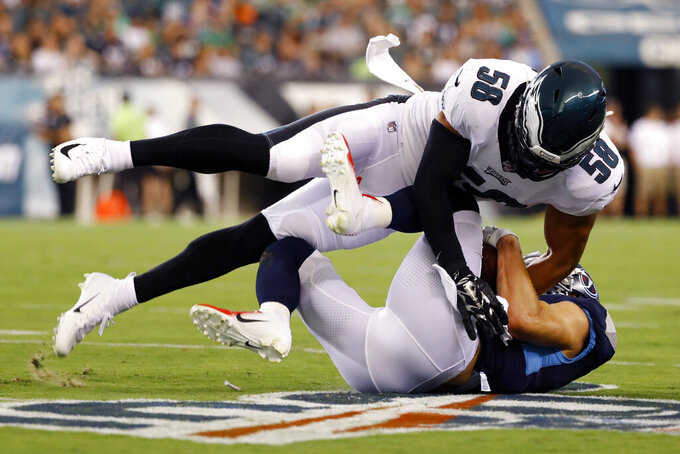 Nate Sudfeld broke his left wrist on a late hit in the second quarter of Philadelphia's 27-10 loss to the Tennessee Titans on Thursday night. Sudfeld is scheduled for surgery Friday morning, but Eagles coach Doug Pederson said the injury is not season ending and the team doesn't plan to add another quarterback.

"After surgery, I'll have a better update," Pederson. "Right now we're comfortable with (backups) we have."

"It was a lot of fun to compete against another team," Tannehill said. "We've been working hard since the spring and to have an opportunity to play for real was a lot of fun."

Sudfeld fell backward after a personal foul by Isaiah Mack and immediately went to the sideline. He was wearing an air cast on the cart ride to the locker room.

Sudfeld threw a 75-yard touchdown pass to Marken Michel and finished 10 of 18 for 177 yards. He's replacing Nick Foles, the 2018 Super Bowl MVP who signed a four-year, $88 million contract with Jacksonville in free agency.

Cody Kessler, 2-10 as a starter in three seasons with the Browns and Jaguars, replaced Sudfeld and took a late hit from Nigel Harris on his first play. He was 3 of 6 for 12 yards. Rookie Clayton Thorson was 2 of 9 and threw an interception.

"I've known Nate for a while so it's tough to see that, but it's part of it," Kessler said. "I'm going to be ready to go and step in there."

"It was awesome to get out there," Woodside said. "I felt comfortable, a little nerves at first and settled down after that."

Tannehill is adjusting to a backup role for the first time in his eight-year career. He started every game he was healthy to play — a total of 88 — with the Dolphins and didn't miss a game from 2012-15.

Tannehill had a 1-yard TD pass to MyCole Pruitt and a 23-yarder to Anthony Firkser. Woodside hit Cody Hollister on a 25-yard score and Tanner McEvoy on a 17-yard scoring strike.

Eagles first-round pick Andre Dillard started at left tackle with Jason Peters resting along with others. Running back Miles Sanders, the second-round pick, carried only three times for 3 yards.

"It was crazy," Sanders said. "It's everything I've been dreaming about. With a place like this, the fan base is crazy. Coming from Penn State, I felt that same vibe."

Titans new offensive coordinator Arthur Smith got his first chance to call plays in a game at any level. He was planning to sit upstairs in the coach's box but ended up on the sideline because of issues with headsets. Smith was promoted from tight ends coach to coordinator when Matt LaFleur took the head coaching job with Green Bay.

Running back Jordan Howard and defensive tackle Malik Jackson were the only projected starters to play for the Eagles along with Dallas Goedert, who will see plenty of action as the second tight end.

Eagles kicker Jake Elliott nailed a 53-yard field goal but hit the right upright on a 40-yarder on the final play of the first half.

Eagles: at Jacksonville next Thursday night.