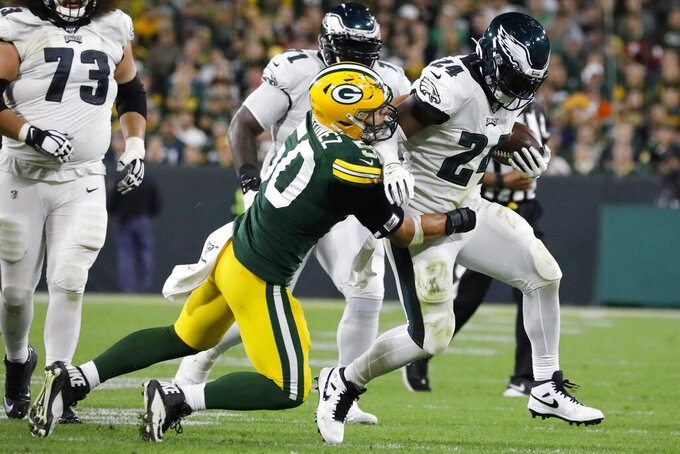 Philadelphia Eagles running back Jordan Howard runs after making a catch and breaks the tackle of Green Bay Packers inside linebacker Blake Martinez during the second half of an NFL football game Thursday, Sept. 26, 2019, in Green Bay, Wis. (AP Photo/Jeffrey Phelps)

PHILADELPHIA (AP) — Desperate for a win on the road in a short week with an injury-depleted roster, the Philadelphia Eagles turned to power football.

The Eagles (2-2) had 176 yards rushing in a 34-27 comeback win over the Green Bay Packers at Lambeau Field on Thursday night. The victory snapped a two-game losing streak and helped the team avoid potentially falling three games behind Dallas (3-0) in the NFC East.

Jordan Howard ran for 87 yards and two touchdowns, rookie Miles Sanders rushed for 72 yards, and the offensive line opened gaping holes. Carson Wentz only threw for 160 yards but he tossed three TD passes and posted a season-high passer rating of 113.2.

"I believe it's a little bit of recipe for our offense not having DeSean (Jackson) out there to have that deeper threat down the field, you kind of rely on the run game a little bit," coach Doug Pederson said Friday. "Even with DeSean, I think that's how we can play and utilize that run game and it does open up some things for us."

Jackson missed another game with an abdomen injury, but Alshon Jeffery returned after being sidelined by a calf strain. Jeffery had three catches for 38 yards and one TD.

While the offense had its best effort thus far, the defense again struggled against the pass. But the Eagles stopped Aaron Rodgers twice inside the 5, including four straight incompletions from the 1 and an interception in the end zone in the final minute.

The run game stepped up in a big way. Howard ran hard, fought through tacklers and pounded the defense. Sanders cut and slashed his way through big holes and held onto the ball after fumbling twice on the same drive in a loss to Detroit last Sunday.

Rodgers threw for 422 yards against a struggling secondary that's now missing four of its top five cornerbacks. Starter Ronald Darby was out with a hamstring injury and fellow starter Jalen Mills is on the PUP list. Sidney Jones left the game after injuring his hamstring and Avonte Maddox was carried off the field on a stretcher. Craig James, waived on Sept. 17 and signed off the practice squad on Tuesday, deflected the pass that was picked by Nigel Bradham to seal the win.

Howard not only ran hard but caught three passes for 28 yards and one TD. The fourth-year pro leads the team in yards rushing (186) and average yards per carry (4.7).

Jones sat out almost his entire rookie year with a pre-draft injury, missed seven games last season and is now out again. The 2017 second-round pick can't seem to stay healthy and has struggled when he's played.

Maddox was diagnosed with a concussion and a neck injury but flew home with the team after being released from a hospital. He was carried off the field on a stretcher in the fourth quarter following a collision. He needs further evaluation.

0 — Zero sacks. Wentz was sacked six times and endured several hits in the previous two games, but the offensive line stepped up against a tough defensive front.

The Eagles have a few extra days off before they host the New York Jets (0-3) on Oct. 6. The Jets are 0-10 against Philadelphia.