Early deficits, lots of throws add up to wins for Chargers 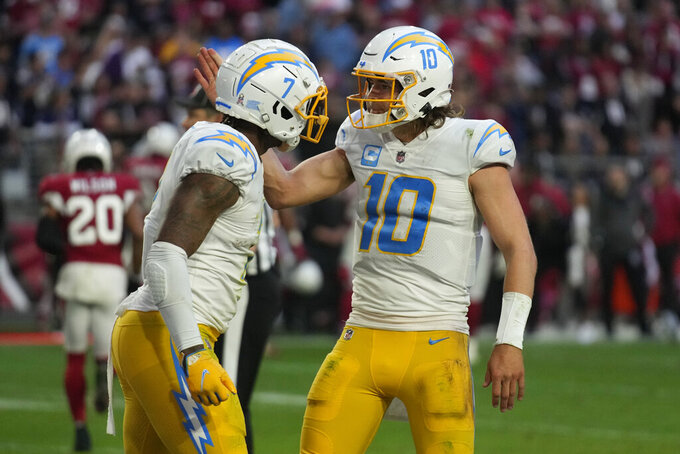 Most teams lose when attempting 40 or more passes in a game that doesn't go to overtime. And teams that face double-digit deficits in the first half don't usually overcome them.

Then there are Justin Herbert and the Los Angeles Chargers.

The Chargers rallied from a 10-point, second-quarter deficit to beat the Arizona Cardinals 25-24 on Sunday and remain in contention for an AFC playoff spot at 6-5.

They were able to win thanks to Herbert, who completed 35 of 47 passes for 274 yards, three touchdowns and a 109.7 passer rating. It was the sixth time this season Herbert had 40 attempts or more in a game, which is second in the league behind Tom Brady's eight.

Herbert has not had his full arsenal of receivers this season, but has managed to adjust. Keenan Allen has played the last two games after missing most of the season with a strained hamstring, but with Mike Williams continuing to deal with an ankle injury, Herbert has not been able to go downfield as much as he did during his first two seasons.

Against the Cardinals, 35 of Herbert's 47 attempts were within 10 yards of the line of scrimmage. Only two were thrown 20 yards or more.

"I thought that our team did enough yesterday, offensively, to win — certainly in the passing game. For Justin to have 47 attempts and no turnovers yesterday, fumbles or interceptions, those are the statistics that really matter in winning and losing. I think that he is doing a great job of that."

Staley also went back to the aggressive style that defined him last year by going for the 2-point conversion and the win instead of playing for overtime. It is the second time in the past five seasons the Chargers have won on the road when going for 2 late.

Los Angeles also seems more comfortable playing from behind early than with a lead. Its last four wins have come after it trailed by double digits. Meantime, the Chargers blew leads in back-to-back losses to San Francisco and Kansas City.

Sunday's win kept the Chargers one game out of a wild-card spot. With most of the teams in front of them winning, a two-game deficit with six to play could have been difficult to make up.

“That’s part of football. Every week that you’re going into, you’re going to try and win that game. There’s a lot of football to be played and the guys are excited to be a part of it," Herbert said.

Austin Ekeler as a receiver. He had 11 catches against the Cardinals and has 80 this season, the most by an NFL running back through 11 games. He has three games with double-digit receptions and is tied for the AFC lead with 12 scrimmage touchdowns.

Run defense. The Chargers are the first team since San Francisco in 2016 to allow at least 150 yards rushing in five straight games during the same season. Arizona had 181 yards on Sunday. James Conner finished with 25 carries for 120 yards, the sixth running back to reach 100 yards against the Bolts.

DeAndre Carter. The fifth-year receiver set career highs with seven receptions for 73 yards, including a 33-yard TD in the second quarter. Carter also had a 20-yard punt return that set up the Chargers' go-ahead score. He has 19 catches for 223 yards and two touchdowns in the past four games.

Khalil Mack. After having six sacks in his first six games with the Chargers, Mack has one in the last five, along with four missed tackles.

Center Corey Linsley is in the concussion protocol. Offensive tackle Trey Pipkins aggravated the MCL injury to his right knee and is day to day. Staley did say whether Williams (ankle) would be able to practice this week.

10 — Comeback wins in the fourth quarter or overtime by Herbert, the second most for a quarterback in the first three years of his career. The Raiders' Derek Carr had 12 from 2014-16.

The Chargers conclude a stretch of four road games in five weeks against Las Vegas. The Raiders have a two-game winning streak after Sunday's 40-34 overtime victory at Seattle in which Josh Jacobs had 303 scrimmage yards, including 229 rushing.