With Emmanuel Sanders gone, could Chris Harris Jr. be next? 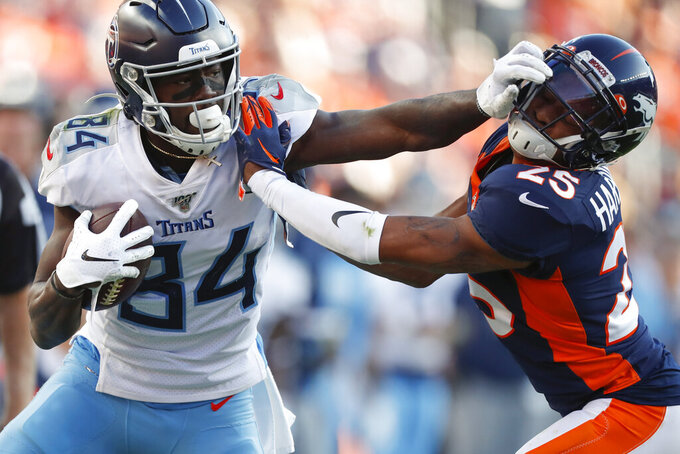 That's why the Denver Broncos standout cornerback swats away all the trade rumors he's hearing. At 2-5, the Broncos are already juggling the roster. They sent receiver Emmanuel Sanders to the San Francisco 49ers for two 2020 draft picks on Tuesday.

Harris very well could be next. The trade deadline is Oct. 29.

He's trying to tune out the noise and focus on his assignment this weekend, which is to cover Indianapolis receiver T.Y. Hilton.

"The season is not lost yet. I'm not throwing the season into the dump yet," Harris said Tuesday about two hours before Sanders was traded. "I have to have my mind clear, my mind right and be ready to go."

It's easy to see why Harris would be high on a team's wish list — a four-time Pro Bowler whose contract expires at the end of the season.

Broncos boss John Elway maintained no one has recently reached out to him with offers for Harris. Asked if he anticipates any more deals, Elway responded: "Possibly. Don't know yet. We'll see how it goes."

Harris pays attention to social media and sees the swirling rumors. His friends mention it to him, too. But Harris said he hasn't had a heart-to-heart with Elway. Nor has he asked for an audience with him, either.

"It's my job to play football, take on the top receiver each week," said Harris, an undrafted free agent in 2011 out of the University of Kansas. "That's my job. Nothing has changed. Obviously, nobody's come to me about anything. I'm just playing football every week. Taking it one week at a time.

"Of course, there are rumors and everything going out there. We have to be focused on the Colts and the season is not lost yet. I'm not throwing the season into the dump yet."

Harris is all that remains of the "No Fly Zone," a nickname given to the defensive backfield that consisted of Aqib Talib, Bradley Roby, Darian Stewart, T.J. Ward and Harris. That smothering unit helped the Broncos to a Super Bowl title following the 2015 season.

The 30-year-old Harris thought this year's secondary could be version 2.0 of the "No Fly Zone." But injuries have disrupted any sort of chemistry the team might have been building. Cornerback Bryce Callahan has been sidelined since re-injuring his surgically repaired foot in a July practice. Defensive back Kareem Jackson also has missed a game against Jacksonville with a hamstring injury.

"We don't have set positions really," said Harris, who was the first undrafted cornerback to make multiple Pro Bowls with his original team since Everson Walls did so with Dallas in the 1980s. "We've dealt with a lot of injuries, dealt with guys playing different spots every week. ... It's week-to-week with us in the secondary."

Until he hears otherwise, Harris will be lining up opposite an opponents' top target. Harris was responsible for the speedy Tyreek Hill in 30-6 loss to Kansas City last Thursday.

This weekend, it's Hilton. They've been on the same field five times in the regular season and once in the playoffs since being in the league.

Hilton has Jacoby Brissett throwing to him these days, and not the retired Andrew Luck.

"I would say (covering Hilton was) a lot harder when he had Andrew Luck," Harris said. "But Brissett is playing good football and it's going to be a challenge. ... I know I have a lot of pressure on me every week. I try to do whatever I can to give our team a chance to win."