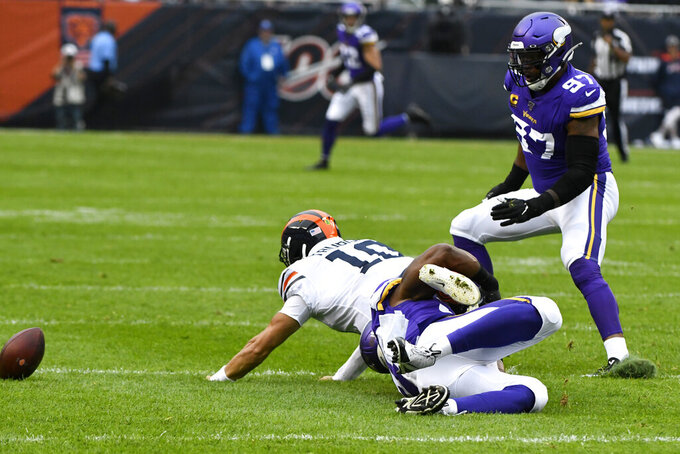 Chicago Bears quarterback Mitchell Trubisky (10) is injured as he fumbles and is pulled down by Minnesota Vikings defensive end Danielle Hunter and Vikings defensive end Everson Griffen (97) watches during the half of an NFL football game Sunday, Sept. 29, 2019, in Chicago. (AP Photo/Matt Marton)

EAGAN, Minn. (AP) — Everson Griffen burst from his three-point stance and appeared ready to try and beat New York Giants left tackle Nate Solder with speed to the outside.

Solder shuffled to get in position before Griffen used the tackle's momentum against him to get him off-balance. In one move, Griffen spun and had a wide-open lane to New York rookie quarterback Daniel Jones for a sack.

The Vikings are used to similar plays from Griffen, their three-time Pro Bowl defensive end. But a year earlier, as Griffen dealt with a mental health concern, no one knew if the team's energetic leader would ever be the same.

Griffen has returned to form on the field in 2019 and he's speaking openly about his continued work to deal with his mental health.

"It's OK to see help," Griffen said. "It's OK to go talk to people. It's OK to reach out. It's OK to have some problems in your life. And it's all about staying consistent with your plan and working your plan day in and day out."

Griffen's plan has him back as a vital member of Minnesota's defense. Griffen, who is seventh in Vikings' history with 69½ sacks, has three in five games this season. His takedown of Jones on Sunday was one of four sacks in Minnesota's 28-10 victory.

"First and foremost is his leadership, and not just with the D-line, just with the whole defense and that echoes to the whole team," said defensive end Stephen Weatherly, who filled in for Griffen last year. "He is a team captain for a reason. He is the Energizer ... He is the juice that we use. For him to be back, and also leading by his words but also by his example, it's just setting the tone for the whole team."

In September of last season, Griffen was involved in erratic behavior.

According to police at the time, Griffen had made comments about people trying to kill him. He had an incident at a local hotel before later showing up at teammate Trae Waynes' house without a shirt. He was eventually transported by ambulance to an area hospital, but jumped out of the ambulance at one point before police talked him back in.

Griffen was never arrested or suspected of committing any crimes, but he underwent a mental health evaluation. He was away from the team as he dealt with his health, a move supported by the Vikings, and ended up missing five games.

"So, it was disappointing for everybody that that happened to him, but we wanted to make sure that we stuck by him, gave him as much support and help as we possibly could, and he did all the work."

Griffen appreciated the support from the team. He returned later in the season and finished with 5½ sacks in 11 games.

The 31-year-old was possibly going to be released in March before his 2019 contract of $10.9 million was set to be guaranteed. But he agreed to a restructured four-year, $58 million contract minutes before the deadline, taking a pay cut to stay with the team that drafted him in the third round in 2010.

His play on the field in 2019 has shown his dedication, and Minnesota's, has paid off.

Griffen, who is ninth in the NFL with 52 sacks since becoming a full-time starter in 2014, could be a candidate for the league's comeback player of the year. Zimmer said Griffen's play reminds him of the end's Pro Bowl years.

"I feel good," Griffen said this week. "I just take it one day at a time, honestly. One day at a time, you know, and take care of my body. Make sure I'm doing everything to recover and be able to play at a high level. I'm playing good football. I could always play better."