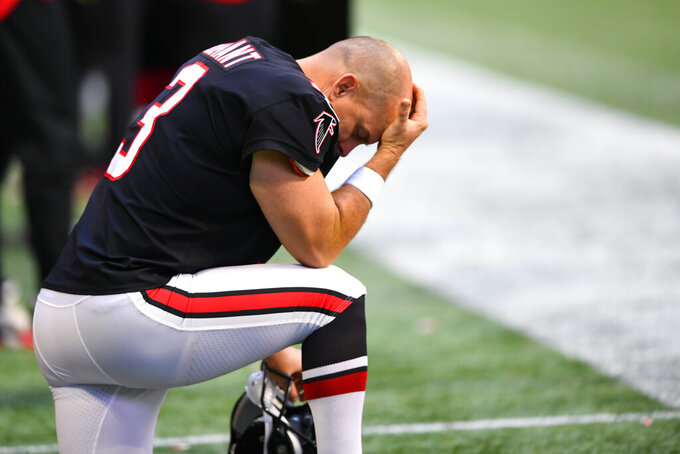 Atlanta Falcons kicker Matt Bryant (3) kneels on the sidelines during the second half of an NFL football game against the Seattle Seahawks, Sunday, Oct. 27, 2019, in Atlanta. The Seattle Seahawks won 27-20. AP Photo/John Amis)

FLOWERY BRANCH, Ga. (AP) — The Atlanta Falcons released kicker Matt Bryant on Tuesday, cutting ties with the leading scorer in franchise history for the second time in less than a year.

The Falcons brought in Younghoe Koo as Bryant's replacement.

Bryant was released after missing five of 14 field goal attempts this season, as well as a late extra point that was the difference in a 34-33 loss at Arizona.

Mired in a six-game losing streak, the Falcons (1-7) decided to make a change after Bryant missed two more field goals in a 27-20 setback to Seattle this past Sunday.

Bryant signed with the Falcons in 2009 and was one of the team's most reliable players over the next decade. He was released in a cost-cutting move after last season, but was brought back just before the opening game when the Falcons couldn't find a suitable replacement.

But Bryant wasn't the same after missing the entire preseason. His 64.3 percent success rate this year is the lowest of his 18-year career, which also includes stints with Tampa Bay, the New York Giants, Indianapolis and Miami.

The Falcons had intended to go with Giorgio Tavecchio this season. He was younger, cheaper and did a good job filling in when Bryant missed three games with an injury in 2018.

But Tavecchio struggled badly during the preseason, prompting the Falcons to bring in Blair Walsh for a tryout before the final exhibition game. Finally, the team worked out a deal to re-sign Bryant, who conceded to being angry at the way he was treated by the Falcons after such a stellar career.

"I would be lying to say I wasn't upset," Bryant said shortly after returning to the Falcons. "But that's in the past. We're here right now. I'm going to give it all I have to help this team win."

It didn't work out. With Bryant unable to recapture his previous form, the Falcons brought in a couple of kickers for a tryout on Monday. Koo won the job, returning to the NFL after a four-game stint with the Los Angeles Chargers in 2017.

Koo signed in January with the Atlanta Legends of the Alliance of American Football, scoring the first points in the league's short-lived history. He made all 14 of his field-goal attempts before the league folded with two weeks left in the regular season. He was most recently a member of New England's practice squad.