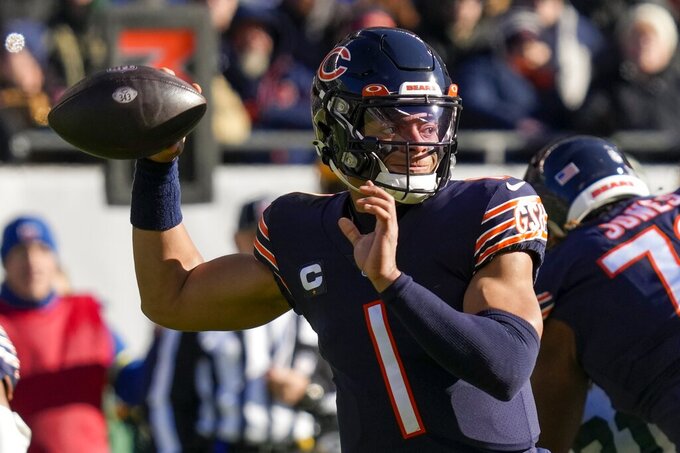 CHICAGO (AP) — A shoulder separation suffered two weeks ago failed to prevent Chicago Bears quarterback Justin Fields from running like he has all season.

He also delivered a season high in yards passing on Sunday.

What he couldn’t do was end a streak of poor finishes by Chicago and pull out a win against the Green Bay Packers. The Bears lost 28-19.

“I feel all right,” Fields said. “The shoulder held up pretty good.”

Fields ran for 71 yards on six attempts. He also completed 20 of 25 passes for 254 yards, but was intercepted on the Bears' final two possessions.

Fields felt the injured left shoulder was only aggravated on one pass play, when he was hit from behind early. He wore extra padding on it for protection and did not take any painkillers.

“I think this was one of my best games passing-wise,” Fields said. “Of course, the stats aren’t going to show that but I felt pretty comfortable out there in the passing game.

“And I’ve just got to keep improving and just keep getting better.”

The shoulder definitely didn’t slow his running as he broke off a 55-yard touchdown toward the right side. That made Fields the first NFL quarterback since at least the start of the 1925 season with three TD runs of at least 50 yards in a season.

Fields faked out cornerback Keisean Nixon near the line of scrimmage and raced untouched to the end zone.

“The D-end just crashed like crazy,” Fields said. “They brought tons of pressure on that. I mean, it was just me and the nickel (cornerback).

“The guys did a great job downfield blocking and we scored the touchdown.”

Fields thought he could have run even faster. But it had nothing to do with the shoulder injury or leg cramps he suffered in a loss at Atlanta two weeks earlier.

“I just felt like I was moving slow, not my top speed,” he said. “I got to check my top speed on the GPS.”

A 56-yard pass Fields threw in the second quarter to Equanimeous St. Brown set up a 7-yard TD run one play later by David Montgomery. Fields completed a 49-yard pass to N’Keal Harry on a jump ball in the fourth quarter, but kicker Cairo Santos had a 40-yard field goal try blocked by Dean Lowry with the Bears hoping to pad a 19-17 lead.

“I think the O-line did a great job protecting,” Fields said. “The run game was solid. And I think the passing game took a big step today.

“I just felt comfortable out there going through the progressions and stuff like that.”

But the Bears again couldn't convert in the closing minutes.

They failed to take the lead or tie with an opportunity in the closing minutes for the sixth straight time this season.

Trailing 20-19, the Bears had a first down at the Green Bay with about three minutes remaining. Fields tried to hit Equanimeous St. Brown, but Jaire Alexander jumped in front of the receiver for an interception at the 28.

“Their corner made a nice play,” coach Matt Eberflus said. “He jumped it. Hopefully our receiver can knock that down if possible.”

The Bears' next possession ended when Green Bay’s Keisean Nixon picked off Fields at the 5-yard line with 51 seconds left, sealing Fields' fourth loss in as many starts against the Packers.

Fields looks forward to when the Bears are able to finish late drives with wins, regardless of opponent.

“It would be fun,” he said. “We haven’t had that feeling in weeks. Just the feeling, there’s none like it. The wins are going to start coming. I thought as an offense we got better today. I can’t wait until they start coming.”