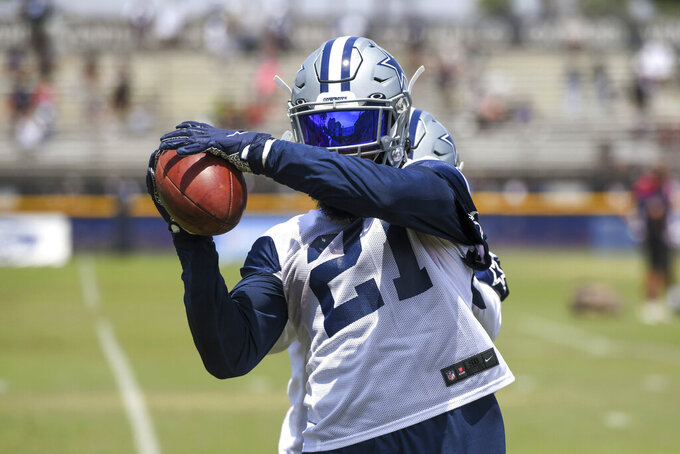 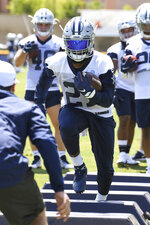 Ezekiel Elliott is the lightest he's been in nearly a decade and believes he hasn't lost the breakaway ability that helped make him a two-time NFL rushing champion for the Dallas Cowboys.

The star running back didn't need much motivation to get in that kind of shape coming off career lows for a 6-10 team decimated by injuries on offense in a dispiriting debut for coach Mike McCarthy last year.

“You don’t need more motivation than that,” Elliott said after the first practice of training camp in Oxnard, California, on Thursday, his 26th birthday.

“I just know the type of player I am. I don’t think I showed that last year. I got a lot to prove. I just made sure I didn’t leave any doubt out there that I didn’t do as much as I needed to do.”

Elliott's work with personal trainer Josh Hicks showed up on social media throughout the offseason, and teammates raved while the 2016 All-Pro stayed mostly silent and let them speak for him.

He posted a picture of his well-defined abs not long before camp, and Elliott wasted no time speaking for himself.

Elliott led the league in rushing as a rookie in 2016 and again two years later. In between, he had the NFL's best per-game average while serving a six-game suspension over domestic violence allegations.

The decline has been steady since, leading plenty to believe Elliott peaked early and was wilting under the workload. Injuries hit the offensive line the hardest in 2020, but quarterback Dak Prescott's horrific season-ending ankle injury in Week 5 got most of the attention.

Those missing pieces effected Elliott perhaps more than anyone, and he finished with career worsts of 979 yards and eight total touchdowns. The three-time Pro Bowler made it worse with a rash of fumbles that led to him tying his career high with six.

Now Elliott says he reported for camp at 218 pounds, matching his weight from when the former Ohio State star was a freshman in 2013.

“He’s a magnet full of energy,” McCarthy said. “The production on the field is not a concern. The production will be there with the opportunity. Like a lot of things last year, you clearly understand what the numbers reflect. But also there was a lot of adversity that played into that.”

The biggest concern for Elliott is a significant drop-off in big plays. His first three years, Elliott had 41 plays of at least 20 yards, including an 83-yard touchdown on a screen pass that was perhaps the best display of his burst.

The past two years, Elliott has just 10 plays of at least 20 yards, which is part of the reason the focus with Hicks in the offseason was on “short-area quickness.”

“I think I'm quicker,” said Elliott, who mentioned Hicks while also giving credit to his personal chef for his weight loss.

“I’ve heard as you get older in this league you want to start losing weight, and nutrition has played a big part of that,” Elliott said. “I feel good where I am.”

The Cowboys are training in California for the first time in two years after the pandemic kept them — and the 31 other teams — home last year. It's been three years for Elliott, who held out the entire preseason in 2019 before signing a $90 million, six-year extension that kicks in with a $13.7 million salary cap hit this season.

Dallas gave Elliott the big contract thinking the club was on the verge of its first Super Bowl run in nearly 25 years. Instead, the Cowboys missed the playoffs, didn't give coach Jason Garrett a new contract, hired McCarthy and again didn't qualify for the postseason.

When Elliott ran for a career-best 1,631 yards as a rookie, the Cowboys were the top seed in the NFC East. Two years later, Dallas won its first playoff game with the No. 4 overall pick in 2016. But now the Cowboys have missed the playoffs more than they've made it with Elliott.

“I think the hardest part about last year is you feel like you let your teammates down,” Elliott said. “That hurts. I want to make sure I put my best step forward and do everything I need to do to help this team win.”

Elliott tried to prove that in the offseason.

NOTES: DE DeMarcus Lawrence opened camp on the physically unable to perform list following what McCarthy said was a “cleanup” procedure on his surgically repaired back. K Greg Zeurlein also had back surgery, and punter Hunter Niswander will handle kicking duties in camp until he returns. ... WR Amari Cooper, who had offseason ankle surgery, also is on the PUP list along with DT Trysten Hill, who missed most of last season with a torn knee ligament, and rookie DL Chauncey Golston (hamstring).