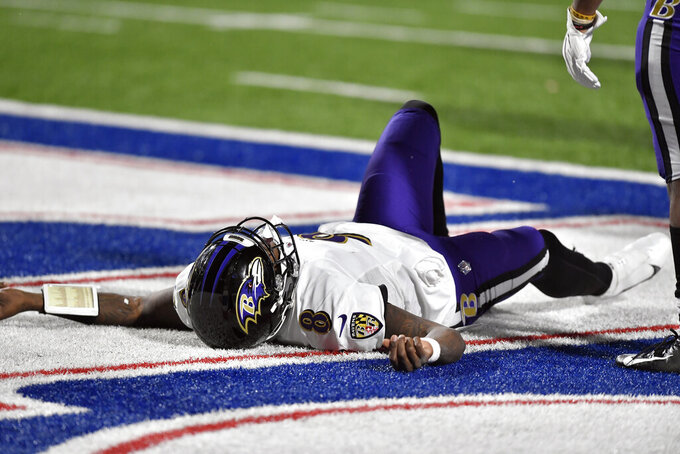 Baltimore Ravens quarterback Lamar Jackson (8) lies on the ground after being injured during the second half of an NFL divisional round football game against the Buffalo Bills Saturday, Jan. 16, 2021, in Orchard Park, N.Y. Jackson left the game after his injury. (AP Photo/Adrian Kraus)

When the Baltimore Ravens look back on their 2020 season, they'll remember rallying from a team-wide surge of COVID-19 to reach the playoffs for the third successive year before defeating Tennessee on the road for their first postseason victory since January 2015.

The Ravens will also recall their final game, a frustrating 17-3 loss on a windy night in Buffalo. The setback was particularly disappointing because their performance just wasn't up to the standard of an organization that expects nothing less than to be the last team standing.

“It’s unfortunate, three years in a row being in the playoffs and not making that push to reach our full potential,” receiver Willie Snead said.

Safety Chuck Clark said: “The next step for us is just to finish."

After closing the regular season with five straight wins and knocking off the AFC South champion Titans, Baltimore (12-6) came up flat against the Bills.

The usually automatic Justin Tucker had two field-goal tries clang off the uprights, the team was flagged for eight penalties and the offensive line had difficulty protecting star quarterback Lamar Jackson.

Jackson, the reigning NFL MVP, was limited to 34 yards rushing and threw an interception that was returned 101 yards for a touchdown. He also was forced to chase several errant snaps, the last one before he absorbed a crushing hit that gave him a concussion and forced him to miss the entire fourth quarter.

That put an end to an unusual season in which the Ravens endured 10 straight days with at least one player testing positive for COVID-19. The outbreak forced two games to be rescheduled and contributed to a three-game skid that dropped Baltimore's record to 6-5.

“The outbreak was obviously unfortunate, but no one saw that coming. We all thought we were doing a great job with it," fullback Patrick Ricard said. “It's been crazy year, that’s for sure. This is a year to remember for everybody. But I’m excited for this offseason to get better, and hopefully, we won’t have another one of these crazy years again.”

From start to finish, the pandemic influenced the Ravens. The rookies learned on the fly during training camp because there were no minicamps. most meetings were done online, several practices were canceled and there was no face-to-face team meeting before the players headed home for the offseason.

“We usually get together as a team in the same room and just feel that energy of what just happened and kind of (review) the ride of the season," Ricard said. “We didn’t get to do any of that. What we did was, we had a virtual team meeting."

When they get together again, the roster will be different. The quest, however, will remain the same.

“In this offseason, it’s going to be hard. It’s going to burn a little bit, and it should," defensive tackle Calais Campbell said. “Hopefully, it’ll push us to work as hard as we have ever worked before, and we come back and find a way to win this next year.”

Jackson ran for 1,005 yards to become the first NFL quarterback with two 1,000-yard seasons. He also won a playoff game for the first time after losing in his first two seasons.

Next year, the 24-year-old will strive to be a better passer. No team in the NFL had fewer yards through the air.

“That’s the competitor in him, to want to get better each and every offseason, to fix the little things that his game needs improvement on and continue to get better as a passer," Snead said. “If he knuckles down on that part of his game and really reaches his full potential in that area, then the sky is the limit."

Another speedy target would help Jackson, whose lone deep threat was Marquise Brown.

Outside linebacker Matthew Judon, who had the franchise tag, understands that his future in the NFL might not be in Baltimore, even though he contributed six sacks during the regular season.

“If they want me here, this is home. This has been home since I got in the NFL," he said. “If not, I enjoyed my five years.”

Veteran running back Mark Ingram began the season as the starter but by the end of the season was placed on the inactive list during game days, taking a backseat to Gus Edwards and J.K. Dobbins. It is unlikely Ingram will be asked to return.

Most players, however, should be welcomed back.

“Honestly, I believe that we have the right people in place to get the job done," Campbell said.

ON THE FRONT LINE

The Ravens lost starting left tackle Ronnie Stanley (ankle) and tight end Nick Boyle (knee) in the middle of the season, creating a major shift on the line in front of Jackson.

Next year, Orlando Brown Jr. can move back to right tackle, tight end Mark Andrews can worry less about blocking and the Ravens will be better equipped to protect Jackson than they did in Buffalo.

The Ravens are motivated to do better in the playoffs next year, and a tweak of the roster might be enough to get it done. The idea is to build the team around Jackson's unique talent.

“I know we have a lot of guys just ready to go that are still hungry for it," cornerback Marlon Humphrey said. “I think we have a lot to build on next year. I know we have the quarterback, the guy we need. That’s a big key piece. We've got that, so we can build around that.”