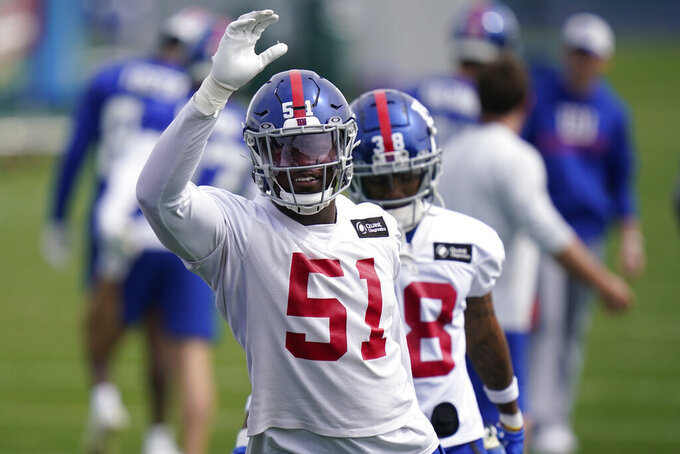 EAST RUTHERFORD, N.J. (AP) — The New York Giants not only have two promising young tackles on the end of the offensive line, they now have two young talented edge rushers on the defensive line.

The bookend pairs were completed when second-year linebacker Azeez Ojulari passed his physical and was removed from the non-football injury list. He had reported to training camp with a hamstring injury and wasn't cleared to practice until Sunday.

When Wink Martindale's defense took the field, there were times when Oljuari was on one end of the line and rookie Kayvon Thibodeaux, the No. 5 pick overall in the draft, was on the other. During camp, they will be matched often against left tackle Andrew Thomas, the No. 4 pick in 2020, and Evan Neal, the No. 7 overall pick this year.

Ojulari led the Giants with eight sacks in his rookie season and added 49 tackles. The athletic Thibodeaux was considered one of of the nation's top edge rushers coming out of Oregon.

“We’ve got that same energy, same motor,” Ojulari said after practice of his similarities with Thibodeaux. “We’re definitely going to push each other and feed off of each other’s energy and just get after people.”

For the first 2 1/2 weeks of camp, Ojulari wore a non-contact red jersey and worked with the trainers away from practice. He attended team meetings and insisted Sunday that he has not fallen behind his teammates in learning the new defense.

Thibodeaux and Ojulari are outstanding athletes — quick off the ball, and have good length and strength.

“Definitely explosive, and not just those two,” Thomas said. “We’ve got a pretty good outside linebacker group right now. I’m excited to see what they do.”

The rusher all should benefit from Martindale's aggressive defense, which tends to bring rushers from all angles.

Ojulari probably is not going to be ready for the Giants' preseason game at home against the Cincinnati Bengals on Sunday.

NOTES: The Giants waived CB Michael Jacquet and G Josh Rivas and terminated the contract of DB Jarrod Wilson. ... Coach Brian Daboll said starting LG Shane Lemieux will be out at least a week with a foot injury. T Jamil Douglas (ankle) and CB Cor'Dale Flott (groin) also were hurt in the preseason opener against New England and missed practice Sunday. ... C Jon Feliciano, who had dehydration problems early in camp, did not finish the workout. LBs Jihad Ward and Ellerson Smith left the field early. Among the players who did not practice were DL Leonard Williams, WRs Wan'Dale Robinson and Kadarius Toney and LB Blake Martinez.