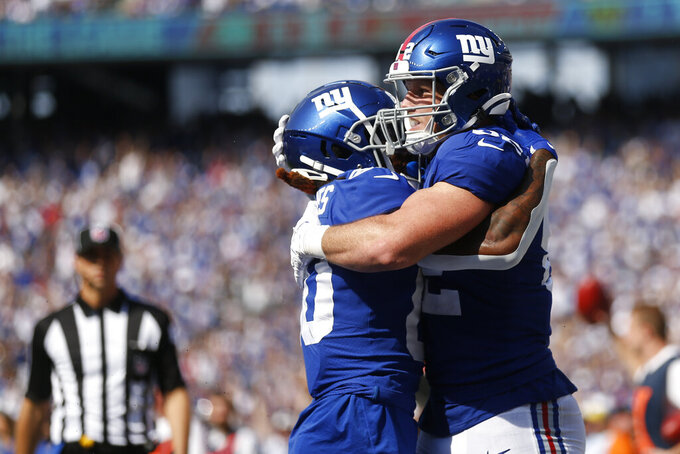 OPENING LINE: Giants by 2 1/2, according to FanDuel SportsBook.

TURNOVER DIFFERENTIAL: Cowboys minus-1; Giants plus-1.

COWBOYS PLAYER TO WATCH: LB Micah Parsons leads the NFL with four sacks and is the first with 17 sacks in his first 18 career games since the stat became official in 1982. The reigning NFL Defensive Rookie of the Year leads a unit that held the offenses of Tom Brady and Joe Burrow to a touchdown apiece. It’s the fewest TDs allowed through two games by the Dallas defense since 1996. Parsons lined up entirely on the defensive front against the Bengals, but the Cowboys say they still plan to move him around.

GIANTS PLAYER TO WATCH: Saquon Barkley leads the NFL in rushing (236 yards) and is second to Miami’s Tyreek Hill in yards from scrimmage (282). He also has caught nine passes for 46 yards. This is the healthiest he has been since his rookie season in 2018.

KEY MATCHUP: The Giants offensive line against Parsons and the Cowboys defense. New York has run the ball effectively, gaining an average of 120.5 yards, while Dallas is yielding an average of 119.5. Pass protection is another issue. Daniel Jones has been sacked eight times. Parsons leads the league with four sacks and Dallas has eight.

KEY INJURIES: Parsons is dealing with an ankle issue, but says it isn’t a factor. ... WR CeeDee Lamb also appeared to injure a lower leg against the Bengals, but wasn’t sidelined and said nothing was getting him off the field. ... TE Dalton Schultz sprained his right knee late in the Cincinnati game and his status is iffy. ... WR Michael Gallup is getting close to a return after tearing an ACL last January. ... Giants top DL Leonard Williams hurt a knee last week. Starting CB Aaron Robinson missed last week after having his appendix removed and is iffy again. Starting OLs Azeez Ojulari (calf) and Kayvon Thibodeaux (knee) have missed the first two games but are getting closer.

SERIES NOTES: The Cowboys have won 9 of 10 against the Giants. ... Backup QB Cooper Rush is facing an NFC East opponent for the first time in his third career start over two seasons, subbing for an injured Dak Prescott.

STATS AND STUFF: Rush is 2-0 filling in for Prescott and is the sixth NFL quarterback to lead game-winning drives in his first two starts. ... Johnny Unitas was the first with Baltimore in 1956. T.J. Yates was the most recent with Houston in 2011. Former Cowboys coach Jason Garrett and two-time Super Bowl winner Roger Staubach are the only Dallas QBs to win their first three starts. ... The Cowboys are tied for the fewest trips inside the 20 with two. Both ended with TDs against Cincinnati. ... RB Ezekiel Elliott’s most recent 100-yard game was October against the Giants (110 yards and a touchdown). ... WR Noah Brown had a career-high 91 yards receiving and his first NFL touchdown against the Bengals. His catch kick-started the drive leading to Brett Maher’s game-winning 50-yard field goal. ... The Cowboys have one takeaway after leading the NFL with 34 last season. ... Maher is 3 for 3 on game-winning kicks in two stints with the Cowboys. ... Giants PK Graham Gano kicked four field goals last weekend. He has the only two games in team history with two 50-plus-yard field goals in the fourth quarter or overtime. ... In their two wins, New York has scored in the final 3:34. This is the first time it has won consecutive games scoring so late since 2001. ... Daboll is the fourth Giants' coach to win his first two regular-season games. Former Cowboys Dan Reeves (1993) is the only Giants coach to start 3-0. ... QB Daniel Jones is hitting almost 71% of his passes with three TD passes and one interception. ... Journeyman WR Richie James leads the Giants with 10 catches for 110 yards and is averaging 12.4 yards on punt returns.

FANTASY TIP: Dallas RB Tony Pollard has done well against the Giants. He had 75 yards rushing on 14 carries in their previous game and also caught four passes for 28 yards. His 5.7 yard average on all plays this season is 12th among running backs. He scored his ninth career rushing touchdown last weekend.