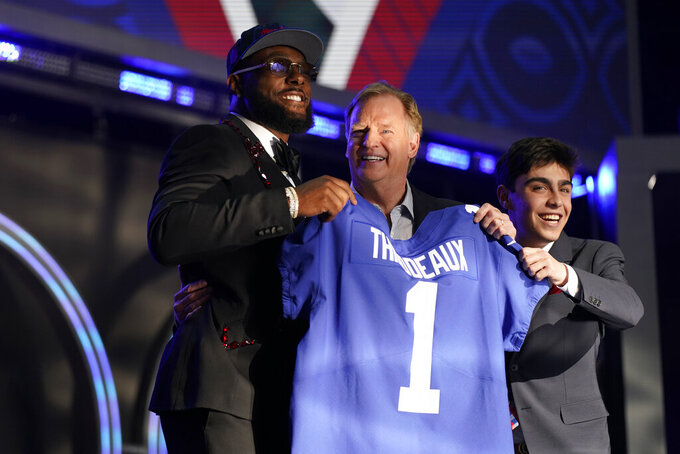 Oregon defensive end Kayvon Thibodeaux, right, stands next to with NFL Commissioner Roger Goodell after being picked by the New York Giants with the fifth pick of the NFL football draft Thursday, April 28, 2022, in Las Vegas. (AP Photo/John Locher ) 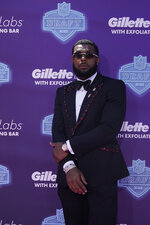 The Giants had major needs for an offensive tackle and an edge rusher heading into the first round Thursday night and the draft played right into his hands.

Coming off a 4-13 season, the Giants took edge rusher Kayvon Thibodeaux of Oregon and tackle Evan Neal of Alabama with the No. 5 and 7 overall picks, respectively.

“Both are 21 years old, young players,” said Schoen, the former Buffalo Bills assistant general manager who was hired to replace Dave Gettleman. “Both still have upside to develop, but you know it worked out great. We’re happy.”

If there was anything surprising it was the order in which the players were selected. The Giants had a bigger need at tackle than a pass rusher, but there was an early run on defensive players. Schoen said he took Thibodeaux at No. 5 because there was a drop-off at the edge spot after him.

With three good tackles available, he knew he would get one at No. 7.

Neal will be a bookend to Andrew Thomas. Thomas has played the left side since being drafted in 2020, and Schoen said Neal would start working on the right side for new coach Brian Daboll.

Before the draft Schoen said he would be willing to listen to teams looking to trade. He said no one called to talk about the No. 5 pick and there were three teams who were interested in No. 7.

However, Schoen said the Giants really felt good about six players and some remained when they picked, so they took them.

Daboll said the draft room was calm and composed.

“I think you can be that way when you prepared, when you put the time in and have conversations before things happen,” Daboll said. “I can’t tell you how many different scenarios we went through the past week. So we felt we would be ready for whatever decisions we had to make.”

The Giants had plenty of needs coming into the draft, but the offensive line and putting pressure on opposing quarterbacks were the top two.

Thibodeaux is a fast rusher who makes plays in the backfield with uncanny burst and length. He is a former five-star recruit and seemed destined to be a first overall draft pick after his freshman season, but between injuries and a shortened pandemic season he never put together a fully dominant year.

He will fit into defensive coordinator Wink Martindale's variety of multiple schemes.

Neal has size and explosive athleticism. He started 40 games for the Crimson Tide and missed only one game (COVID-19) in his three-year career.

“The Giants are going to get a guy that is going to come in every day and work his hardest to be the best that he can be and just ultimately help the organization win,” Neal said.

When the Giants selected Neal it made it 14 straight years in which the Crimson Tide has had a first-round selection, tying the record set by Miami from 1995-2008.

New York has had five straight losing seasons and has not been to the playoffs since 2016.

Schoen confirmed the Giants did not pick up the fifth-year option on quarterback Daniel Jones, the No. 6 pick in the 2019 draft.

“We really like Daniel and the work he’s been putting in and we’re excited where he is and excited to work with him,” Schoen said. “It was just a decision we thought was best the New York Giants at this time.”

The Giants will have the fourth pick in the second round and two more in the third. They could use help at wide receiver, safety, cornerback and tight end.