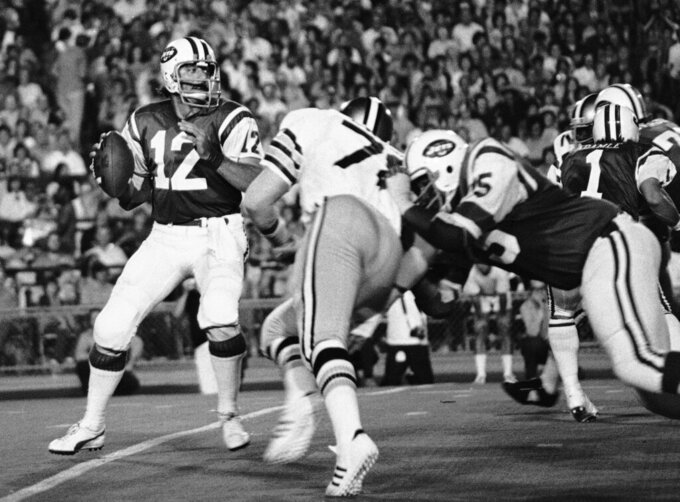 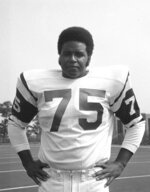 NEW YORK (AP) — Joe Namath was recovering from knee surgery in his hospital room just a few weeks after being drafted by the New York Jets when he heard a knock at his door.

And in walked a hulking mountain of a man.

It was left tackle Winston Hill, who wanted to introduce himself to the quarterback he would be tasked with helping protect for the rest of his NFL career.

“He and his wife Carolyn were just so nice,” Namath recalled of that day in 1965. “It was our first meeting and I can’t tell you how impressed I grew to be with Winston as a man and his family.

The late Hill, who died in 2016, was posthumously selected last year for the centennial class of the Pro Football Hall of Fame after a 15-year career during which he established himself as a durable force on the offensive line — and a favorite of his teammates.

“He was always business on the field — with a smile,” Namath said. "Even when he helped me up off the ground sometimes, man, there was a little concern but that smile showed up, boy. Every player on our teams — plural — through the years, was a friend of Winston. And Winston made sure of that."

The 6-foot-4, 270-pound Hill certainly was easy to like off the field because of his affable, teddy bear-like personality. He also was a fierce and dependable presence on it.

“I guess DNA has a lot to do with it,” Hill told the team's website in 2010 when he and Namath were among the first six inductees into the Jets' ring of honor. "Along with a hard work ethic.”

His toughness can't be overstated. Hill was able to play through a broken leg in 1965 and he remained in the lineup nine years later after his throat was injured when someone stepped on it.

“He never missed a ballgame and he was always there to stand up and fight for you,” former Jets running back Emerson Boozer said. “You don't see too many guys like Winston in the game. Winnie was always there when you needed him."

Hill and the rest of the centennial class of 2020 will be part of the induction festivities inducted next week in Canton, Ohio, after last year's ceremony was postponed because of the pandemic.

“It was about time,” Boozer said of Hill getting elected. “The big guy was well deserving.”

Hill's family acknowledges there's a bittersweet aspect to the moment, considering both Winston and Carolyn are no longer here to share it with their loved ones — including their daughters Heather and Hovlyn and son Marc.

“I can immediately imagine my dad and his face, kind of biting his lip with his dimples showing and going, ‘It happened,’” Hovlyn Hill-May said. “My mother would be freaking out since she was his biggest champion. We had a party in our family on Earth and I think in Heaven as well.”

Hill grew up in Joaquin, Texas, where he was a tennis and football star in high school. He played on both the offensive and defensive lines at Texas Southern, where Hill's family has started a scholarship endowment in Winston's name. Hill was also inducted into the Black College Football Hall of Fame in June.

The Pro Football Hall of Fame held an enshrinement ceremony in Canton in April for the nine inductees who are being honored posthumously — and the families unveiled the bronze busts of their loved ones that will be on display.

“When we lifted the shroud to look into our dad’s face — the artist did such an incredible job — it was emotional,” said Heather Hill, who'll perform the national anthem before one of the two induction ceremonies. “It was our dad in his prime and health and strength, and it was just beautiful.”

Hill was chosen by Baltimore in the 11th round of the 1962 NFL draft. After the Colts released him in August 1963, Hill signed with the Jets the next day. He ended up becoming one of the franchise's greatest players.

Hill made a club-record eight All-Star teams for the Jets, the first five at left tackle and the last three on the right side. He also was selected in 1970 for the AFL’s all-time second team.

“He never talked about individual honors for himself," Namath said. “Never, ever."

While Namath is largely credited for leading the Jets to what is still their only Super Bowl title in 1969 after his famous guarantee, the quarterback insists Hill and the offensive line played just as big a part, along with the defense, in the 16-7 victory over Baltimore. Matt Snell ran for 121 yards and a touchdown, and New York finished with 142 yards rushing.

“We got most of our running yardage on that left side that day,” Namath said. “And one of the reasons, of course, was because of Winston and the talent we had on the left side."

Hill played his final NFL season with the Los Angeles Rams in 1977 — again with Namath as his teammate.

“Yeah, I still see that face, I see that smile,” Namath said. “I remember different things that we’d done together. I wish he were still here.”

After retiring from football, Hill moved to Denver and opened a BBQ and ribs restaurant while also focusing on his family. He and Namath remained close, just as they were on the field during their playing days.

“I watched him and how he treated other people in different get-togethers, whether they were reunions, camps dealing with children and football," Namath said. ”And life and God were always more important. I mean, football, he used that as a tool to teach more important things about life and God.

“And Winston was on the money, man. He was always right on time.”

By Kyle Hightower 16 minutes ago
By Tom Withers an hour ago
By Teresa M. Walker an hour ago
4 hrs ago
9 hrs ago