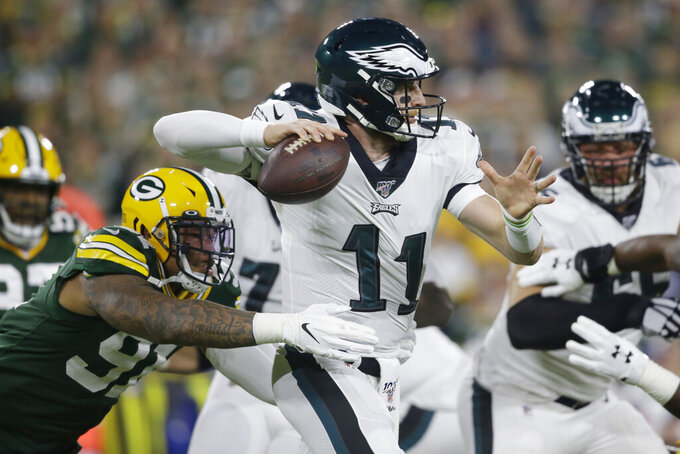 Philadelphia Eagles quarterback Carson Wentz is pressured by the defense of Green Bay Packers outside linebacker Preston Smith during the first half of an NFL football game Thursday, Sept. 26, 2019, in Green Bay, Wis. (AP Photo/Jeffrey Phelps)

GREEN BAY, Wis. (AP) — This Green Bay Packers defense still could wind up among the league's best by the end of the season. Those quarterback-pressuring, turnover-causing performances over the first three weeks weren't suddenly negated by one night.

Carson Wentz, Jordan Howard and the rest of the Philadelphia Eagles exposed several trouble spots the Packers will have to examine, though, in this 34-27 decision on Thursday night fueled by a three-touchdown second quarter and aided by two turnovers by Aaron Rodgers.

The Packers (3-1) forced only one three-and-out by the Eagles, in the third quarter. They allowed 176 rushing yards, with Howard carrying the ball 15 times for 87 yards and two touchdowns and taking three catches for 28 yards and another score. They failed to sack Wentz, letting him slip out of their grasp for throwaways or scrambles on a handful of plays, and unlike the Eagles against Rodgers, were unable to force any turnovers to halt a drive or shift the momentum in the game.

After taking some steps forward last season in their first year under defensive coordinator Mike Pettine, the Packers added three starters in free agency — linebackers Preston Smith and Za'Darius Smith and safety Adrian Amos — and picked up a pair of first-round draft picks for the defense, too, with linebacker Rashan Gary and safety Darnell Savage.

The spruced-up group made quite the first impression in the season opener on a prime-time stage in Chicago, holding the defending division champion Bears to 46 rushing yards, sacking Mitch Trubisky five times and intercepting him once in the throwback 10-3 win.

The Packers forced four turnovers by rival Minnesota the following week, picking off Kirk Cousins in the end zone in the fourth quarter to stave off a Vikings rally and a preserve 21-16 victory. Then they dominated Denver with six sacks, five total by both Smiths, and three more turnovers to fuel a 27-16 decision.

Against the Eagles, they forced punts on the first two drives while Rodgers completed his first 10 passes and guided the Packers to a 10-0 lead. But after a 67-yard kickoff return by Miles Sanders, the Eagles had their first short field. Wentz connected with Alshon Jeffery for his first of three touchdown passes, and the Eagles were right back in the game after a five-play march.

"This was a team that really enjoyed being in third-and-long situations. I guess every defense does," Eagles center Jason Kelce said. "But we knew that we needed to be able to run the ball on first and second down if we were going to have success."

With Jeffery drawing plenty of attention from the Packers secondary, DeSean Jackson out with an abdominal injury for the second straight game, and the struggling Nelson Agholor a nonfactor, Wentz went to work with tight ends Zach Ertz and Dallas Goedert . The Eagles often used a fast-tempo, no-huddle attack to keep the Packers from catching their breath.

"He was getting the ball out quick, but they've got a great O-line," Za'Darius Smith said. "We're just going to continue to do what we do, man, and get past this 'L' and focus on next week."

With Howard and Sanders chewing up the middle of the defense with a steady diet of basic inside zone runs, the Eagles delivered the knockout blows in the second half. They sandwiched that lone three-and-out with a pair of eight-play touchdown drives that covered 76 and 75 yards.

"We know we've got to build from it. It's just a bump in the road. It happened early in the season, but we can learn from it. We can improve on a lot of things in this game when we watch this film," Preston Smith said, later adding: "We've got to be better than we were tonight, because this wasn't us. We didn't show y'all who this defense really was tonight."

Though they made up for it in other ways against the Vikings and Broncos, the Packers were vulnerable against the run. That troubling trend continued against the Eagles, with a total of 523 yards and five touchdowns rushing allowed now over the last three games.

"I know we better fix it. Otherwise teams are going to, that's going to be their blueprint to beating us. They're going to try to run the football and grind it out," coach Matt LaFleur said. "We've got to do a much better job."