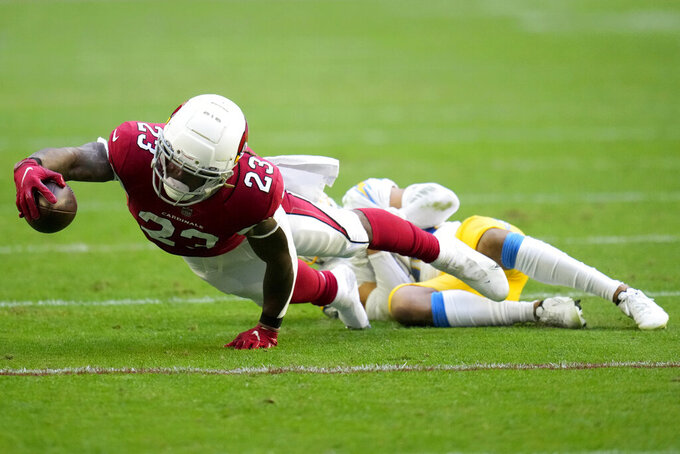 Arizona Cardinals running back Corey Clement (23) lunges for a first down against the Los Angeles Chargers during the second half of an NFL football game, Sunday, Nov. 27, 2022, in Glendale, Ariz. (AP Photo/Ross D. Franklin)

GLENDALE, Ariz. (AP) — Los Angeles Chargers coach Brandon Staley knew he was going for the winning 2-point conversion a few minutes before it actually happened, so when the moment arrived, there was no hesitation and no looking at his playbook.

The result was even better than he imagined.

“Smooth like chocolate milk," Staley said with a grin.

Justin Herbert threw a 1-yard touchdown pass to Austin Ekeler with 15 seconds left, then hit Gerald Everett for the decisive conversion to give the Los Angeles Chargers a 25-24 win over the Arizona Cardinals on Sunday.

Ekeler barely got into the end zone for the TD that moved the Chargers within one, capping a seven-play, 38-yard drive that lasted 1:33. The ball hit the pylon as he dived toward the corner.

That set up Staley's bold if predetermined call. Herbert hit Everett for a clean catch despite plenty of traffic near the goal line.

“We just believed in each other,” Herbert said. “That's one of those plays that we've repped a ton over the last couple of years. We feel comfortable with the guys out there. Gerald ran a great route, made a great catch.”

Herbert completed 35 of 47 passes for 274 yards and three touchdowns for the Chargers (6-5), who snapped a two-game skid while staying in the thick of the AFC playoff race. Arizona (4-8) has lost four of five, leaving it with almost no shot at making the NFC playoff field.

Herbert now has led 10 fourth-quarter comebacks in his three seasons. But with opportunities to win the past two weeks in similar situations, the Chargers fell short.

“That's what it's like when you're a quarterback in the NFL," Staley said. "You're not going to make every 2-minute drive, but the thing he has going for him is that our entire organization believes he's going to make it. He brought us back, game ball for him.

“Big-time performance. We couldn't have won without him.”

The Chargers have trailed by 10 or more points at some point in the first half in each of their last four victories. They were down 14-0 against Cleveland and 10-0 against Denver, Atlanta and Arizona.

The Cardinals took a 24-17 lead early in the fourth quarter when Kyler Murray threw a short pass to James Conner for a 6-yard touchdown. The veteran running back had 25 carries for 120 yards, his first 100-yard rushing game in two seasons with the Cardinals.

Murray threw for 191 yards, two touchdowns and an interception and ran for a score after missing the previous two games with a hamstring injury.

Arizona got some big defensive stops in the fourth quarter but the offense couldn't run out the clock. The Cardinals got the ball back with 2:19 left, but went three-and-out in just 31 seconds.

DeAndre Carter had a 20-yard punt return, and a 5-yard penalty set up the Chargers deep in Cardinals territory for the winning drive.

“We had our chances,” Cardinals coach Kliff Kingsbury said. “I think both teams played well enough to win. They made the plays at the end, unfortunately we didn't. Our offense got it back twice — went three-and-out — can't do that against a good team.”

Arizona took a 17-14 lead into halftime when Murray ran for a 5-yard touchdown just before the break, capping a 14-play, 75-yard drive.

The Cardinals had their top two receivers, DeAndre Hopkins and Marquise Brown, on the field for the first time this season. Arizona jumped to a 7-0 lead late in the first quarter when Murray threw a pass over the middle to Hopkins, who spun out of a tackle and sprinted to the end zone for a 33-yard touchdown.

Matt Prater's 43-yard field goal on the Cardinals' next drive made it 10-0.

The Chargers quickly cut that margin midway through the second quarter when Herbert threw a 2-yard touchdown pass to Keenan Allen.

After Murray was intercepted, Herbert found Carter for a 33-yard touchdown and a 14-10 lead. Carter finished with seven catches for 73 yards along with the key punt return.

Chargers: At Las Vegas next Sunday.

Cardinals: After a bye, host New England on Monday, Dec. 12.