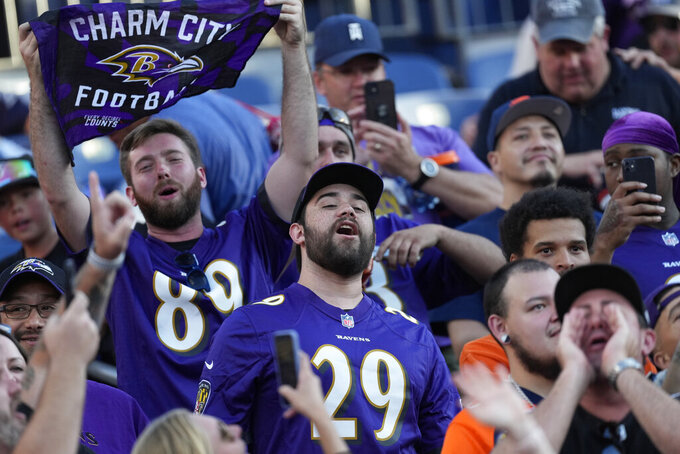 Baltimore Ravens fans cheer during the second half of an NFL football game against the Denver Broncos, Sunday, Oct. 3, 2021, in Denver. (AP Photo/David Zalubowski)

The fans are back and the crowds are loud, but home-field advantage still isn't a factor early in this NFL season.

Road teams have won 33 of the 64 games over the first four weeks, extending a trend that began in 2019 and continued through the pandemic-impacted 2020 season when games were played in front of few, if any, fans.

The .484 winning percentage for home teams is the sixth-worst since the merger through four weeks of game action. This is the third straight season that home teams failed to have a winning record through four weeks, something that hadn't happened before that since 1983.

There was some expectation that would change this season when road teams again would have to deal with loud crowds that forced silent counts and made running offense more difficult. But that hasn't contributed to more home wins.

Perhaps no team has exemplified the home-field woes more than the San Francisco 49ers the past two years. The Niners are 1-6 at Levi's Stadium in that span, lost all three games as the designated “home team” in Arizona when they relocated last year because of COVID-19 protocols and are 7-3 in true road games.

The Niners look to improve to 3-0 on the road this season when they travel to Arizona this week. Denver also puts its 2-0 road mark on the line this week at Pittsburgh.

After a rough start to the 2021 season for the heralded rookie QB class, there was some signs of progress in Week 4.

Chicago's Justin Fields and Zach Wilson of the Jets came out on the winning side last week, marking the first time this season a rookie QB won a game started against a non-rookie. It also marked the first time since Week 3 in the 2019 season that two rookie QBs earned their first win in the same week. Daniel Jones and Gardner Minshew did it that week.

San Francisco's Trey Lance also got his most extensive action when Jimmy Garoppolo left at halftime with a calf injury and threw for two TD passes in the second half in a loss to Seattle.

New England's Mac Jones went toe-to-toe with Tom Brady and Tampa Bay before falling just short at the end because of a missed field goal, and Jacksonville's Trevor Lawrence had his most efficient game of the season before falling to Cincinnati.

Only third-rounder Davis Mills struggled with four interceptions and 87 yards passing in Houston's 40-0 loss to Buffalo.

The five first-rounders posted a 99.3 rating for the week, with six TDs and three INTs. They had combined for 14 interceptions and three touchdowns the previous two weeks and came into the game with a 63 rating.

The Bills posted their second shutout already this season, following up a 35-0 Week 2 win against Miami with a 40-0 victory over Houston.

Buffalo joined eventual Super Bowl champions Baltimore (2000) and Washington (1991) as the only teams since 1990 to record two shutouts in the first four games.

The Bills were also the first team since the 2009 Jets to have two shutouts of 35-0 or better in the same season. New York beat the Raiders 38-0 and Bengals 37-0 that season.

Reid won his 100th game in the regular season or playoffs with the Chiefs to go with the 140 he had in 14 seasons with the Eagles, becoming the first coach to win at least 100 games with two franchises.

Mahomes threw five TD passes in his 50th career start. The Chiefs have won 40 of those as Mahomes joined Hall of Famer Ken Stabler (40-9-1 with the Raiders) as the only QBs in the Super Bowl era to win at least 40 times in their first 50 starts.

Seattle's Russell Wilson also hit a milestone mark, winning his 100th career regular-season game last week, joining Peyton Manning as the only QBs to do that in their first 10 seasons.

Several teams are off to good bounce-back starts so far this season, with seven of the 12 teams that have won at least three games having missed the playoffs in 2020.

Arizona (4-0) leads the way, making the Cardinals the lone undefeated team in the NFL for the first time since starting 7-0 in 1974.

Carolina, Cincinnati, Dallas, Denver, Las Vegas and the Chargers are all 3-1 so far after missing the playoffs last season.