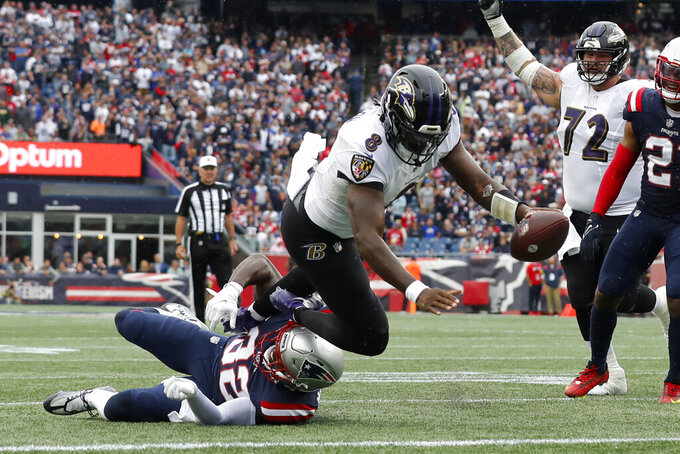 OWINGS MILLS, Md. (AP) — Forget what you used to expect from the Baltimore Ravens — when they were winning a couple of Super Bowls with stout defense and quarterback play that was sometimes great, sometimes not.

So far in 2022, the Ravens have a leaky defense. They also have a game changer at quarterback, and through three games, Lamar Jackson has been exactly what his team needs.

Jackson threw for four touchdowns and ran for one Sunday, leading Baltimore to a 37-26 victory over New England. It was the second road win of the season for the Ravens, and it was a crucial one with Buffalo and Cincinnati coming to town next.

It was also an important recovery for a Baltimore team that blew a 21-point fourth-quarter lead in a 42-38 loss to Miami the previous week.

The Ravens (2-1) allowed 447 yards, but after New England took a 20-14 lead in the third quarter, Baltimore scored two touchdowns and a field goal on its next three possessions. Jackson finished with 107 yards rushing and a passer rating of 110.3.

“I just want to win,” Jackson said. “I just got to do what I do, play Lamar football.”

It's not just Jackson. The whole offense is humming right now despite the fact that Baltimore was down to its fourth choice at left tackle because of injuries to Ronnie Stanley, Ja'Wuan James and Patrick Mekari.

Only Jacksonville, with 38 points against the Chargers, scored more points than Baltimore on Sunday, and a week earlier, the Ravens put up 38 in their loss to Miami.

“If you ask any defensive coordinator or head coach in this league, they’ll tell you that this offense is hard to defend,” Harbaugh said Monday. “Executing and then keeping it going and coming up with ways to keep people off balance, that’s what coaches do, that’s what coordinators do. I really believe Greg is one of the very best in the business at that.”

The defense allowed all those yards and 26 points to a New England team that scored 24 in its first two games combined. There was still too much space for opposing receivers, although the Ravens avoided getting beat over the top for long touchdowns as they did against the Dolphins.

The low point was probably allowing New England to drive into field-goal range in the final 30 seconds of the first half, then allowing a touchdown when the Patriots started with the ball in the second. The Ravens were opportunistic though, forcing four turnovers.

Justice Hill missed last season because of an Achilles injury, and even then he was somewhat overshadowed because fellow running backs J.K. Dobbins and Gus Edwards were out with knee injuries. Now Hill is back and taking advantage of his opportunity in the Baltimore backfield. He ran for 60 yards on six carries Sunday.

After scoring a long touchdown in each of the first two games, Rashod Bateman had only two catches against New England and lost a fumble after one of them.

Harbaugh said he didn't have an update on DT Michael Pierce, who left the game in the second quarter with an arm injury. ... Mekari didn't return after an ankle injury, and LB Justin Houston left with a groin injury.

Dobbins returned for his first game since his knee injury and had 23 yards on seven carries.

6.87 — Baltimore's total yards per offensive play, which ranks No. 1 in the NFL at this point.

The Ravens will be tested defensively when they host Josh Allen and the Bills on Sunday, and then Joe Burrow and the Bengals are up the following weekend.