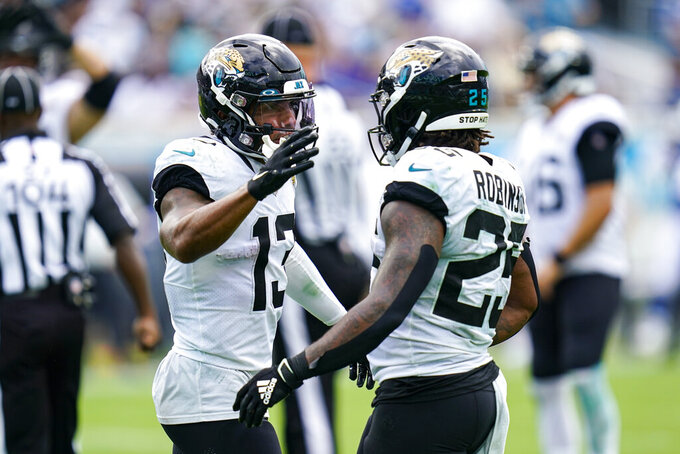 OPENING LINE: Chargers by 7, according to FanDuel SportsBook.

AGAINST THE SPREAD: Jacksonville 1-1; Los Angeles 2-0.

TURNOVER DIFFERENTIAL: Jaguars plus-5; Chargers plus-2.

JAGUARS PLAYER TO WATCH: WR Christian Kirk has 12 catches for 195 yards and two touchdowns, giving Trevor Lawrence a go-to receiver and coach Doug Pederson a chess piece who lines up in the slot, in the backfield and out wide.

CHARGERS PLAYER TO WATCH: OLB Joey Bosa has 3 1/2 sacks and five tackles for loss in three games against Jacksonville. He had two sacks in a 49-10 romp over the Jaguars in 2019, one of 10 career games with at least two sacks.

KEY MATCHUP: Chargers RB Austin Ekeler vs. Jaguars rookie LB Devin Lloyd. Given the uncertainty at quarterback and on the offensive line for Los Angeles, Ekeler will have to step up as a runner and receiver. He has struggled on the ground through two games, averaging just 2.68 yards per carry. Lloyd is a familiar name on the West Coast from his time in college at Utah, and the first-round pick got his first career interception in the decisive win over Indianapolis.

KEY INJURIES: The Jaguars don’t have a player on their injury report for the second consecutive week, a rare stretch of health for any NFL franchise. ... Chargers QB Justin Herbert is questionable to play after he fractured rib cartilage against the Chiefs. Chase Daniel would make his first start since 2019 if Herbert cannot go. ... C Corey Linsley (knee) missed practice Wednesday, while RT Trey Pipkins III (foot) was a limited participant. ... WR Keenan Allen (hamstring) returned to practice this week after sitting out against Kansas City and is questionable.

SERIES NOTES: The Chargers have won the past two meetings and eight of the past nine. ... The Jaguars are 0-5 against the Chargers in California. ... Herbert got his first NFL win against Jacksonville in 2020, throwing for 347 yards and three touchdowns without an interception and running for a score.

STATS AND STUFF: The Jaguars have forced at least three turnovers in consecutive games for the first time since 2019. ... WR Marvin Jones Jr. has caught a pass in 116 straight games, the fourth-longest active streak in the NFL. ... Jacksonville has five different defenders that have intercepted a pass. ... The Jaguars have outscored their opponents 16-0 in the third quarter. ... OLB Josh Allen has forced a fumble in consecutive games to start the season. He had three forced fumbles in his first 40 games. ... Now in his second season backing up Herbert, Daniel has yet to throw a pass for the Chargers. ... Los Angeles has not allowed a rushing touchdown this season. ... Ekeler had 101 yards rushing and 112 yards receiving against Jacksonville in 2019. He needed just eight carries and four receptions, the fewest total touches in NFL history to top 100 yards rushing and receiving. ... The Chargers have one run of at least 10 yards, a 12-yard carry by backup RB Joshua Kelley against Las Vegas. ... S Derwin James Jr. needs 11 tackles in the next two games to pass Johnathan Cyprien (282) for most by a defensive back through his first 40 games going back to 1991. ... OLB Khalil Mack ranks second in the NFL in sacks (3 1/2) and is tied for fifth in tackles for loss (3).

FANTASY TIP: No one will expect much out of the Chargers passing game if they have to turn to Daniel, but WR Mike Williams could still be worth using. Daniel frequently targeted another big-body option that can be productive in the red zone, and Allen Robinson ended up making seven receptions for 97 yards and two touchdowns for the Bears in London the previous time Daniel started an NFL game.