Jalen Hurts gets first start vs. Saints, NFL's No. 1 defense 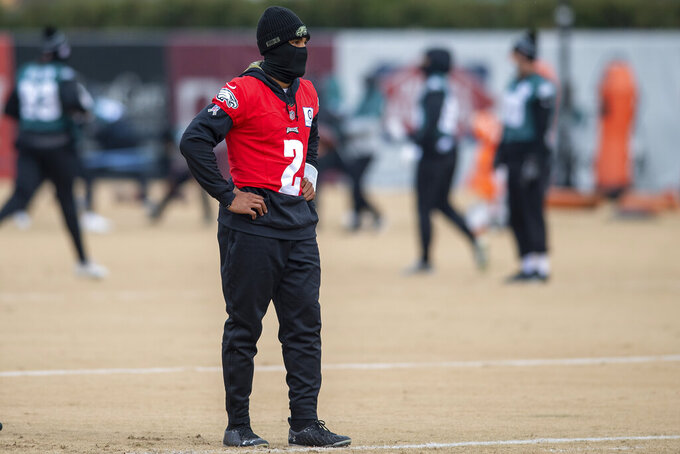 Hurts, the 2019 Heisman Trophy runner-up, takes over for Carson Wentz and leads the Eagles (3-8-1) against the New Orleans Saints (10-2) on Sunday. The Saints have the NFL’s No. 1 ranked defense.

Welcome to the league, rook.

“We are playing against a great defense so we have to do what we can to control the controllable, control our effort, control our execution, control our mindset and go out there and play a hard-fought game,” Hurts said.

Hurts replaced Wentz in a loss at Green Bay last week and completed 5 of 12 passes for 109 yards, one touchdown, one interception and took three sacks.

Wentz is struggling through the worst season of his five-year career, but he’s not the only reason Philadelphia’s offense has played so poorly.

“You feel bad he’s the sole one taken the hit right now,” three-time All-Pro center Jason Kelce said. “Obviously, the entire offense has been terrible: offensive line, running backs, receivers, coaches. You aren’t this bad unless everybody shares blame in this whole thing.”

The Saints have won nine straight, including three in a row with Taysom Hill as their starting quarterback. Drew Brees is eligible to return this week but his status won’t be determined until closer to game time.

With Hill under center, the Saints’ offense has increasingly taken on the personality of a hard-nose running attack. New Orleans has eclipsed 200 yards rushing in each of the past two games.

“The run game has been the emphasis for us the last couple weeks,” right tackle Ryan Ramczyk said. “When you can run the ball at will and just keep hammering the ball, it definitely wears on a defense. We know that if we can do that, we can have a lot of success.”

Saints safety Malcolm Jenkins spent six seasons in Philadelphia, helping the Eagles win the Super Bowl in 2017. But the Eagles released him this year in a cost-cutting move. Eagles defensive coordinator Jim Schwartz had high praise for Jenkins.

“He’s probably the smartest player I ever coached,” Schwartz said in a 415-word response about Jenkins.

With Hurts running the offense, the Eagles may emphasize the run game far more than they ever did with Wentz. Miles Sanders is averaging 5.3 yards per carry but only has 16 rushes in the past two games.

“I think in order to get (Hurts) success, you’ve got to attempt and try to establish a little bit of the run game,” coach Doug Pederson said. “Then he can be a part of that, I think, and just go out and maybe try to find some easy completions. The quick game or a screen here and there, something that can just kind of get him into the flow of the game. This is the No. 1 defense, it’s no easy task.”

The Saints have won their past two games without left tackle Terron Armstead in what has been the latest example of steady play by New Orleans’ offensive front despite seemingly constant personnel shuffles.

Two weeks ago, left guard Andrus Peat was out with a concussion.

“We’ve got guys that can go play on Sundays and do a really good job. I think we all mesh well. I think we all communicate well up front,” Ramczyk said. “We’ve had to do some shuffling, but overall I think everyone’s on the same page.”

The Saints have climbed to the top of the NFL in total defense while giving up just two touchdowns in their past five games. Defensive tackle Sheldon Rankins, who returned from an injury last week, said the unit always had confidence in its talent level and needed a few games earlier this season to develop cohesion.

“We’re just finally hitting that level of consistency where the preparation and the mental aspect is meeting the physical tools and the physical abilities that we know the players on this defense have,” Rankins said. “You’re just seeing guys going out and playing the right way, playing with effort, playing with energy. Guys know their assignments. And guys are just flying around. There’s no thinking. There’s no hesitating. Guys are just playing ball the right way and you see the results.”