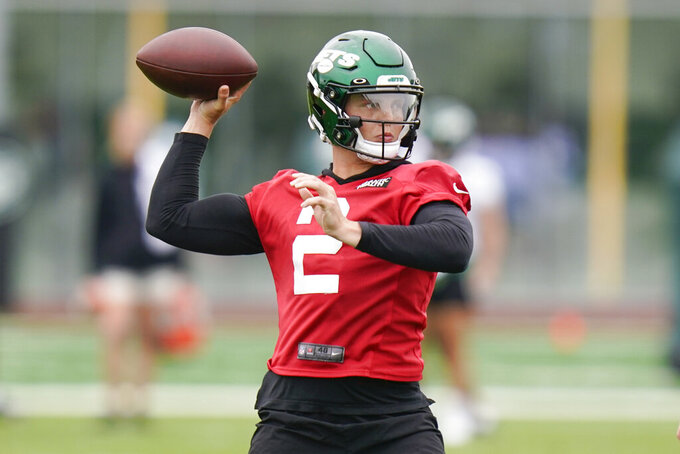 FLORHAM PARK, N.J. (AP) — Zach Wilson is unquestionably the main focus this offseason for the new-look New York Jets. And it's not about just the progress of his on-field skills.

That's key, of course, but the second-year quarterback's physical appearance is already the talk around the facility.

“You guys will see him. He's thick,” coach Robert Saleh said Tuesday with a big laugh.

Saleh might soon run out of appropriate adjectives to describe the looks of Wilson, who he said “looks beefy” earlier this month when asked about the QB's clear dedication to a diet plan and the weight room the past few months.

“That dude's beefy,” a smiling Wilson said of his muscular head coach when told of Saleh's comments.

One thing's for sure: Wilson looks a bit different. His neck is a bit thicker, his legs and arms more muscular.

“He looks good, he looks confident — his shoulders are back, he’s not caved in," Saleh said before the team's second practice of organized team activities. "He’s confident, he’s smiling, he’s vocal.

"You can always tell the confidence level and their understanding of what they’re being asked to do by the volume of their voice. And he’s getting pretty loud.”

And getting into better shape.

“I think that's probably the first time in my life I've taken a bigger approach on the nutrition side of it rather than just the lifting,” the 22-year-old Wilson said. “Of course, every year you do your typical strength training, lifting and running. But typically, you just try to eat healthy.”

Instead, Wilson worked with Jets dietician Nicolette Mense to develop a better game plan for meals.

“I actually have a written plan of how much to eat, when to eat and tracking everything down to the macro,” Wilson said. “That's probably been the biggest difference as far as being able to put good weight on.”

The 6-foot-2 Wilson said he was at 208 pounds at the end of last season and is up to 221 now. He wants to play around 218 this season, when he'll be heavily relied on to make big improvements in his play. He finished with nine touchdown passes and 11 interceptions in 13 games as a rookie — but wasn't picked off in his last five contests.

That was a clear sign things were slowing down for him mentally. And he thinks making improvements physically will help him even more on the field. He already feels he has extra stamina throughout an entire practice and having more muscle on him will help when he's getting hit and tackled during the season.

“I mean, that was the goal,” Wilson said. “I definitely feel like from past experiences of putting weight on, too, that I feel more athletic, faster the more weight muscle that I put on. ... I just feel like I’m a better athlete with more weight on me for some reason.”

One thing has been tough for Wilson to sack, though, while trying to stick to his new diet.

“I do have a sweet tooth pretty bad,” he said with a laugh. “So that's been the challenge is the cookies and the cakes and those kind of things.”

While he's taking charge of those cravings, Wilson is also showing an increased leadership on the field and in the locker room.

“I think that’s needed, especially from a quarterback, is somebody that can get everybody on the same page and bring them in,” he said. “And I’ve never been the super, super vocal type, the guy to get up in front of the team. But sometimes that’s needed. And I think it means more when it does come.”

Saleh said Wilson clearly has a much better understanding of the playbook than he did, especially from a year ago at this time when he was just starting to figure out life in the NFL.

Wilson spent part of the offseason traveling to different areas to work with some of his playmakers, trying to build an even better on-field rapport. He said he expects to gather several of his teammates together for some workouts in July before training camp begins.

The new diet and look combined with a better understanding of coordinator Mike LaFleur's offense should be significant factors in helping Wilson improve greatly while moving through the rest of the offseason.

“It’s a blast to get back out there,” Wilson said. “The guys, the additions that we have, the little wrinkles that we added within the offense, and then just the challenge of seeing what we did last year and then trying to apply it and get better as a unit is a lot of fun.”

NOTES: Saleh said a few players were not in attendance for the OTAs, but declined to name them while citing that the sessions are voluntary. ... Saleh did confirm OT Mekhi Becton was among them, saying it was expected since Becton's girlfriend gave birth to their first child a few days ago.