LaFleur remembers how challenging it was facing Zimmer's D 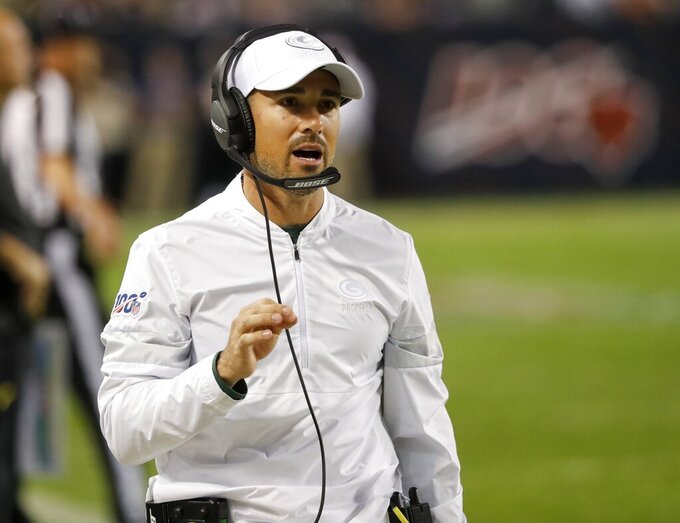 Zimmer's defensive unit held LaFleur's offense to a single touchdown when the two squared off nearly two years ago in Minnesota. Zimmer was 10 games into what would eventually be a 13-3 season with an appearance in the NFC championship game for him in his fourth season as Vikings head coach. LaFleur was enjoying his first and only season as offensive coordinator for the Rams, who would finish 11-5 and lose in the wild-card round.

The two will square off again Sunday when LaFleur and the Packers welcome Zimmer's Vikings to Lambeau Field.

"It certainly is going to be a good task for our offense and a good measuring stick to see where we're at, see how much we can improve from last week," LaFleur said Monday.

LaFleur's offense managed just one touchdown in a 10-3 win last week against Chicago, which boasts one of the top defenses in the league. The 10 points tied for the fewest Green Bay has scored against the Bears since Rodgers became the starting quarterback in 2008. LaFleur said he anticipates another tough chess match when he sees Zimmer on the opposite sideline on Sunday.

"He stresses you," LaFleur said. "He presents a lot of similar looks, and they do a lot of different things off of those looks. Then you combine that with the talent they have, and again on all three levels of that defense, they've got Pro Bowlers everywhere."

LaFleur, play-caller and head coach Sean McVay, quarterback Jared Goff and the Rams' offense opened the game on Nov. 18, 2017, in Minnesota with a nine-play, 70-yard drive. The drive was capped by a 6-yard rushing touchdown by Todd Gurley. Los Angeles never scored again.

LaFleur and the Rams ended with 179 yards on their final nine drives and lost 24-7.

The Vikings hired Zimmer in January 2014 after allowing the second-most yards and the most points in the NFL during the 2013 season. Zimmer had spent the previous five seasons as the Bengals defensive coordinator. Zimmer directed Cincinnati to a top-10 finish in yards and points allowed in four of his five seasons.

Minnesota's defense, led by linebacker Anthony Barr, started the season by getting four sacks and forcing three turnovers in a 28-12 win over the Falcons.

A challenge LaFleur will face on Sunday that he didn't have to worry about against Zimmer's Vikings two seasons ago was Dalvin Cook.

The third-year running back missed 12 games as a rookie in 2017 with a torn ACL and five more games last season with a hamstring issue. But Cook was ready for the opener Sunday, carrying the ball 21 times for 111 yards and two touchdowns.

Cook, who earned his third 100-yard outing in his 16th game, gives a new dimension to the Vikings' offense, an offense that is all too familiar to LaFleur.

What the Vikings did well against the Falcons and also two years ago was run the ball. Latavius Murray led Minnesota with 95 yards and two scores on the ground against LaFleur and the Rams in 2017.

LaFleur has emphasized since Day 1 of his tenure in Green Bay is the importance of establishing the run. The 47 rushing yards the Packers' offense had last week won't be enough against the Vikings and LaFleur knows it.

"As an offense, everybody needs to be better," he said. "And again, it starts with the coaches, myself and the offensive coaches."