Lloyd, US women ease past Portugal in front of record crowd 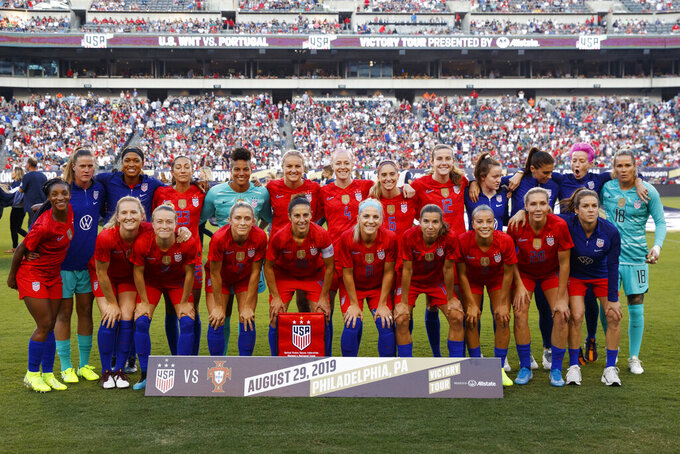 PHILADELPHIA (AP) — Carli Lloyd had a goal and an assist in front of her hometown fans, and the U.S. women's national team continued its post-World Cup victory tour with a 4-0 win over Portugal in front of a record crowd on Thursday night.

The announced attendance of 49,504 at Lincoln Financial Field was the largest ever for a stand-alone friendly game for the U.S. women, breaking the previous mark of 44,028 set in Pittsburgh during the team's 2015 victory tour.

Tobin Heath, Morgan Brian and Allie Long also scored for the U.S., which has won 15 consecutive matches for the first time since 1996. Christen Press had two assists.

The five-city domestic tour to celebrate the Americans' fourth World Cup title, which they won in France this summer, began in Los Angeles on Aug. 3 with a 3-0 win over Ireland. It will continue with stops in St. Paul, Minnesota (Sept. 3), Charlotte (Oct. 3), and Chicago (Oct. 6).

Lloyd, a Philadelphia-area native who made national news when she kicked a 55-yard field goal at Philadelphia Eagles training camp last week, led the team out of the tunnel holding the World Cup trophy.

The two-time FIFA player of the year scored early in the second half to make it 3-0, before celebrating by flapping her arms like an eagle. Her cross in the 82nd minute set up Long's goal and put a finishing touch on the rout.

"I don't play for goals. I just want to help the team and continue to improve as a player," Lloyd said. "But to have been able to score in front of a home crowd, in the Eagles' stadium, it's pretty awesome."

As for the possibility of kicking field goals in the NFL, which has been gaining steam over the past week, Lloyd said that her first priority is continuing her national team career and making the 2020 Olympic squad. After that, she said she is eager about the opportunity to possibly become the first female NFL player.

"Nothing rattles me," the 37-year-old said. "I've got ice through my veins. You can say what you want; I'll come back and make you look stupid."

The U.S. pounced on Portugal early, with Heath finishing a cross from Press in the fourth minute. Julie Ertz, whose husband Zach Ertz plays in the same stadium as a tight end for the Eagles, set the play up with a good ball to Press.

Brian netted her first goal since 2016, off Press' corner kick in the 18th minute.

Goalkeeper Adrianna Franch, making her second international appearance, needed only to make one nice save against overmatched Portugal, FIFA's 30th-ranked side.

"In terms of just our popularity, I think this is a team that has not just captured his nation but has captured the world," said Ellis, who will step down following the victory tour after five-plus years in charge. "And that's basically what you're getting out there — you're feeling the love from the fans."

U.S. stars Alex Morgan and Megan Rapinoe did not play because of injury. Neither did Rose Lavelle, who scored the final goal of the World Cup final, a 2-0 victory over the Netherlands on July 7.