Matt LaFleur gets first taste of defeat as Packers coach 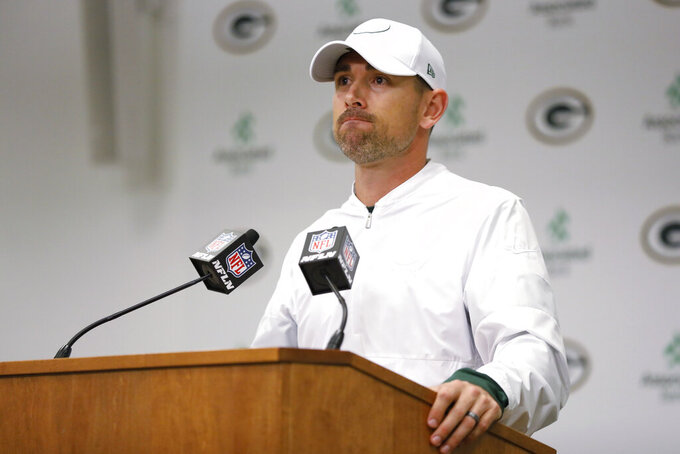 LaFleur got his first taste of defeat as Green Bay's coach Thursday night with the Packers' 34-27 home loss to the Philadelphia Eagles.

"I think you can find a lot out of a lot of people in times of adversity," said the 39-year-old first-year coach. "This is our first real test of adversity, but I think we have the right character. I think we've got the right leadership in that locker room that our guys will stick together."

After allowing 35 points through the first three games, the Packers (3-1) surrendered that much in 60 minutes Thursday. It was Green Bay's first home loss in September with Aaron Rodgers as its starting quarterback (14-1-1). It also was Rodgers' first career defeat when leading by 10 or more points at any point at home (58-0-1).

"There's a lot to build on, and the frustrating thing is a home game, a winnable game, a good opponent, that we just didn't execute the way we should've to win that football game," Rodgers said. "... I think we're a good football team. To be a great football team, you have to win these kind of games when you're playing really good opponents."

Despite the loss, Rodgers and the Packers' offense put up a season-high 491 yards of total offense and tied a season high with 27 points.

After a monster season last year, wide receiver Davante Adams had his breakout game of the young 2019 campaign. The two-time Pro Bowler had a career-high 180 yards on 10 catches just six days after he and his wife, Devanne, welcomed their new baby girl, Deija Leigh, into the world.

Green Bay also got a big night from Jimmy Graham. The 10-year veteran was shut out the past two weeks but rebounded with his second touchdown of the season and season highs in catches (six) and yards (61).

For the third straight week, the Packers' run defense was flat-out bad. Philadelphia rushed 33 times for 176 yards (5.3 yards per carry) and two scores. It was the third week in a row an opponent had run for 149 yards or more.

"Just from an execution standpoint, we've got to get better at staying in our gaps, having better discipline on the backside of runs and just overall performing better," defensive tackle Dean Lowry said.

Geronimo Allison. With Adams' immediate availability hanging in the balance due to a toe injury, Allison could see his targets increase. Allison had three catches for 52 yards and a touchdown on Thursday. The fourth-year receiver had only managed five receptions for 24 yards and a score through the first three games. Allison didn't see a single pass come his way in the season opener.

"I'm very, very excited for him and the progress that's he's showing and the leadership that he's showing for our room, because we do have some young players," wide receivers coach Alvis Whitted said of Allison.

Aaron Jones. The third-year UTEP product scored a touchdown in his sixth straight home game on Thursday. That's the longest streak in franchise history. But after Jones' score, he had an overall quiet night with just 13 rushes for 21 yards, and that was with fellow running back Jamaal Williams being evaluated for a concussion. Jones now has just 38 yards on his last 23 carries.

LaFleur said Friday that Williams, who was carted off the field Thursday following the first play from scrimmage, was well enough to return home after spending the night in the hospital. Jones said he visited Williams during his stay and Williams was "making jokes." Adams, who suspected he has turf toe following Thursday's loss, underwent an MRI on Friday. LaFleur said he will have "a better indication of where we stand once we get through the weekend."

After playing three games in 11 days, the Packers now have about a week and a half to heal, rest and prepare for a road matchup against the Cowboys on Oct. 6.